Commerson’s dolphins show typical dolphin curiosity towards humans and will readily approach boats to bowride and wake ride. They are energetic and active, often performing figure of eight swim-patterns underneath boats, spinning underwater and leaping clear of the water. Commerson’s dolphins also appear to enjoy surfing on waves close to shore.

Commerson’s dolphins are small, chubby dolphins with cone-shaped heads and no beak. Their most obvious feature is their sharp black and white markings. The body (back and belly) is mainly white and the throat is white. Their heads, faces, flippers, dorsal fin and tail are black. Their flippers are small and paddle-shaped and their tail flukes have rounded tips. The dorsal fin is large and rounded; it looks like one of Mickey Mouse’s ears.

Commerson’s dolphin babies are grey, black or brown; they change colour and develop vivid markings as they get older. Juveniles are black and grey and adults are black and white.

Commerson’s dolphins are generally found in shallow coastal waters in small groups of fewer than ten individuals but they can gather seasonally in groups of up to 100 for feeding and breeding.

Commerson's dolphins are fast, active swimmers. They like to bow-ride and swim upside down, spinning underwater. They jump out of the water frequently and they are at home in shallow turbulent water, often surfing on breaking waves close to shore.

Commerson’s are social dolphins and can often be seen swimming with other species such as Peale’s dolphins, Burmeister’s porpoise Chilean dolphins

What do Commerson's dolphins eat?

Commerson’s dolphins eat a wide variety of coastal prey including schooling fish such as hake, sardines, silversides and anchovies; squids, marine worms, shrimps and occasionally seaweed. They are not fussy eaters and take advantage of seasonally available prey in their local area.

Where do Commerson's dolphins live?

Commerson's dolphins are found close to the shore in cold waters along open coasts, in sheltered fjords, bays, harbours and river mouths, and occasionally in the lower reaches of rivers. They prefer water less than 200m deep.

There are currently two recognised subspecies; the South American Commerson’s dolphins live in coastal waters of Argentina, southernmost Chile, and the Falkland Islands (Islas Malvinas); the second subspecies is the Kerguelen Commerson’s dolphins which live only in the coastal waters of the Kerguelen Islands in the southern Indian Ocean. The two subspecies are separated from one another by 8500 km (5280 miles) of ocean.

On 13 November 2004, a Commerson’s dolphin was seen swimming off the coast of South Africa which is over 4000km from the Kerguelen Islands and more than 6000km from South America.  Nobody knows how this little dolphin ended up so far from home. Scientists call dolphins like this ‘vagrants’. 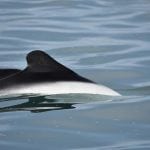 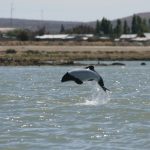 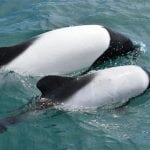 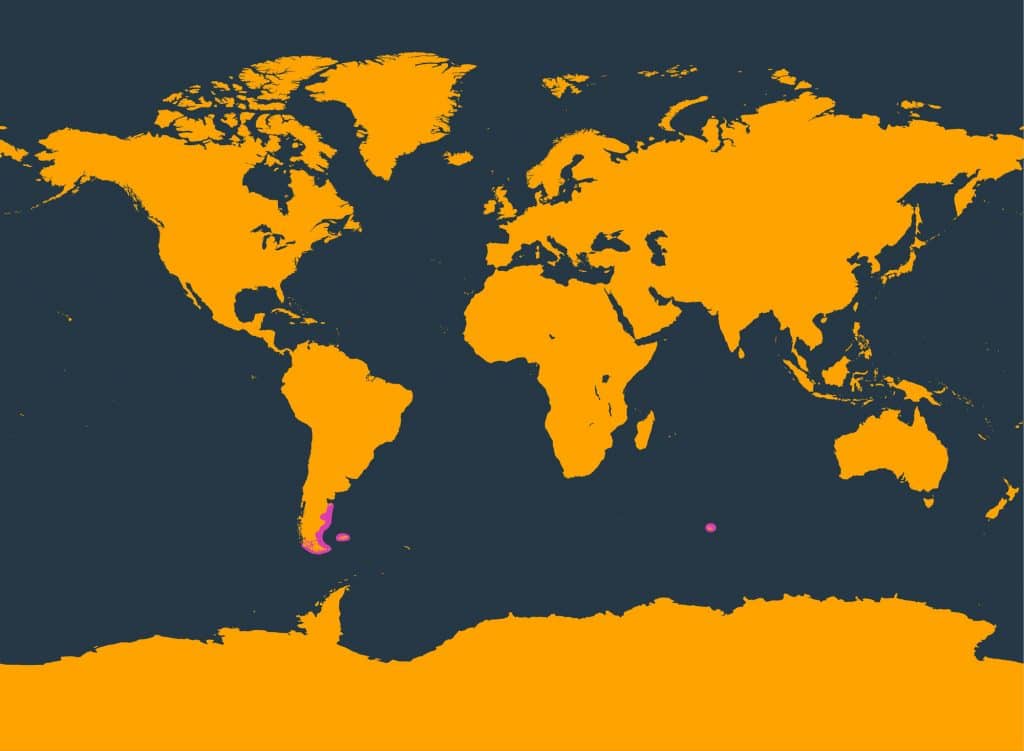 Commerson’s dolphins are named after French naturalist Dr Philibert Commerson who first discovered them in the Strait of Magellan in Chile in 1767.

The detailed colouration of each dolphin is unique, making it possible to use this feature to identify individual dolphins. Cuts and scars on the body and notches in the dorsal fin are also used to recognise individual Commerson’s dolphins.

We do not know how many Commerson’s dolphins there are in the world. We do know that their distribution is limited both in terms of locations where they are found and the fact they are limited to shallow coastal habitats. They are very vulnerable to human threats.

Around the Falklands (Malvinas) and Kerguelen Islands, as well as off mainland Argentina, Commerson’s dolphins are have been seen swimming in or at the edges of kelp forests. When they are feeding in tidal areas in front of small rivers, in kelp forests and in waters influenced by river discharge, they are more typically alone or in small groups.

You can help save Commerson's dolphins...

By supporting WDC, you can help Commerson's dolphins to live safe and free. Together, we can: