We are working to ensure a future for the critically endangered North Atlantic right whale. Fewer than 340 whales survive today.

Hunted since the 11th century, right whales were nearly extinct when they finally received protection from whaling in 1935. Even so, the population has struggled to recover as they face mounting modern-day threats from accidental entanglements in fishing gear, vessel strikes, and climate change.

Since its incorporation in 2005, WDC’s North American office has run a dedicated programme to save this imperiled species and implement protective measures to save right whales from those threats. For example, WDC has worked to develop and implement rules to reduce vessel strikes, successfully reducing the risk of a fatal collision by 80-90% in US waters, and to increase federally designated critical habitat to cover nearly 40,000 square miles of the US East Coast.

Sadly, the unprecedented loss and/or injury of at least 92 endangered North Atlantic right whales since April of 2017 has caused considerable alarm. In November 2022 it was estimated that fewer than 340 remain. 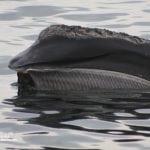 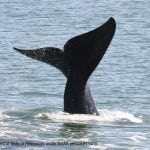 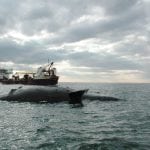 The recovery of large whales is key to combatting climate change and saving our own future. Emerging research demonstrates that whales act as ecosystem engineers and provide the much needed nutrients to phytoplankton, tiny ocean plants that create least 50% of our oxygen, annually sequester hundreds of thousands of tons of carbon, and provide a base for the marine food web leading to abundant fish stocks. We need right whales to survive - our future depends on it.

In response to a changing climate, right whales have changed their habitat patterns since 2010 which has increased their risk of entanglements and vessel strikes.

Female right whales aren't living as long as males, leaving fewer mature females to bear calves and add to the population number and long-term survival of the species. Only ~70 reproductively viable females remain.

With your help, we can ensure a future for right whales.

WDC has been appointed by the US government to the Atlantic Large Whale Take Reduction Team, a federal stakeholder group working to increase protections for right whales. With our partners, WDC is working with fishermen to test fishing gear that will significantly reduce the chances of a whale becoming entangled; petitioning the US government to increase protections from vessel strikes; and ensuring that offshore energy proposals do not impact this endangered species.   . Through public education, we will reach as many people as possible - boaters on the water, students, families, and the general public - to share the plight of North Atlantic right whales.