Humpback whales in the Gulf of Maine, USA

Home > About whales & dolphins > Conservation and research projects > Humpback whales in the Gulf of Maine, USA

Humpback whales in the Gulf of Maine are one of the most well-studied humpback populations in the world and WDC has been helping protect whales in this vital feeding ground for more than 20 years.

We coordinate our own research projects as well as contribute our data to other long-running data sets, including both the Gulf of Maine and North Atlantic humpback whale catalogs.

Non-invasive photo identification research allows us to identify individuals and their families, monitor their health, track their migrations and estimate overall population size. Research on this population indicates that about 70% of calves return to the Gulf of Maine feeding area where their mothers first brought them, indicating that this is an important habitat for whales of all ages. We know that these whales migrate from the Gulf of Maine to their breeding grounds in the West Indies, facing multiple threats along the way.

Gulf of Maine humpback whales were removed from the US Endangered Species List in 2016, but it is evident that there is a negative cumulative impact to them (and all whale species) from human’s use of the ocean. Many are killed or injured by vessel strikes and entanglement in fishing gear each year. They are disturbed by ocean noise on a daily basis. They have to catch their food while trying not to ingest dangerous marine debris that can block their digestive tract. 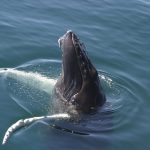 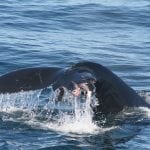 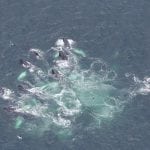 Between January 2016-June 2018, nearly 80 humpback whales in the North Atlantic died as part of an ongoing Unusual Mortality Event (UME). Declared by US authorities, the UME indicates that a higher than normal number of whales has been found dead and additional investigation into the cause is warranted. Of the whales necropsied (autopsied), about 50% showed signs of human interaction. The UME is still active as scientists continue to review these cases.

Our data collection programmes aim to collect concrete data that can be used to inform managers about whale distribution and habitat use in order to better protect their ocean homes from potential threats they face. Here are a few of our projects:

Each year we recruit 6-10 interns to carry out fieldwork through our partnerships with responsible whale watching companies in Massachusetts. While onboard, they are educating passengers, collecting sightings and photographic data, and processing data into our sightings database, which in turn supports our policy initiatives. Our interns get firsthand experience to launch their careers, and about 75% of our former interns have stayed active in the field of marine conservation.

We are investigating threats in areas of the mid-Atlantic US east coast where humpbacks have been documented feeding throughout the year, some perhaps staying to eat rather than migrating to the Caribbean breeding grounds in the winter months.  We are working with research partners and responsible whale watch companies in this region to better understand whale habitat use and residency times to better mitigate threats.

Some Gulf of Maine humpbacks seem to learn a behaviour called kick-feeding from their peers, indicating that the population has a social structure and individual whales have personalities as they each perfect their own technique of this behavior. We are analyzing video recordings of this behavior among individuals to determine who is teaching who, and whether a particular technique may be more effective, with the goal of documenting the presence of social learning and culture within the population.

Our research on small vessel impacts indicates at least 1 in 10 humpbacks in the southern Gulf of Maine will be struck by a vessel during their lifetime and these collisions are highly underreported. These findings support the need for the development of operational guidelines applicable to vessels of all sizes transiting in the vicinity of whales.

WDC will continue to use our data to inform federal and state agencies, provide public comments on proposed projects that have the potential to harm whales and their habitat, and collaborate with other research organizations to better protect this species.

Please help us protect these humpback whales and their homes

By adopting a humpback, by making a donation, or by fundraising for WDC, you can help us save these amazing creatures.

Adopt a whale and follow the lives of these amazing creatures.

Run, bake, walk, cycle… what could you do to help?