How did whales evolve?

Home > About whales & dolphins > How did whales evolve?

Looking at a whale’s body and biology, there are plenty of clues that their ancestors lived on land. They breathe air and nurse their young with their own milk, they also have paddle-shaped flippers which encase hand bones with five ‘fingers’. As embryos, whales have tiny back limbs which disappear before birth.

How did whales and dolphins evolve? WDC experts explain.

Hippos are the closest living relatives of whales, but they are not the ancestors of whales. Both hippos and whales evolved from four-legged, even-toed, hoofed (ungulate) ancestors that lived on land about 50 million years ago. Modern-day ungulates include hippopotamus, giraffe, deer, pig and cow. Unlike the hippo’s ancestor, whale ancestors moved to the sea and evolved into swimming creatures over a period of about 8 million years.

Fossils of gigantic ancient whales called Basilosaurus were first mistaken for dinasaur fossils but were later recognised as mammals. These prehistoric whales were more elongated than modern whales and had small back legs and front flippers. Their nostrils were situated halfway between the tip of the snout and the forehead and they had earbones just like those of modern whales. Basilosaurus shows the link or intermediate between whales and their terrestrial ungulate ancestors.

The theory is that some land-living ungulates favoured munching on plants at the water’s edge which had the added advantage of allowing them to easily hide from danger in shallow water. Over time their descendants spent more and more time in the water and their bodies became adapted for swimming. Their front legs became flippers and a thick layer of fat called blubber replaced their fur coats to keep them warm and streamlined. Eventually, their tails became bigger and stronger for powerful swimming and their back legs shrunk. Gradually, their nostrils moved to the top of their heads so that they could breathe easily without the need to tilt their heads while swimming. As some of these creatures began to feed on a different diet, they evolved into baleen filter feeders and lost their teeth. 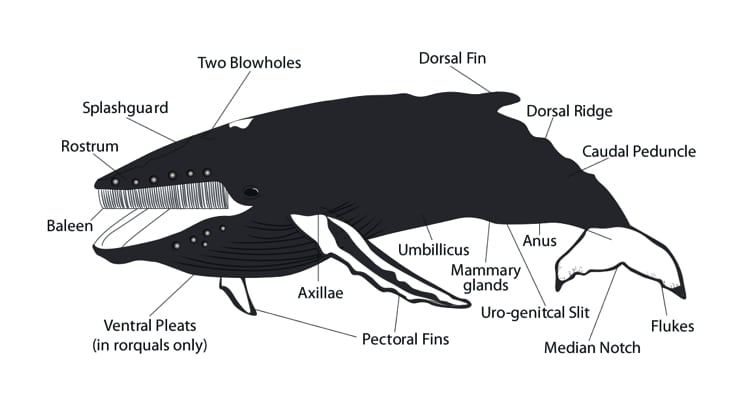