The International Whaling Commission (IWC) meeting is where governments come together to make decisions about whaling and whale conservation. Our team was at this year's convention to speak up for the whales.

Well, that was an eventful experience. The conference of the International Whaling Commission (IWC, the body that regulates whale hunts) in Slovenia at the end of last month was a highlight of my still-young career as a whale conservationist.

I was thrilled to be working alongside my experienced colleagues from WDC UK, Argentina and Germany (where I am based).  Before we even set off for the meeting, we’d put lot of work and effort into our preparations, because it is important to make good use of every opportunity to protect whales and dolphins.

We prepared a written opening statement and briefings which were published on the IWC website. Our briefings addressed the cruelty of Icelandic whaling, the important role of whales and dolphins in their marine environment, and their vital contribution to our fight against climate breakdown. 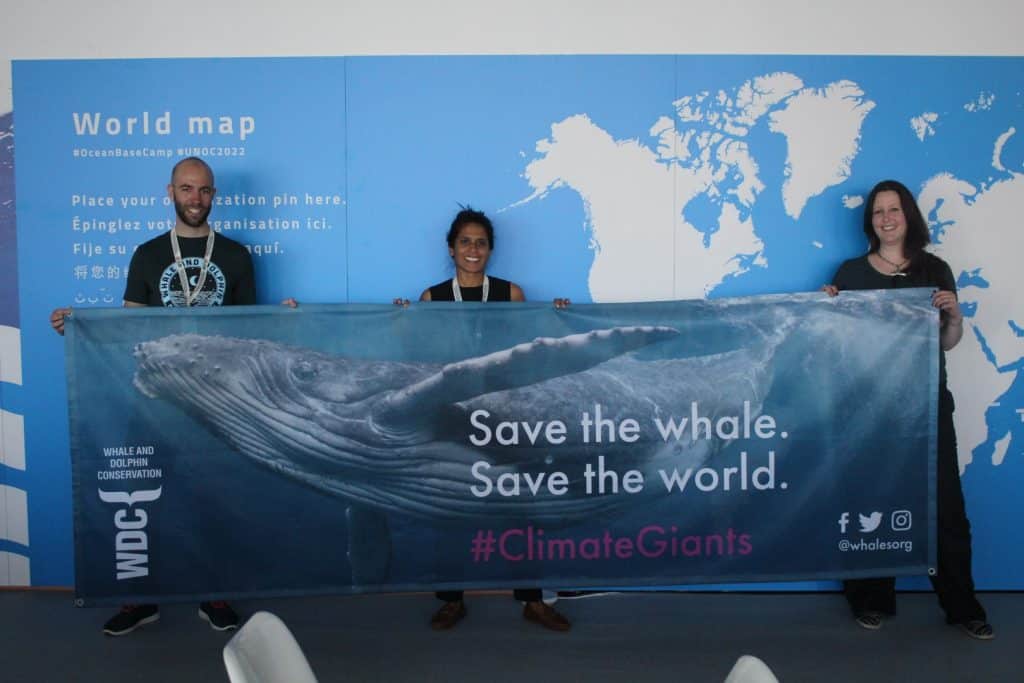 Your donation will help convince policymakers that we need to save the whale.

In the meeting rooms and corridors of the conference, we were busy exploring the topics of our briefings with other NGOs and raising awareness about the urgency of whale conservation worldwide. We discussed the proposed resolution on using whale meat to provide food security with government representatives and explained why the consumption of whale or dolphin meat cannot be the answer to world hunger.

We attentively followed the discussions of the Commission to capture important information and gauge the prevailing mood so that we could advocate for the protection of whales and dolphins in the right places. We have to be clever about this because as an NGO we’re not a member of the Commission, so as an official ‘observer’ we have limited opportunities to speak.

But we found and seized every opportunity to speak loud and clear on behalf of whales. 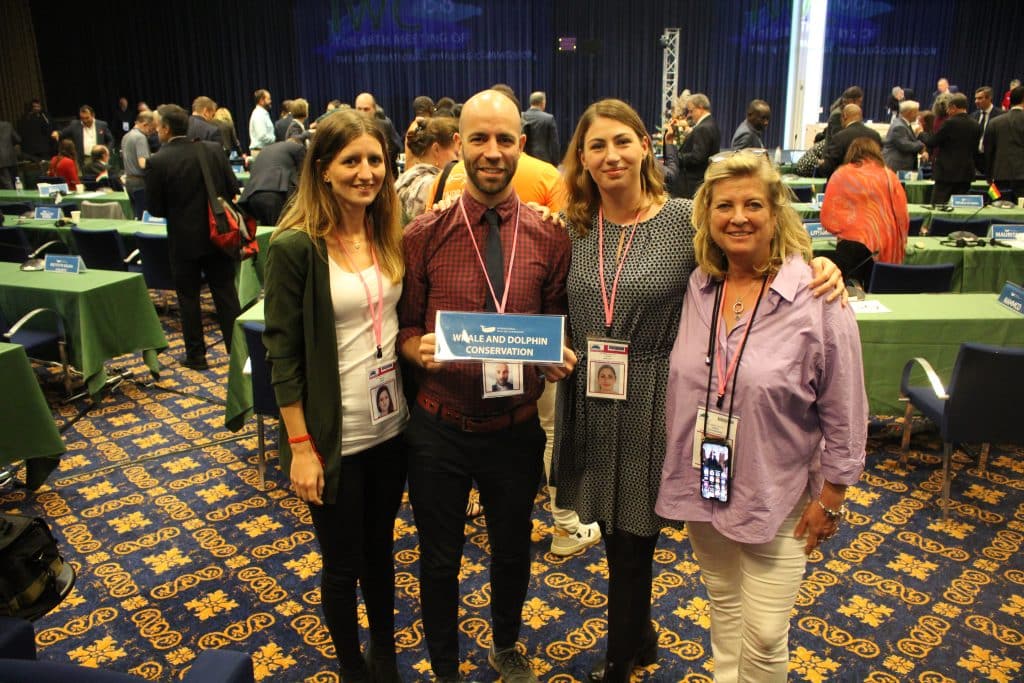 There were ups and downs: the planned whale sanctuary in the South Atlantic was within reach but was prevented by pro-whaling governments and this was a bitter disappointment. But we fended off the attacks on the whaling ban for the time being.

During the IWC meeting we met colleagues from other NGOs around the world. Organisations have different priorities but we share a common mission: the attack on the whaling moratorium (the ban on hunting whales for profit) by the pro-whaling nations had to be fought off at all costs.

There was plenty of exchange, which helped us all to get a good overview of where our arguments for the protection of whales and dolphins could have the greatest effect. Together we honed various interventions to be presented to government representatives at the plenary session.

And so it came, completely unexpectedly, my big moment. On behalf of WDC and 17 other NGOs, I was asked to present our intervention on Icelandic whaling. Our aim was to make the commissioners aware of the extremely high number of whales killed by Icelandic whalers, but also by Norway’s, and to highlight the numerous violations of animal welfare regulations. We finally called on the two countries to give up whaling once and for all. 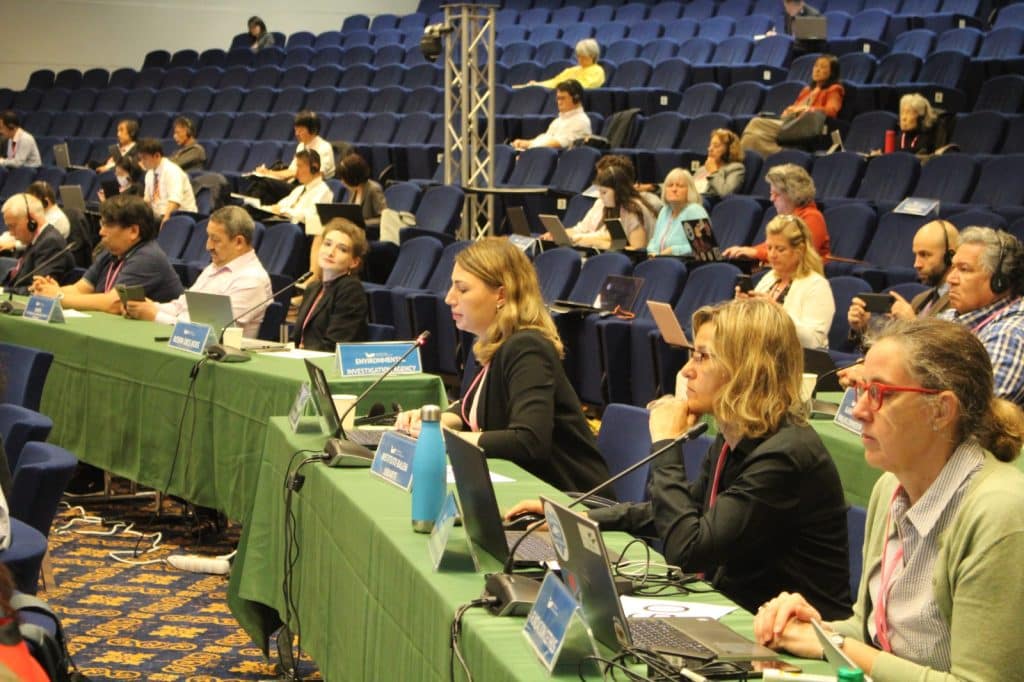 I'm in the centre of the picture, heart in my throat, speaking up for the whales I love

My WDC colleague Ed Goodall also delivered an intervention on behalf of us and many other NGOs, stressing the importance of whales for healthy ecosystems and as our allies in reducing the impacts of the climate crisis.

When I worked as an intern at WDC Germany earlier this year, being a situation like this was an unreal dream in the distant future. To be able to speak in front of world governments, determined to be heard and to give everything so that the unnecessary suffering of thousands of whales and dolphins finally comes to an end - pure adrenaline! I was terribly excited, my heart was beating up to my neck. But I was equally proud. Proud to represent you, WDC and the whales at this important conference and proud to have taken the plunge.

The days were long and usually the official sessions were followed by a meeting, a reception or some other event. But all the efforts were worth it, because there were plenty of opportunities for networking and exchange at these events. Valuable contacts were made to join forces in our efforts to protect whales and dolphins and tackle the climate and biodiversity crises.

I’m determined to stand up to the proponents of whaling at the next IWC in 2024.

Your gift, whether large or small, will help us stop whaling for good.