We know that whales, dolphins and porpoises are amazing beings with complex social and family lives, and we are leaning more about them all the time. But we are only beginning to understand that whales are essential in ensuring a healthy ocean and helping us combat climate change.

The ocean is our largest carbon sink, and it is the life within it that makes this possible. We are learning that whales and dolphins are fundamental to the ocean's ability to take carbon out of our atmosphere and lock it away. 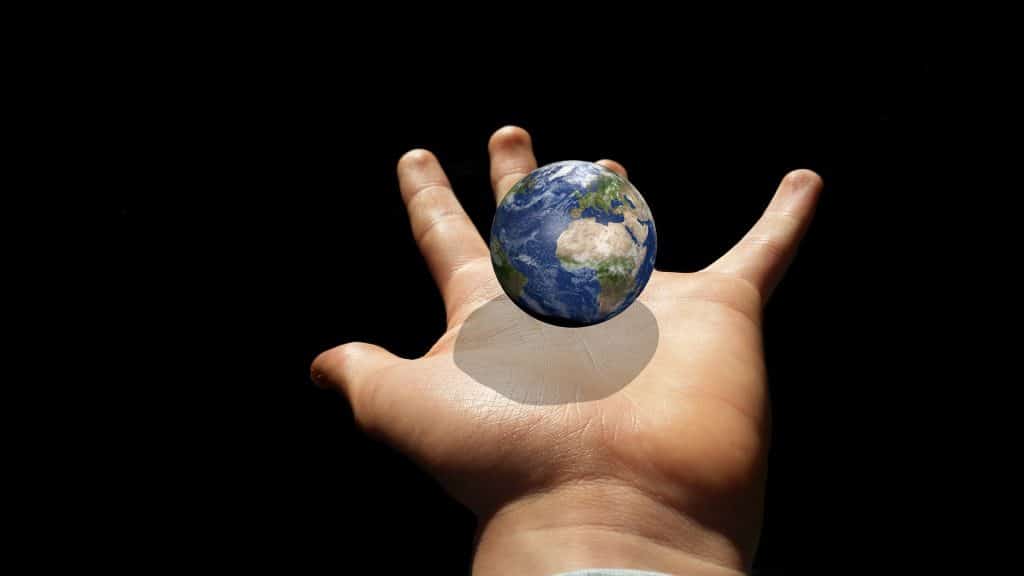 We are starting to understand that as whales go about their long lives, they circulate nutrients throughout the ocean. These nutrients are essential for the whole marine ecosystem, from the smallest animals, such as krill, to the largest, including the whales themselves, and also for phytoplankton growth. Phytoplankton are microscopic plant-like organisms that absorb carbon dioxide, capturing nearly a third of human-made carbon dioxide. They also provide oxygen which sustains most of the rest of the life in the ocean. Because of this, they are key to helping us combat both the climate and biodiversity crises.

So, how do whales circulate these nutrients? The research shows there are two main ways. The first is known as the 'whale pump'. As whales dive deep to feed and then return to the surface to breathe, they stir up the nutrients that other species need to survive and that would otherwise just sink to the seafloor and be unavailable. 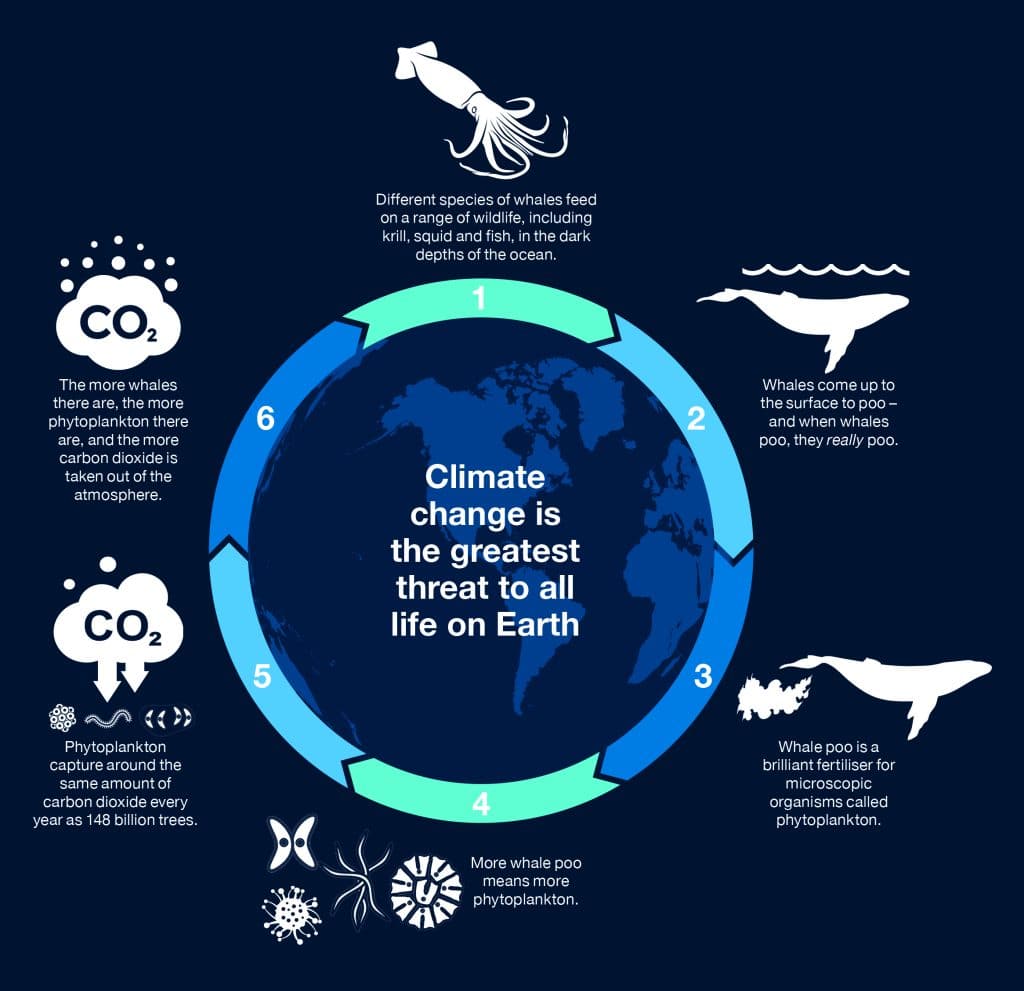 When at the surface, whales release huge amounts of poo, which is rich with nutrients, particularly iron. So, by moving up and down the water column and pooing at the surface, whales 'pump' vital nutrients around. Some species such as the sperm whale are really deep divers to depths of over 2,000 metres. A case study demonstrates how, through the whale pump, the population of sperm whales in the Southern Ocean stimulate phytoplankton growth to remove over 180 thousand tonnes of carbon from our atmosphere every year, the same amount of carbon removed each year by eight million trees. 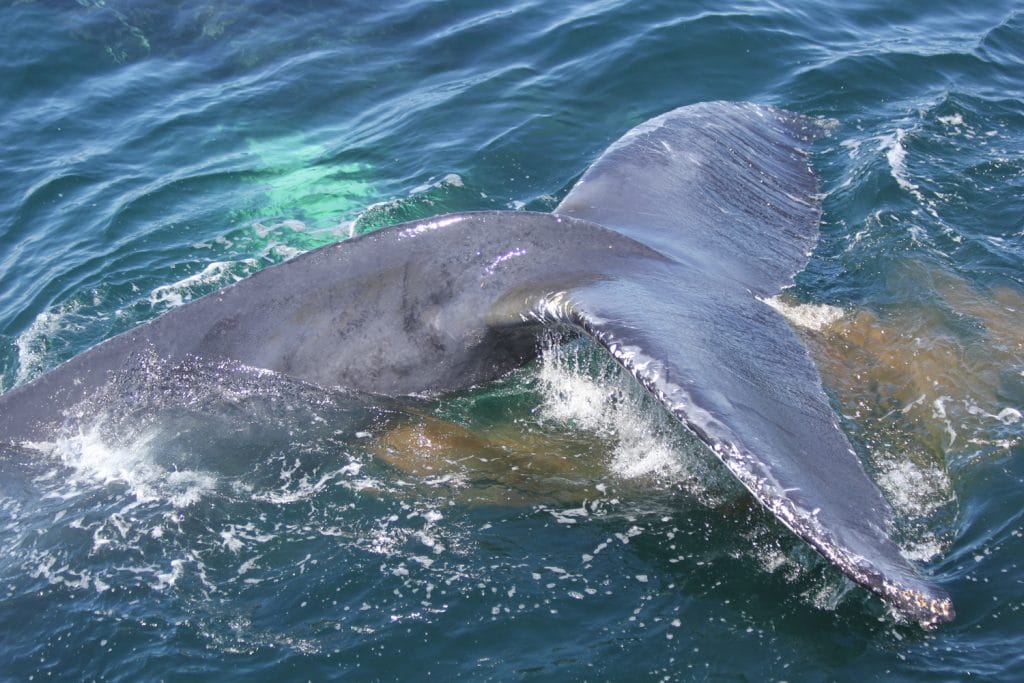 Whale poo is full of nutrients

The second way whales circulate these nutrients is across the ocean on their skin and in their urine, for example, as they undertake their long migrations. This is known as the 'great whale conveyor'. Studies on the migration of blue whales in the Southern Ocean show that these whales carry nutrients with them on their journeys which enable phytoplankton to flourish, which in turn lock away 24-thousand-trees-worth of carbon each year. It is estimated that if this population of blue whales recovered to pre-whaling numbers they could lock away 6.6 million trees worth of carbon. 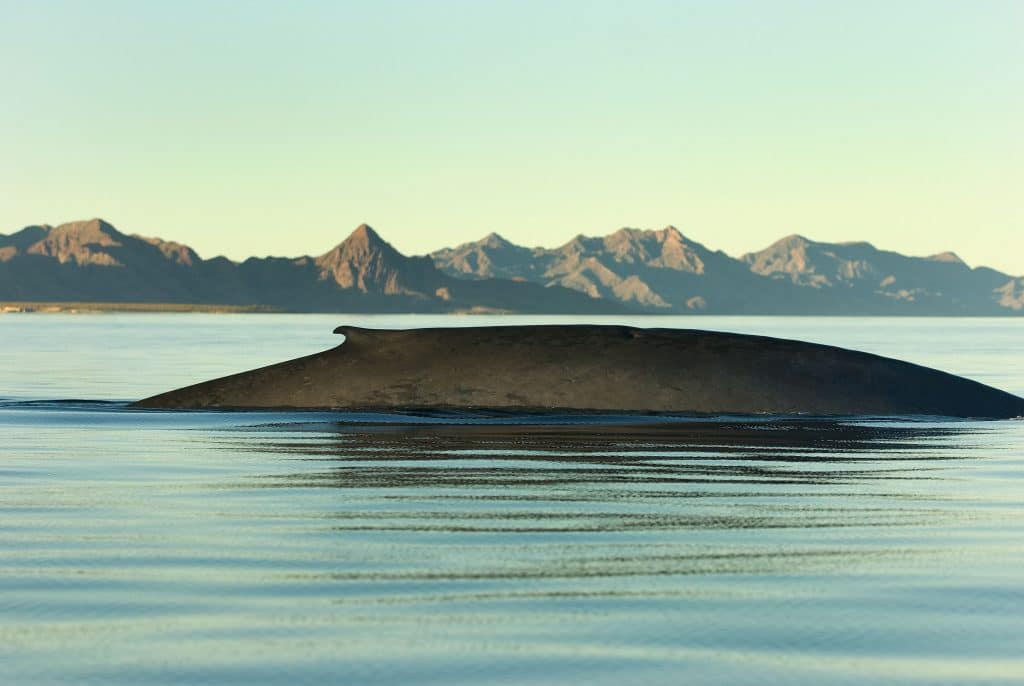 Blue whales carry nutrients with them on their long journeys ? Christopher Swann

Research shows that even when whales die they continue to be essential for ocean health and fighting climate breakdown. Their bodies fall to the sea floor and through these 'whale falls', the huge amounts of carbon in their bodies are locked away in deep ocean sediments for hundreds, potentially thousands, of years.

One case study in the in the Greater Farallones National Marine Sanctuary, off the coast of California, showed that whale falls account for roughly 60% of annual carbon sequestration (taking carbon out of the atmosphere and locking it away) - more than all the salt marsh, seagrass, and kelp combined in the sanctuary.

The whale falls also provide a unique habitat for deep sea species, many of which are only found on these sunken whale carcasses. Different species feed on the dead whale at it decays. Some species feed on the soft tissue and fat stores, others on the minerals in the bones. Up to 200 species can inhabit a single skeleton during the final stages of decay. 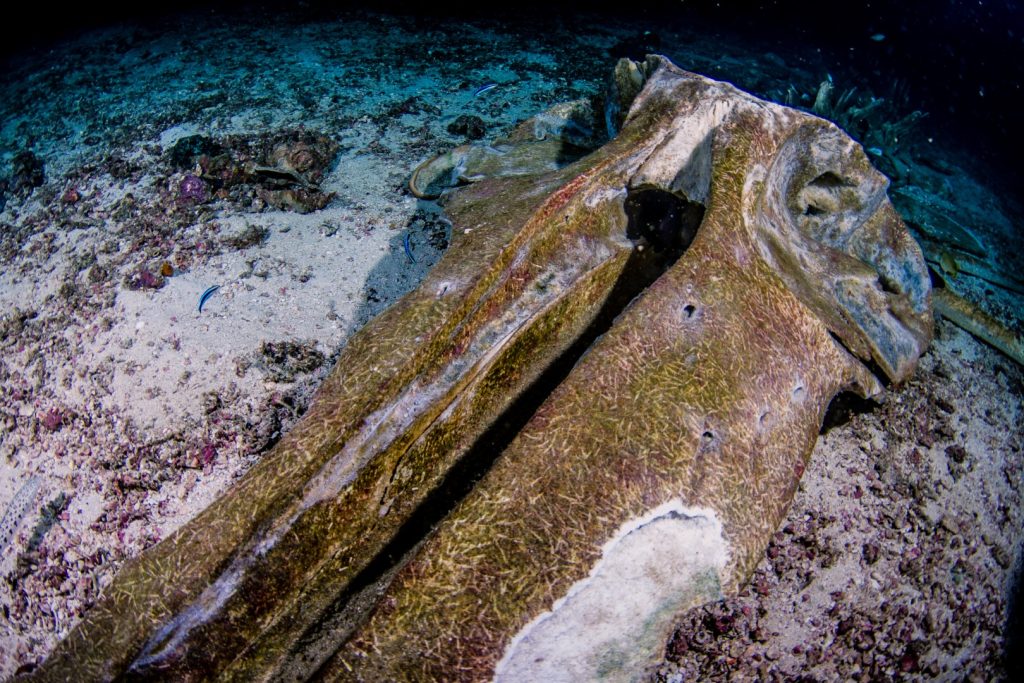 When whales die they help lock away huge amounts of carbon

It may sound strange, but recent studies are showing that dead whales are valuable for coastal ecosystems too. When whales wash up onshore the nutrients from their bodies enrich the soils and sediments where they lie, and their carcasses are essential to scavengers such as crabs, seabirds polar bears and even beetles. One study identified 57 different beetle species as specialists in eating meat and bones, and 12 of these were new species to the area.

But how do we know all this? I have been working closely with leading researchers who are studying these processes.  The research to date shows that whales and dolphins are having a positive impact on nutrient cycling, carbon storage and increasing the amount of life in the ocean. However, to influence policy that protects whales and dolphins on a much greater scale, we must fill the knowledge gaps and transform the data into something that policymakers can use.

This is why WDC are funding research projects to further understand and quantify these processes. Scientists are clearly demonstrating how important whales are for healthy marine ecosystems and our fight against climate change, which is why it is imperative we protect them from the threats they face, such as bycatch, pollution and whaling. If we allow whales and dolphins to recover to their pre-whaling populations, they could lock away more carbon in their carcasses than over half a million hectares of forest via 'whale falls' alone - that's a forest the size of half a million international rugby pitches!

We've always known that whales are amazing, and now we are gathering the scientific evidence we need to convince policymakers that we need to save the whale to save the world. Whales are key to securing a future for all of us and the beautiful blue planet we share - we need to protect them as if our lives depend on it … and they really do.