We are excited to announce backing for two ground-breaking research projects to assess the little understood impact whales have on marine productivity and carbon capture.

The projects, run by scientists from US and UK universities, will explore the extent to which whales transfer vital nutrients as they feed, defecate and migrate.  The Alaska Whale Pump project is studying the role of humpback whales off Southeast Alaska in stimulating phytoplankton growth as they move up and down the water column to feed and poo.  The ‘Great Whale Conveyor Belt’ study will look at the impact of some baleen whale species in transporting nutrients across the ocean as they migrate between their feeding and breeding grounds.

'This research could revolutionise how we think about whales, and their importance in the battle against climate breakdown,' says WDC’s Green Whale officer, Vicki James.  'By building a clearer picture of the role whales play in the marine ecosystem, we hope to grow support for whale protection as an important, nature-based climate solution, and unlock a major international programme of marine mammal research.  Knowing how important whales are as our climate allies gives us just one more reason to love and protect them.' 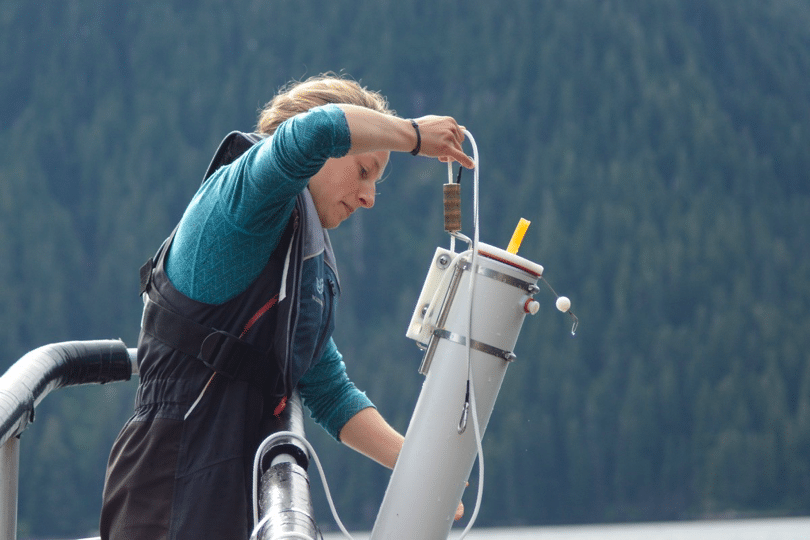 Over the last 18 months, thanks to the backing of partners including the Global Returns Project, and the Flotilla Foundation, WDC has put together a major international project that aims to plug the gaps in our knowledge of whales’ ecosystem services which can then be used to support conservation efforts.  The charity has convened two symposia with leading scientists in the field to identify priority research topics, and set up the Climate Giant Project in October 2021 with founding partners BRITA, Animal Friends Pet Insurance and Livework, to give businesses a model for investing in scientific research and conservation programmes.

Dr Joe Roman, Gund Fellow at University of Vermont, has been researching the role whales play in carbon capture and ecosystem services for more than a decade, and is leading the research testing the ‘great whale conveyor belt’ hypothesis.

'When we think of nutrients moving around the ocean we normally focus on the role of currents and tides,' says Dr Roman.  'What is less well understood is the impact that some of the largest creatures on the planet make as they undertake some of the longest migrations of any species. The idea that whales might be responsible for a vast oceanic conveyor belt of nutrients such as nitrogen and phosphorus has enormous implications for our understanding of marine ecosystems, and nature-based solutions to climate breakdown.'

Dr Heidi Pearson, Associate Professor of Marine Biology at University of Alaska, is leading the first empirical study of the ‘whale pump’ in the North Pacific.  Fieldwork beginning this month (May 2022) seeks to determine the extent to which migratory humpback whales circulate nutrients and carbon in Southeast Alaska and their impact on marine productivity and carbon sequestration.

'The whale pump hypothesis is intriguing, but quantifiable data on it is limited,' explains Dr Pearson. 'This project will empirically test the theory, by determining if and how humpback whales facilitate nutrient and carbon cycling, and ultimately, their impacts on marine productivity and carbon sequestration.'

WDC is putting almost US$100,000 into the two research projects. We are seeking further support for a multi-year programme of research initiatives to accelerate the science around whale-based climate solutions.

'It has been said that the industrial slaughter of nearly three million whales in the 20th century had the equivalent impact on the environment as the destruction of a rainforest the size of the Amazon,' adds Vicki James. 'While many whale populations are slowly recovering, they still face huge threats from shipping, fishing, hunting and pollution.  We believe this new research will accelerate efforts to support the recovery of whale populations, and protect whales, as one of our mightiest allies in the fight against climate breakdown.'

Watch our film and find out more about the Green Whale

DONATE NOW AND HELP US PROTECT WHALES AND DOLPHINS

3rd May 2022
Researchers in Bolivia recorded an unusual interaction between local rivers dolphins and an anaconda snake last year in the Tijamuchi river. The two species would...

28th April 2022
Analysis of satellite imagery suggests that Russia may be using military dolphins at its naval base at Sevastopol in the Black Sea. Sea pens used...
Load More