Anyone walking past my window might have heard my groan of disbelief at the news that, against all logic - rather like a bad Netflix series that has somehow been commissioned for a second season - the ‘minke whale trappers’ are back with their nets to have another go this summer!

Starting tomorrow and despite a chaotic and mercifully unproductive first season in 2021, this joint US/Norwegian research team is determined to try again to trap minke whales in huge nets off the Lofoten islands, northern Norway. They plan to forcibly test each whale’s hearing, via electrodes implanted under the whale's skin. This time, their research season extends from 18th May to 1st July, so is quite a bit longer than last year.

Please send a protest email or tweet. It's quick and easy to do.

The venture is fronted by Dorian Houser of the US-based National Marine Mammal Foundation and Petter Kvadsheim, chief scientist at the Norwegian Defence Research Establishment. The researchers claim that they just want to find out more about the hearing capacity of baleen whales and they’ve selected minkes - and young minkes at that - as the smallest and therefore easiest to handle of the baleen whales.

Who is funding this, and why Norway?

The first part is easy: these multi-million-dollar experiments are sponsored by the prestigious US Subcommittee on Ocean Science and Technology (SOST) and therefore financed directly by the US government, along with the Norwegian Defence agencies and the oil and gas industry. Given the powerful interests involved, it is far more likely that the funders want to find out just how much noise whales can tolerate - and at which frequencies - before they are actively harmed and inconveniently impede costly naval or oil and gas activities.

And it's really no surprise that the Americans, as lead funders, are happy to pour money into this project, yet operate far from the US in Norway. Researchers often operate in regions where animal welfare standards are laxer, allowing them to conduct research which likely would not have been permitted in their home waters - a process known as ‘offshoring’. The Norwegian government sanctions minke whaling, so clearly regards these small whales as expendable.

What is the plan?

The Norwegian government has granted permission to capture up to 12 juvenile minke whales each year until 2024 as they migrate through the region on their way north to their feeding grounds in the Barents Sea. The young whales will find their route blocked by nets around 1.7km long, strung across the strait at Vestfjord. If a whale swims into the netted area, the exit will be sealed and the trapped whale herded towards a circular fish farm enclosure. The nets will be drawn up under the whale, kind of like a drawstring bag, holding and restraining the whale at the surface. 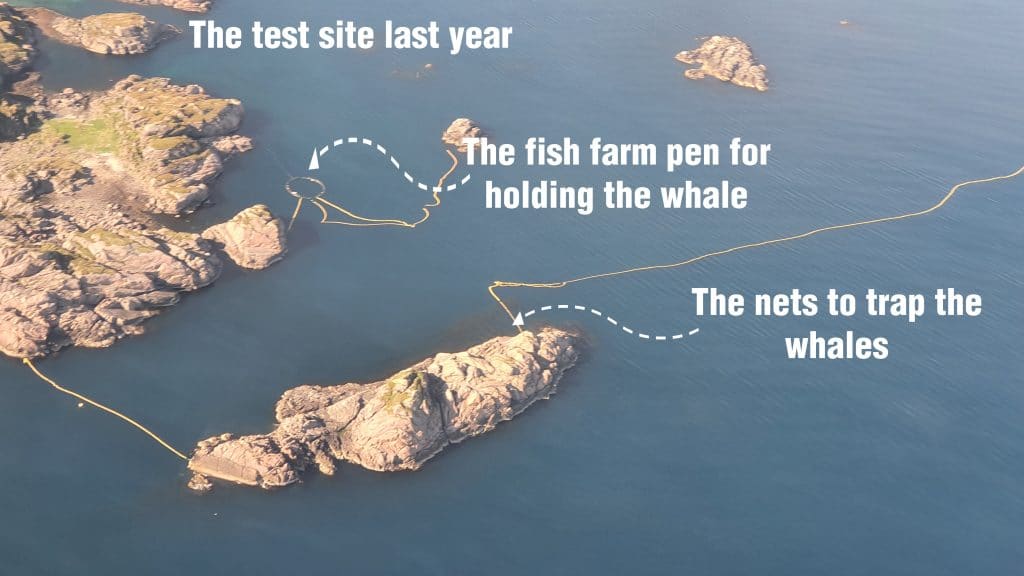 We captured this aerial photo of the site in 2021

Once cornered, the researchers want to implant electrodes beneath the whale’s skin and measure the whale’s brain waves to determine how they react to ocean noise. If the poor whale becomes stressed and panics, there is provision to sedate - a highly risky procedure very rarely carried out on baleen whales. After that, each whale will be satellite tagged and released, in an ordeal that is permitted to last as long as four days.

The stress could kill them

Shocking to think that the combined stress of capture, confinement, restraint and having electrodes inserted under their skin could trigger a condition known as ‘capture myopathy’, which can be fatal.

Will these tests yield any useful data?

I’m struggling to find anything positive to say. As I stated last season, this entire experiment is fraught with risk for the whales and, in these unnatural conditions, is highly unlikely to yield data that will change policy relating to the noise we pour into the ocean.

The fact is we already know a great deal about the way noise disturbs and harms whales and dolphins yet, disgracefully, data gathered from similar studies on dolphins and other whale species has spectacularly failed to translate into solid management measures. Surely this huge grant could have been better spent on practical solutions to reduce noise levels in the ocean? 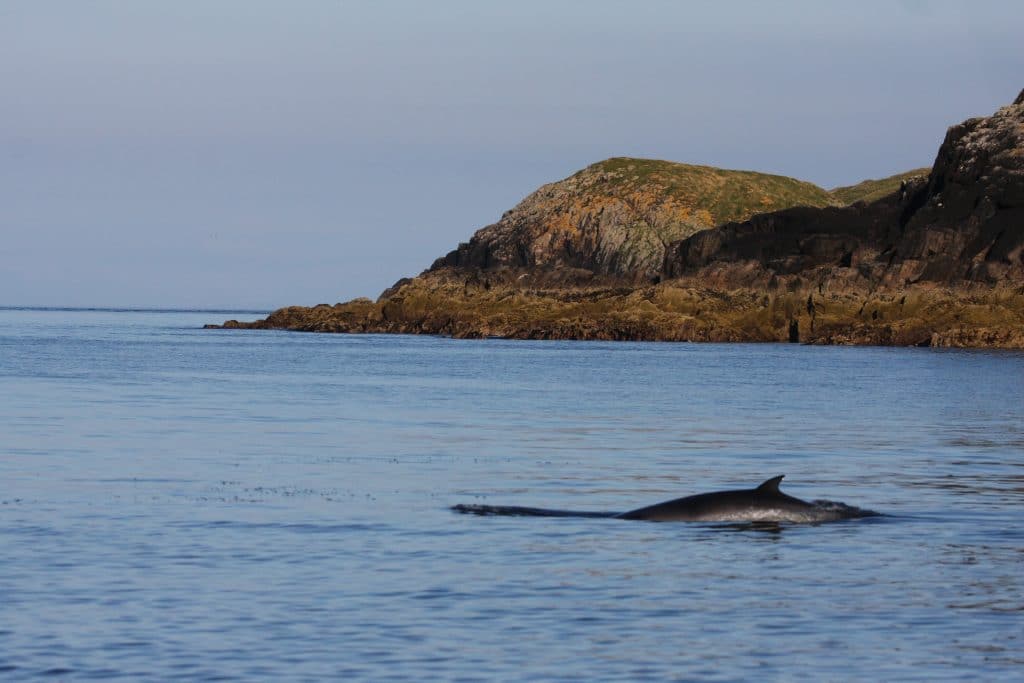 Fortunately, whilst the research team spent weeks setting out their nets, very little happened and most whales stayed clear of the danger zone.

However, on 16th June last year, a minke whale found his or her way into the outer enclosure. The researchers sealed the exit, but that little whale managed to escape that same night without trace. The researchers later alleged that the whale must have wriggled under the net but they have no idea of what happened next. Did this young whale survive or suffer any injury whilst struggling clear of the net? At the very least, he or she must surely have been frightened.

The researchers admitted that two further whales entered the outer enclosure: the first was an adult minke whale, basically too large to fit into the testing area and therefore released; the other whale was a humpback and so, in the words of the researchers, ‘allowed to swim on’!  But surely the very fact that a whale of another species was able to swim into the netted enclosure in the first place is a major concern, demonstrating that these huge nets are indiscriminate and have the potential to trap or even entangle other marine life in the vicinity?

Last year, working with our friends at NOAH, Norway’s leading animal rights organisation and the US-based Animal Welfare Institute, we kicked up a storm of opposition to these cruel experiments. We filed a complaint to the Norwegian government and mobilised over 50 of the world’s leading experts on whales and noise issues, as well as marine mammal vets, to sign our open letter to the Norwegian prime minister. We were quoted in global media and almost 100,000 of you signed our petition.

The researchers toughed it out and claimed that, whilst the project was ‘high risk’ and a ‘daring experiment’, it wasn't a failure. However, we did not let them off the hook and instead fired off a volley of probing questions, raising welfare concerns around that little minke who escaped and how they proposed to avoid similar events next season.

To date, we haven’t received any response. This is typical of the Norwegian government strategy which appears to ignore animal welfare concerns and hope that protesters just go away.

Well, they need to think again! This year, we plan to redouble our opposition, particularly in light of a recent confirmation from Petter Kvadsheim that 'if the [whale] shows signs of being stressed, we will cancel the experiment' and a video posted to the project site in which Dorian Houser, the other research lead admits that 'anyone who has worked with wild animals knows that when they are handled by humans, they will be stressed'. 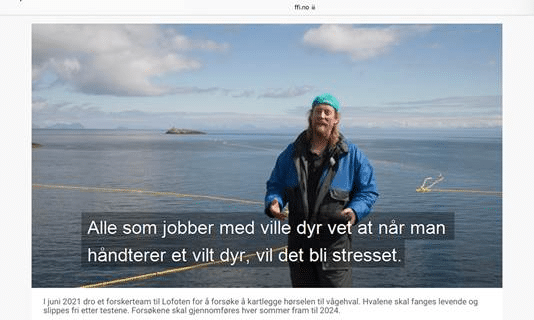 I can't provide details of this year's campaign just yet, as much of our work is necessarily behind the scenes, but you can be sure that we will once again be holding the researchers and their funders to account. We will update you as events happen, please be ready to support us!

We've made it quick and easy for you to take action