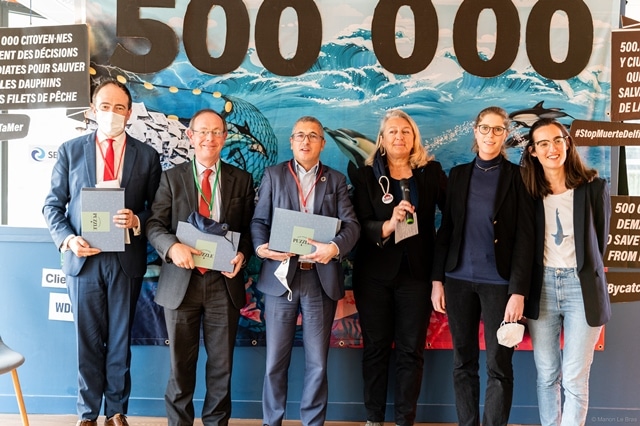 Over half a million citizens have signed a petition to demand action to stop thousands of dolphins dying in fishing nets (bycatch) in the Bay of Biscay.

The petition has been handed over to European Commission Deputy Director General of DG Environment, Patrick Child, the French Director of Maritime Fisheries and Aquaculture Eric Banel, and the Spanish Secretary of State for Environment, Hugo Morán.
The hand-over takes place amid the peak bycatch season for dolphins, from December to March each year.

On behalf of the citizens, environmental groups including WDC have urged the French and Spanish governments to urgently adopt adequate measures to prevent the unnecessary deaths of these dolphins every winter, as they are legally required to do under EU environmental law.

The three representatives also received shared jigsaw puzzles, symbolising the need for cooperation to save our dolphins. The presence of a French representative was particularly important,  given that the French fleet is responsible for most of the fatal dolphin catches and that France is currently hosting the One Ocean Summit, presenting itself as a leader in ocean protection and sustainable fishing.

Together with environmental NGOs,  Seas At Risk, Blue Planet Society, France Nature Environnement, Ecologistas en Acción, and ClientEarth, we are urging the French and Spanish governments to adopt effective measures, in line with the scientific advice. Action must therefore include temporary closure of the fisheries responsible for dolphin catch during the peak bycatch period.