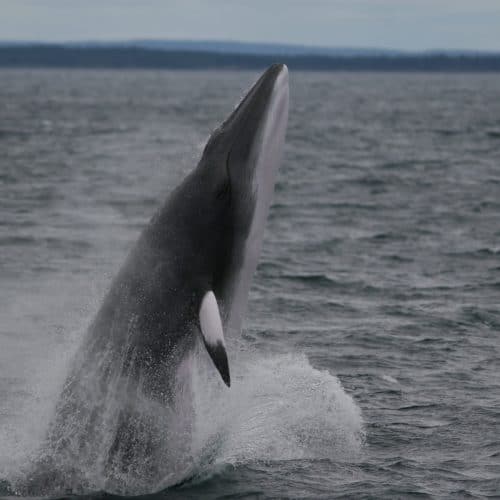 50 of the world's leading whale and dolphin scientists have signed a letter from WDC urging the Norwegian government to stop potentially cruel and dangerous experiments on wild minke whales going ahead.

Approval for the research was made by the Norwegian Food Safety Authority (Mattilsynet). The whales will be captured off Vestvågøy in the Lofoten area of northern Norway to study how their brains respond to ocean noise.

According to a permit issued by Mattilsynet, the project is taking place from 15th May to 22nd June and restart in 2022.  A mile-wide net will be used to herd migrating juvenile minke whales into an enclosure, before they are cornered inside a small, modified aquaculture cage.  Once the whales are trapped, the researchers will try to measure their brain waves to determine how they might react to naval sonar and noise from oil and gas exploration.  As many as 12 whales could be held captive for as long as four days before being released.

WDC has teamed up with the Animal Welfare Institute and NOAH (Norway's largest NGO for animals) to oppose the plans.

'This research project is alarming for several reasons,' said Dr. Siri Martinsen, veterinarian with NOAH. 'We are very concerned for the welfare of the involved whales, as these circumstances are very likely to cause them stress and may even impact their health. There is a significant risk that the whales will panic once they are trapped, causing them to thrash or flail about, which could lead to serious injuries as they attempt to flee.'

The researchers have proposed using sedation to calm whales who display signs of stress and will even go as far as stunning them in emergency situations. Vanesa Tossenberger, policy director with WDC, Whale and Dolphin Conservation, cautioned that 'little is known about sedating or stunning wild whales and dolphins, and it is therefore rarely attempted. Available data indicate that sedation of baleen whales in the wild could be life-threatening.'

'If a minke whale, even a juvenile, were to respond with great force, it also could be extremely dangerous for the human researchers,' added Susan Millward, director of AWI’s marine programme.  'Since whale reactions can be unpredictable, we believe that these researchers — particularly those in the water — will be at risk of serious injury. It is simply not worth taking a chance, particularly when existing research already tells us how baleen whales are affected by ocean noise.'

We are also concerned about the potential impacts to other species, including marine mammals and seabirds that could become entangled in the various nets used to cordon off the research area.

Read the statement of concern from the scientific community.

Ask the Norwegian Prime Minister to stop these experiments. We need you to sign as soon as possible as the whales could be captured any day now.

Your donation will help us oppose these horrendous experiments and fight Norwegian whaling.