Reports in Japan suggest the whaling industry there is facing increasing challenges just a few years after the country withdrew from the International Whaling Commission (IWC – the global body that regulates whaling) and resumed hunting whales for commercial profit.

Previously, Japan had slaughtered whales under the guise of ‘research’, even though next to nothing was learnt from the hunts and most of the meat ended up on sale to the public. 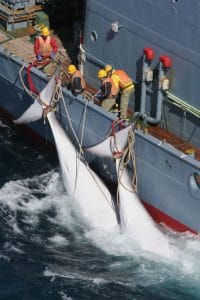 The lower quotas (numbers of whale kills Japan sets itself) mean that production of whale meat has nearly halved, supply of slaughtered whales has decreased and the government is set to make huge cuts in the funding that props up the industry and helps it survive. Some of the money handed over by the Japanese government may be turned into loans to the whaling companies. One of the main reasons behind government cuts  (the national whaling-related budget was 5.1 billion yen in 2020) is because the demand for meat from the Japanese public is very low and falling. The number of generations of Japanese people who have never eaten the meat is increasing.

Nevertheless, moves to make the commercial whaling industry self-sufficient continue. The president of the largest company handling offshore whaling and whale meat sales in Japan, Kyodo Senpaku, has stated that the company aims to stand on its own two feet financially by, amongst other things, carefully selecting and killing whales that that are fatty and have high commercial value, speeding up production processes and trying to market this meat as some sort of equivalent to fine French cuisine through the creation of new dishes, such as whale meat tartare and whale oil milk gelato – all desperate attempts to make whale meat appealing.  However, the hunting fleet’s mother ship ‘Nisshin Maru’ has deteriorated badly and needs replacing, but with what depends on a range of increasingly tough economic factors.