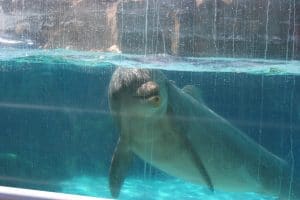 A review of the data behind Dolphin Assisted Therapy (DAT)  - the use of dolphins to treat people with mental and physical health concerns, has concluded that there is still no concrete evidence proving that it works.

Dolphin Assisted Therapy (DAT) encourages people suffering from a range of medical problems to enter the water with dolphins or whales (often held captive) and swim with them as a way of improving their health.

WDC has always questioned DAT being used as a treatment and in a summary of her latest review findings, Dr Lori Marino backs up our view that it has no healing powers and that there is no evidence of any long-term benefit for those who have undergone a session or programme. Many facilities charge fees offering this treatment method for people with autism and depression. Some even claim that it cures skin conditions.

Captive dolphins used in DAT may have come from other captive facilities or been taken from the wild from their families. In captivity, dolphins cannot escape from human swimmers when they do not want to interact with them. Interactions with swimmers can lead to heightened stress and anxiety, which is often managed through medication in captivity.

Previous studies have concluded that people undertaking a DAT programme may gain little more than they would have from an animal therapy programme with a domestic puppy. Furthermore, research into swimming with dolphins programmes demonstrated that some participants hesitated to interact with captive dolphins because they felt scared, and that many people reported feeling disappointed after a dolphin encounter.

One of the pioneers of DAT, Betsy Smith, has since denounced it publicly, stating that ‘it is a rather cynical and deceptive practice by dolphinarium and swim-with-programme owners. Some certified therapists with no dolphin knowledge will charge exorbitant fees for treatment that can be done without dolphins… at the heart of all these therapy programs is the exploitation of vulnerable people and vulnerable dolphins’.

Find out more about swimming with dolphins and why it isn’t a good idea.