Whale culture and conservation: to infinity and beyond …

By Nicola Hodgins | 13th April 2021
Back in November, I shared my heartache at the drama unfolding in the waters off...

By Julia Pix | 16th March 2021
Whales and dolphins have big brains, and large brained beings have a few things in...

Growing up with the amazing Adelaide Port River dolphins

By Alison Wood | 9th March 2021
Squeak, one of the Port River dolphins If you are able to make a donation,...

By Julia Pix | 16th February 2021
Friends and family all get involved in bringing up the younger generation of whales and...

Joy and sadness watching Hector’s dolphins in their wild place

By Julia Pix | 2nd February 2021
The widening estuary is deserted...  it was not always like this - a rusting trypot...

By Vanesa Tossenberger | 26th January 2021
Lockdown in Argentina has been long and tough and so I was excited when restrictions...
Load More

On 20 November 1820, a sperm whale turned on a whaling ship in the Pacific and sank her. Two hundred years on, in her guest blog, freelance journalist and long-time WDC supporter Stephanie Boxall reflects on what we can learn from the incident that inspired Herman Melville to write Moby-Dick.

Two hundred years ago, an 80-ton sperm whale smashed head-first into a Nantucket whaler – and returned to do it again, breaking her up and sinking her. The first mate Owen Chase later wrote that the whale appeared ‘with a ten-fold fury and vengeance in his aspect… I could distinctly see him smite his jaws together as if distracted with rage and fury’. The story passed into legend and is believed to have inspired Herman Melville to write Moby-Dick.

The real-life story, immortalised in Chase’s own account and later in Nathaniel Philbrick’s In the Heart of the Sea, which was made into a Hollywood film, has all the elements of a cracking yarn: humans against nature, the open ocean, adventure, danger, suspense, a dramatic climax – and cannibalism into the bargain. But both the original tale and Melville’s novel carry a serious message about our attitude to the planet we live on and the other living beings we share it with.

Please donate to help us consign whaling to history

In his book Leviathan, or The Whale, author Philip Hoare describes 19th-century whaling as ‘a pattern of plunder of the New World’s resources. As their land-borne counterparts drove buffalo from 60 million to extinction, so these oceanic cowboys pursued whales to the brink. It was as if the antediluvian beasts had to die in order to assert the modern world. For America, the common enemy was the wilderness; and just as that wilderness was in fact full of animals – and native peoples – so the American seas were full of whales, ready for the slaughter’.

By the end of the 19th century, the whaling industry in the US had begun to decline and eventually global regulations were brought in, leading to the International Whaling Commission’s ban on commercial whaling in 1986. Even so, some countries, such as Japan, Iceland and Norway, continue to practise whaling, killing several hundred large whales every year. Worldwide, around three million have been killed in the 20th century alone.

Whaling is not the only area where our relentless pursuit of the Earth’s resources continues: oil drilling, mineral mining, hunting, overfishing, deforestation, and so on, not to mention the destruction of wildlife habitats for building, transport and industrial-scale farming. And the consequences are unfolding around us all the time: global heating, melting ice caps, extreme weather events, forest fires, flooding, coastal erosion, displacement of communities, extinction events and – perhaps particularly pertinent as we live through the coronavirus pandemic – viruses crossing the species barrier as a result of our interference with nature. 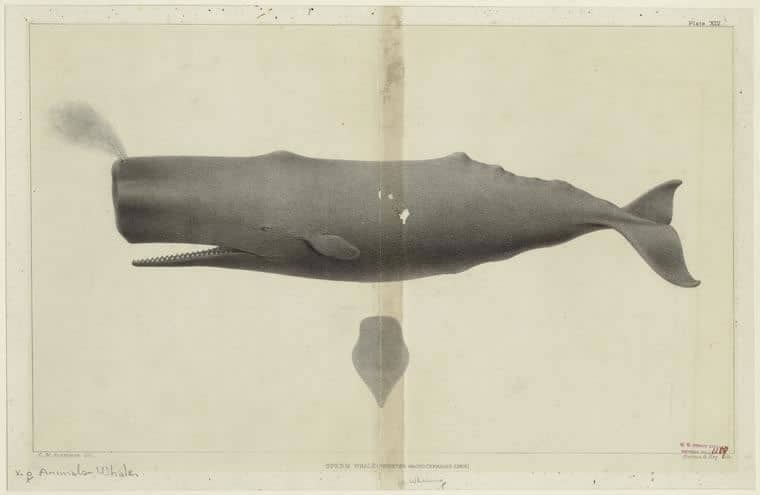 The sinking of the Essex was the first known incident of a whale ‘turning on’ a whaling ship, but it has not been the only one. And as recently as this summer and autumn there have been reports of orcas ramming sailing boats off the coasts of Spain and Portugal. But what is strange about all of these is the fact that whales are highly intelligent, social and gentle creatures and, despite centuries of being hunted – in the case of some species almost to extinction – they are not generally known to turn on their pursuers.

Could the whale who sank the Essex have done it deliberately? We will never know, but Erich Hoyt, conservationist and Whale and Dolphin Conservation’s own research fellow has his doubts: ‘Sperm whales are rather shy and very family-oriented, with a distinct lack of aggressive behaviour toward humans,’ he says. ‘I think the most likely explanation for the sinking of the Essex and other whaling ships is a whale being hauled in after having been harpooned and accidentally thumping the ship.

‘Considering the numbers of sperm whales killed in the 19th and 20th centuries, it’s not surprising that there are cases of ships being sunk… The best explanation doesn’t make a good Hollywood movie, but with more than a million sperm whales having been hunted and killed, it’s remarkable that there have been so few accidents involving whalers and boats, and there is no solid evidence of any of them ever being an attack.’ 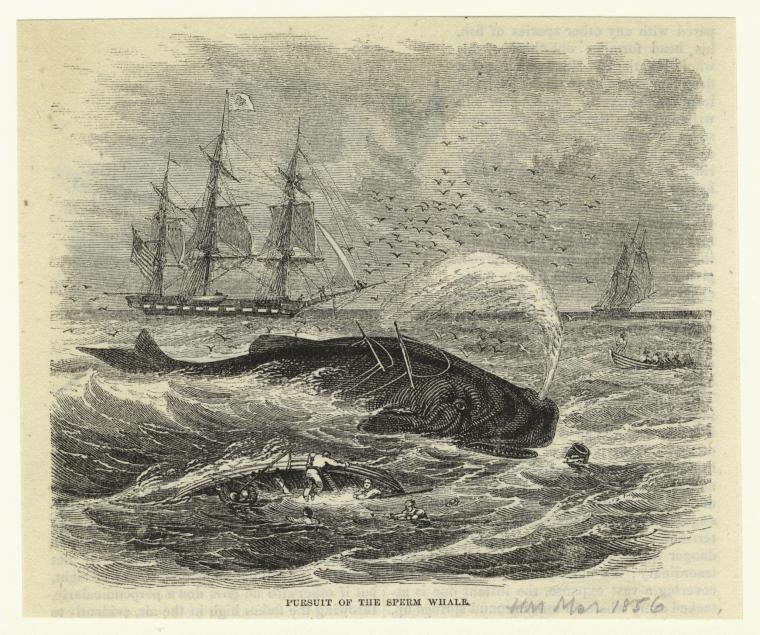 The consequences for the survivors of the Essex wreck were dire. Driven to extremes, some resorted to killing and eating each other and, in the case of Owen Chase, losing his mind. The idea of a whale turning on his pursuers in revenge may be fanciful, but as we approach the 200th anniversary of that event, what can we learn from it, and the novel it inspired, about our relationship with nature?

Dr Edward Sugden, lecturer in American Literature at King’s College London, thinks that some people, at least, have learned from Moby-Dick: ‘As early as the 1920s and 1930s, environmentalists concerned with the ethics of hunting the whale used the novel as an example of humankind’s degradation of the natural world,’ he says. ‘And part of the reason the sinking of the Essex caused such a shock was that it gave a lie to the idea that nature was somehow pliant and designed for the satisfaction of human needs.

‘In Chapter 105, ‘Does the Whale’s Magnitude Diminish? – Will He Perish?’, Melville concluded that there was no way human activity could lead to the extinction of the whale… So I suspect that the notion that humans could actively alter the world in such a way as to pose an existential threat to all life would be foreign to him. But he would have been keenly aware of the conflict between humans and the natural world that underlies the contemporary environmental catastrophe.’

In Moby-Dick, Ishmael lives to fight another day. And, in the real world, too, there are signs of hope. For decades, individuals and organisations have worked tirelessly to protect nature and make the world a better place. Charismatic figures such as David Attenborough and Greta Thunberg have inspired new generations to take up the cause. We have seen the rise of Extinction Rebellion and the flourishing of the rewilding movement. Nations across the globe have united in their efforts to implement the Kyoto Protocol and the Paris Agreement. And, with President Elect Biden preparing to take his place in the White House, the US is once more a serious environmental player on the world stage.

But are all these things enough to save us? Time is ticking. Just how long can we go on treating nature as though it’s simply there for our benefit before our plundering of the Earth’s resources and our gradual destruction of the global ecosystem eventually make it impossible for us to live here?

If you are able to help, every gift, whether large or small, will help us stop whaling for good.