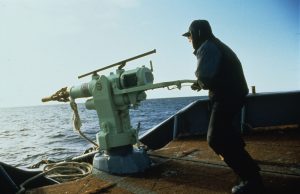 The first Japanese vessel to carry out whale research in the Antarctic Ocean since the country officially withdrew last year from the International Whaling Commission (IWC – the body that regulates whaling) has returned to port without catching a whale.

On 26 December 2018, the Japanese government announced its withdrawal from the IWC in order to officially resume commercial whaling operations in Japanese waters because commercial whaling is banned. Previously the Japanese whalers had worked around the IWC’s ban by conducting so-called ‘research whaling’ operations in the high seas of Antarctica and the North Pacific. However, large numbers of whale were killed whilst little significant research was undertaken, and most of the meat returned to port ended up for commercial sale.

The ship from Japan's Institute of Cetacean Research returned to Shiogama Port in Miyagi Prefecture this week after almost one-month in the Antarctic Ocean. Researchers say they monitored the number and types of whales, collected skin samples and examined DNA.