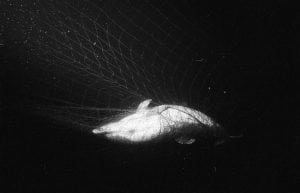 A new report has revealed the shocking figures behind dolphin deaths in fishing nets in the Indian Ocean, suggesting that populations may have dropped by over 80% in recent decades.

The study, led by Dr Charles Anderson of the Manta Marine organisation and published in the journal Endangered Species Research, paints a catastrophic picture, revealing that up to 80,000 whales and dolphins (mainly dolphins) could be trapped and dying in gill nets in the region each year.

Fishermen use gill nets to catch tuna for the commercial market. These nets hang like a curtain wall in the water catching fish but also other, non- target species including dolphins and whales.

Like us, whales and dolphins breathe air, so when they get tangled up in a net, rope or fishing line it is a race against time to reach the surface. In their desperation to escape and avoid suffocation, some tear muscles, break teeth, and sheer off fins. The more they struggle, the more entangled they can become.