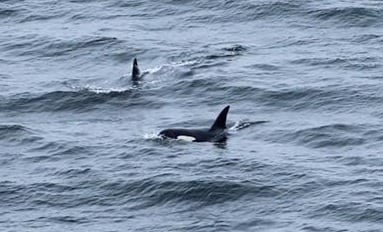 A male orca, commonly known as Riptide, has been spotted in waters around Beirut, Lebanon, on February 19th and 20th after completing what is thought to be a record breaking journey.

Riptide belongs to an Icelandic pod of orcas that has notably been travelling unprecedented distances over the past year. It is believed his journey began off the coast of the Snæfellsnes peninsula in West Iceland, where he was last seen in June 2018. He was later spotted with his pod in December 2019 around Genoa, Italy,before moving onto Lebanon.

Orca Guardians, a non-profit dedicated to the protection of orcas in Iceland, report that there are 29 known orcas that migrate between Scotland and Iceland, but this is the first time in recorded history that an orca has travelled this particular route – Iceland to Italy to Lebanon. In fact, this journey of just over 8,000km (4,970 miles) is the longest known one-way distance travelled by any orca to-date.

Whilst this marathon swim is remarkable and exhibits fascinating orca behaviour, it is unusual to see orcas in Mediterranean waters.

There have also been some concerns for Riptide’s health; it’s been reported that he appears emaciated and is travelling without his pod, which had been with him on his journey through Iceland and Italy.

WDC works to protect orcas, and their homes, across the globe. From ending captivity to dam removal efforts in the Pacific Northwest, we will not stop until all orcas, whales, and dolphins are safe and free. Learn more.