But until this future, is there any level of bycatch that is ok? 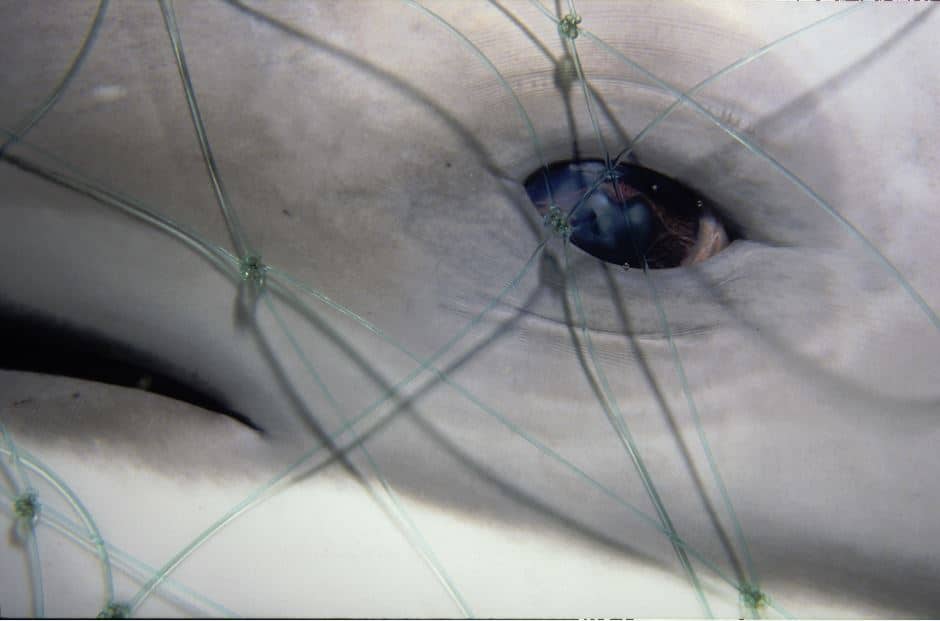 We tend to trust the term ‘sustainable fisheries’. It implies that the fish population being targeted is not threatened. But what does it tell us about whale or dolphin deaths?

Today, it is estimated that hundreds of thousands of dolphins, porpoises and whales die in fishing gear each year. This is unacceptable. Fishing should be conducted in such a way that the risk of a whale or dolphin becoming entangled is so low that it’s no more than a very occasional tragic accident.

Why we should care about every whale or dolphin who dies

Dolphins, porpoises and whales are smart, sociable, sentient and family-orientated beings. Death in fishing gear is a frightening and horrible way to die. It can be painful and slow resulting from injuries sustained while trying to escape or starvation. Even when death comes more quickly, through asphyxiation, there is no control over the time taken to die. The individual suffers, and for longer than allowed for farm animals in an abattoir. 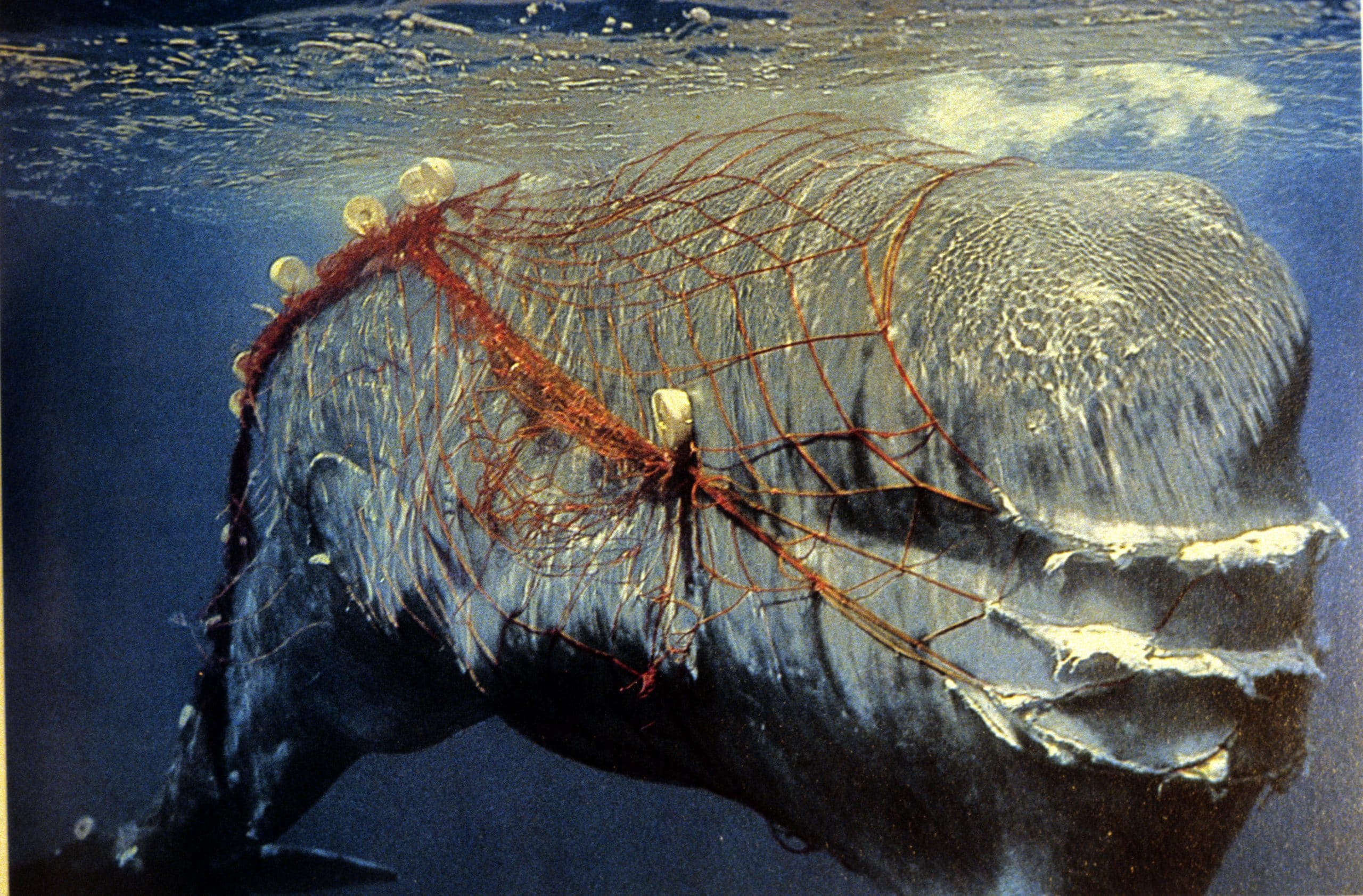 A whale can carry fishing gear for a long time

When a dolphin, porpoise or whale becomes entangled in fishing gear, it can also impact their dependants and other members of their family or group. As we learn more about the cultures and societies of whales and dolphins, we are beginning to understand that evaluating bycatch cannot rely on numbers alone.

A population could seem healthy when you look at how many individuals there are. If more are being born than are dying in fishing gear, then that might appear to be sustainable. But it completely fails to take into account the roles of individuals within groups and populations. What if the whale who dies after being wrapped in fishing rope for months is the matriarch who holds all the knowledge about the best places to find food? Or if the dolphin who dies in the trawl net is a mother whose young calf is left behind?

Bycatch is a waste of life. Consumers want to know that the food they eat did not involve suffering. Fishers don’t want to catch dolphins and responsible fishing should include a duty of care to prevent it.

With new technology such as electronic monitoring, improved transparency is increasingly expected in fisheries and the true extent and suffering experienced as a result of bycatch will become much more apparent. These changes will also benefit those working in the fishing industry through improved safety conditions.

Alternative fishing gear can be a solution – for example, switching from nets to pots can reduce bycatch significantly in some regions, like the Baltic where porpoises are critically endangered- and there are ways to make existing gear safer for ‘non-target’ species. Smart management can also keep fishing vessels away from important habitats and enable them to avoid other areas during sensitive periods, such as calving.

Achieving ‘sustainability’ is not an acceptable end-point

In 1994, the US government developed a mathematical formula to calculate the impact of bycatch on whales and dolphins. In an attempt to prioritise which fisheries needed to change their practices immediately, the formula created a value which was set as a threshold for fisheries managers.  If the number of whales or dolphins dying in fishing gear exceeded this threshold, managers needed to take action on that fishery immediately by developing a plan to reduce bycatch. The plan was meant to reduce whale and dolphin (and other marine mammal) deaths to nearly zero within five years.

In theory, this approach seemed to be a reasonable starting point and has become commonplace as a way to determine when bycatch is assumed to be ‘unsustainable’. However, the quality of data globally varies and the number of individuals that can die before a population is at risk of going into decline is now calculated using various statistical methods, depending on the level of data available.

While the original intent of the threshold was to help managers prioritise which fisheries needed to change most urgently, some countries use this threshold as a means to define ‘sustainability’. In a small population, like the Māui dolphins in New Zealand, where fewer than 60 remain, every single dolphin death in fishing gear threatens the future of this population. Where a species is still relatively abundant, such as the Northeast Atlantic common dolphins, it’s possible that many hundreds could be killed without causing the total population to decline. However, in both examples, the current level of bycatch is not believed to be ‘sustainable’. Ironically around the world, some of the most worrying cases are where bycatch appears to be declining. This is often an indication that there are not many individuals left to get caught. Furthermore, concerns have been raised in some scientific forums that often what has historically been considered as a ‘sustainable’ figure is actually too high and populations would be impacted at much lower levels. 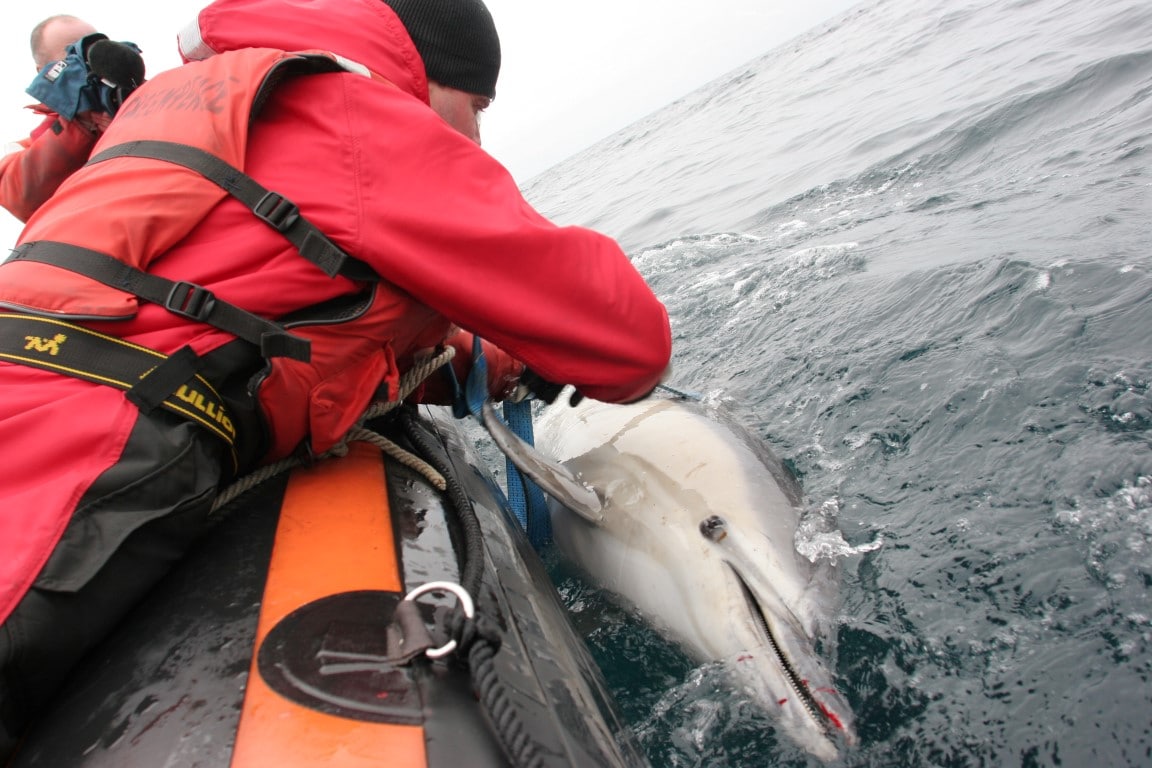 Bycaught dolphin being recovered from the water.

Dolphins and whales are long-lived beings. How well populations are doing is not well understood. As data on fisheries bycatch are largely non-existent in most of the world, the true level of bycatch is unknown and so governments make decisions with a high level of uncertainty. Uncertainty often leads to a lack of action. Inaction is a decision too though, and we should not accept it. Actions to address bycatch before populations become depleted are much more effective and less onerous on the fishing industry than drastic measures to save populations that have become endangered.

You may remember that between the 1960s and 1980s, more than six million dolphins were killed in the Eastern Tropical Pacific tuna purse-seine fishery and populations of northeastern offshore Pantropical spotted and eastern spinner dolphins reduced by an estimated 40% and 20%, respectively. Despite measures being introduced that reduced dolphin deaths in this tuna fishery to fewer than 1,000 per year, the populations are still not showing signs of recovery, and the birth rate has been declining since the 1980s.

For all these reasons, we often don’t really know what ‘sustainable’ is but we do know that bycatch levels cannot and should not be maintained, or accepted.

Can I be confident if I buy eco-friendly, certified seafood?

Certification labels, like Marine Stewardship Council (MSC) and the MSC ‘blue tick’, do not ensure that sufficient or any measures are in place to prevent, reduce or monitor dolphin bycatch. You cannot be reassured when you buy seafood products with a certification label that dolphins, porpoises or whales have not suffered and died.

You can’t even be certain that the bycatch is ‘sustainable’, and so is not having a population-level effect, in seafood carrying a certification label, which is quite frankly unacceptable. Specifically, a recent review of bycatch in MSC fisheries found insufficient management, poor data collection and sustained or increasing bycatch of marine mammals, seabirds and sharks.

The term ‘dolphin friendly’ or ‘dolphin safe’ on seafood labels comes from various schemes that do not provide a guarantee that no dolphins have been caught in the fisheries from which the seafood was sourced.

We don’t think most people accept that it’s ok for dolphins to die for the fish on their plates. If it was widely known that certification labels don’t adequately consider dolphins, these labels would be compelled to robustly improve their bycatch requirements.

What happens when bycatch is above sustainable levels?

There is no question that a fishery should not be allowed to reach the point at which it may cause a population to decline. And yet many dolphin and whale populations are facing extinction because of bycatch, and urgent and effective government action is needed.

There are populations in every ocean where this is occurring – from Europe, New Zealand, Africa, Asia to the Americas. Baiji or Chinese river dolphins were declared possibly extinct in 2006. Vaquitas in Mexico, New Zealand Māui dolphins and the Baltic harbour porpoise are all heading for extinction because of entanglement in fishing gear. And many more populations are declining because of bycatch, including New Zealand Hector’s dolphins, Atlantic humpbacked dolphins, Franciscana dolphins, South Asian and Ganges river dolphins, Indian Ocean Irrawaddy and humpbacked dolphins, Arabian Sea humpback whales and North Atlantic right whales. 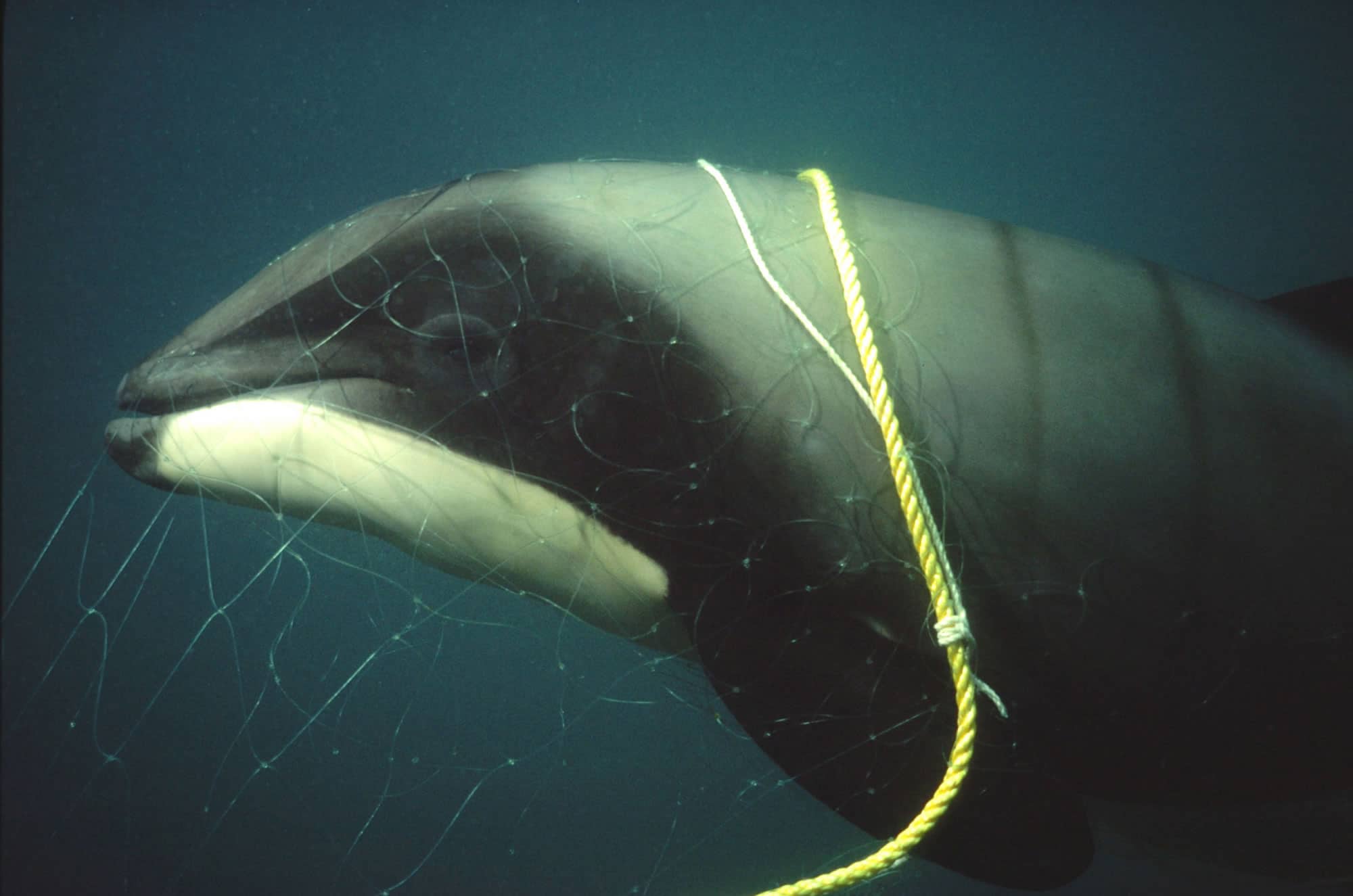 Bycatch is pushing some species towards extinction

As well as the terrible suffering involved, we should also remember that a healthy planet Earth requires thriving populations of whales and dolphins. They play an integral role in our ocean ecosystems.  They help fertilise the phytoplankton which give us half of our oxygen, on which fish populations depend, and the means by which the ocean stores most of our carbon.

So what are we doing?

There is hope. WDC is appointed by governments to taskforces in the UK, US and New Zealand and we engage with decision-makers all over the world to reduce bycatch in specific fisheries.

Most bycatch happens in gear that is actively fishing. We need to be aware that bycatch is not adequately monitored or reported and there are very few cases where effective action has been taken to reduce it. So we call on governments of all fishing nations to put laws and measures in place to require robust dedicated bycatch monitoring, prevention and mitigation. A duty of care to prevent bycatch should be expected as standard in all fisheries.

We are working with industry partners and manufacturers to modify fishing gear as a way to reduce risk. Our campaigns have pressured government managers to take action. We provide expertise to stakeholders and we are educating the public about possible solutions.

If I choose to eat fish, what can I do?

Make a donation to help our work to prevent deaths in fishing nets.