As a campaigning organisation it can sometimes be frustrating to see the cogs of change grinding so slowly. I certainly feel it and I’m sure you do too. Back in 2014, WDC launched a high profile campaign calling on Richard Branson, as a founder of the Virgin brand and someone who has a stated interest in marine conservation and environment issues, to put his money where his mouth is and use his influence to stop Virgin Holidays promoting trips to SeaWorld parks. Our campaign video went viral and within days, Virgin announced its pledge to no longer work with facilities capturing whales and dolphins from the wild and invited others in the tourism industry to sign up to this pledge too.

A good start…. but getting a major travel company to radically change policy is a bit like getting a huge oil tanker to change its direction of travel…. it takes time.

Quickly after making this pledge, Virgin held an unprecedented international two-day multi-stakeholder meeting bringing together individuals from all sides of the captivity debate. We participated in these ground-breaking meetings along with other whale and dolphin welfare experts, and representatives from the captivity industry, including SeaWorld. Meanwhile, Virgin continued to seek support for its pledge against wild capture, which was signed by more than 30 facilities holding whales and dolphins in captivity. 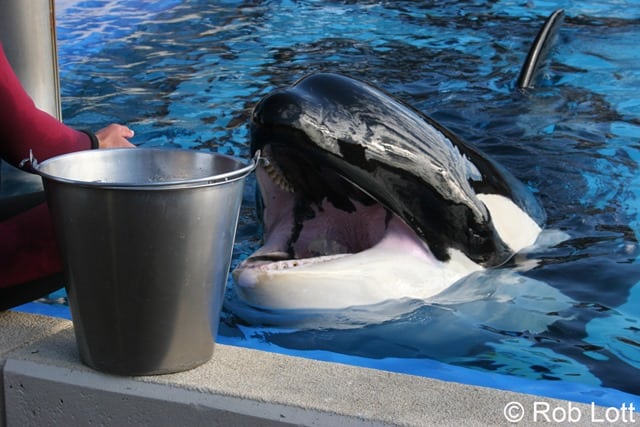 At WDC, we pride ourselves on dealing with facts, not hearsay, not opinion but peer-reviewed scientific fact. With this in mind we kept up the pressure on Virgin (and other tour operators) but had to wait a few more years for the next significant development. In 2017 Virgin announced that that they would no longer sign up any new attractions that feature captive whales and dolphins for theatrical shows, contact sessions (such as swim-with-the-dolphins experiences) or other entertainment purposes.

Progress…but a little like my old school reports this left ‘much room for improvement’.

The statement also highlighted Virgin’s ongoing commitment to supporting alternatives to captivity, including whale and dolphin watching. Crucially, the announcement went on to pledge Virgin Holidays’ support for the creation of coastal sanctuaries and they have put money into the National Aquarium of Baltimore’s efforts to create a sanctuary for captive bottlenose dolphins which will be like the one we’ve recently opened in partnership with the SEA LIFE Trust for ex-captive beluga whales off the coast of Iceland – a world’s first.

Fast forward to 2019 - five years since we launched our campaign – and we are delighted that Virgin has taken the huge step to stop selling tickets to SeaWorld and other attractions that hold whales and dolphin in captivity. This is a massive campaign success for us and a bold decision for Virgin that has attracted media interest around the world. We applaud Virgin Holidays and thank them for making the right decision.

Sir Richard has always been keen to be positioned as an influencer and the trailblazer on so many initiatives throughout his career and for this he deserves credit. The momentum against facilities keeping whales and dolphins in captivity continues to build as the calls for change get louder in the board rooms of the major driving force for the captivity industry – the tour operators.

Other companies like Thomas Cook have already dropped SeaWorld from their customer offering and our sincere hope is that other companies such as TUI and British Airways Holidays will follow suit and help to end the cruel and outdated practice of keeping whales and dolphins in tanks for ‘our entertainment’.

The biggest debt of gratitude goes to you, our wonderful, compassionate supporters, for answering the call when it came and getting involved in this hard-won campaign.

This is your success – thank you.

Make a donation to help us end cruel captivity for good