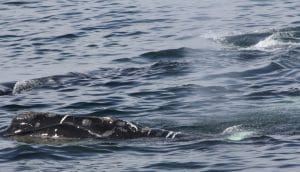 Researchers in Alaska have documented the song of the North Pacific right whale.

Most people know that humpback whales sing to each other, but now it turns out right whales have their own special songs as well.

Using moored acoustic recorders, researchers from the National Oceanic and Atmospheric Administration (NOAA) collected data from five locations in the Bering Sea off Alaska’s south-west coast for eight years before finally identifying that the repeating sound patterns were coming from a male right whale.

“It was great to finally get the confirmation when we were out at sea that yes, it is a right whale, and it’s a male that’s singing,” said NOAA Fisheries marine biologist Jessica Crance.

Three separate species of right whales are known to exist: Southern (hemisphere), North Pacific and North Atlantic.  All three species were decimated by whaling but North Atlantic and North Pacific right whales have failed to rebound even after protection. According to Nicola Hodgins, Policy Manager at Whale and Dolphin Conservation, this could be the result of a loss of cultural knowledge as to where the breeding and feeding grounds are or due to human causes. “For example, the North Atlantic right whale is struggling as a result of ship strike and entanglement in fishing gear,” she says.

Right whales produce a number of different sounds, including moans, screams, warbles and a call like a gunshot. According to Jessica Crance, the songs of the North Pacific right whale resemble those of the Atlantic walrus.

This sub-population of North Pacific right whales is extremely rare – only about 30 individuals remain. And this raises a question about why they are singing. “There could be a number of reasons,” says Nicola Hodgins. “It could be that with their dwindling numbers they have a more urgent need to communicate. However as singing in whales is known to be reproductive in nature, the males are perhaps looking for a mate or competing amongst each other.”

We need right whales to survive – our future depends on it.