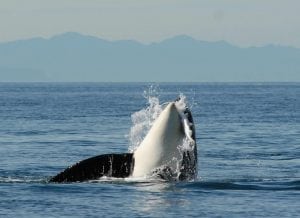 The Whale Centre in Tofino, British Columbia has revealed that a new calf has been spotted with an endangered orca population known as the Southern Residents.

The Southern Resident orcas of the Pacific Northwest is a group of 75 individuals, the only orca population listed as endangered in the U.S. As part of the Orca Salmon Alliance, we work with a number of other organisations to raise awareness and take action for these magnificent creatures.

This community was listed as endangered under Canada’s Species at Risk Act in 2003 and under the United States Endangered Species Act in 2005 after a 20% decline in the population between 1995 and 2001. The main threat to their existence is a lack of their primary prey, Chinook salmon. But they are also affected by toxic chemical pollution, increasing ocean noise, and vessel disturbance.

Researchers with Canada’s Department of Fisheries and Oceans and the Center for Whale Research were notified and are reviewing the photos taken by The Whale Centre.

The Center for Whale Research – the official keepers of population data for Southern Resident orcas – have yet to confirm the new calf and provide an update on who the mother is, and we eagerly await their official announcement. Whilst one of the pod's orcas (J41 or Eclipse) was reported to be in the late stages of pregnancy by researchers, she has not yet been seen with a calf, and the families of new calves sometimes group so closely together, it can be hard to determine who the mother is right away.

As always with the Southern Residents, we are cautiously optimistic for the future of this unique community. New calves are beacons of hope, and also reminders that the orcas are doing their part to survive and thrive – it’s up to us to make sure they have an environment they can live in.