David Yeadon is a WDC supporter who visited Vancouver Aquarium two years ago, when he was 16. What he saw shocked and upset him so much that he asked us if he could tell his story.

When I visited the aquarium in the heart of Vancouver’s Stanley Park, I arrived with the understanding that the aquarium was home to some rescue mammals such as the sea otter, a dolphin and a false killer whale.

As I entered through the front doors, I realised that it was full of fish from all over the world and the odd fish caught my eye and I’d stare at it and then read about it on a small sign with three or four lines of basic information.

After spending roughly an hour around the fish we went outside to see the sea mammals. I have always been passionate about the fact that sea mammals in captivity don’t have a great quality of life, and that’s why every month for the past 11 years, I’ve donated to WDC.

I understand that the aquarium holds rescue sea mammals and no breeding takes place, but as I walked down past the penguins, I struggled to understand how this could be a suitable environment for them as it was incredibly hot. I then proceeded to walk past the sea otters. I was surprised all they did was swim back and forth in a tiny pool. I didn’t understand why any of the people there were enjoying this and smiling and taking photos of these imprisoned mammals.

At this point I have still not made a remark to any of the employees there and walked past quietly. My father then asked me if I’d like to leave as he knew that I was not enjoying the so called ‘entertainment’ that was presented in front of me. I said ‘no’ and then went on to see the dolphin which then sparked the passion to write this blog. 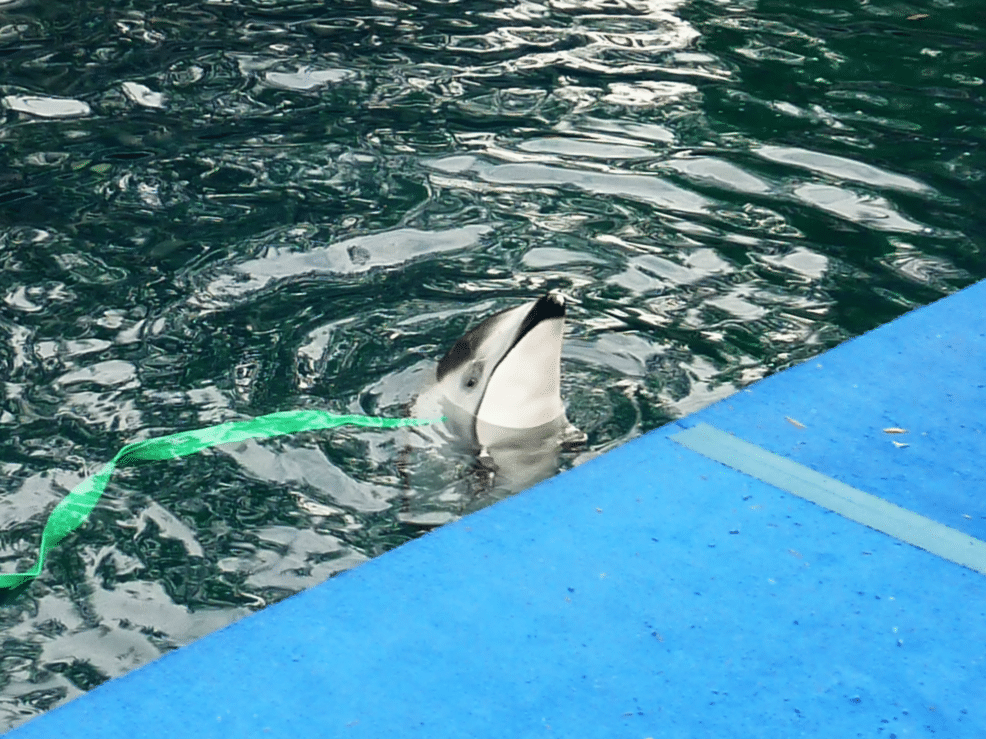 This is Helen, now the sole dolphin held at Vancouver Aquarium

The second I saw Helen, the dolphin, in a pool smaller than the pool at my hotel I was shocked and immediately disturbed. In such a small and disgusting environment, I noticed that she didn’t even have enough space to swim in a straight line and spent a lot of time pushing her head into the bottom of the pool. If this wasn’t an obvious sign that captivity is cruel, then I don’t know what is. I couldn’t believe what I was seeing as I walked further along the wooden path that surrounded the pools. I read on a board that Helen was rescued after having been caught in fishing nets and after the amputation of her fins, she was unable to be returned to the wild.

I then read that both Helen and Chester, the false killer whale in the neighbouring pool were both being used for research. I went to ask a member of staff who was standing by the pool a bunch of questions about them. The first question I asked was why Chester’s dorsal fin had collapsed. The staff member struggled to give me an answer. After a bit of thinking, he said that when Chester was rescued he was kept out of water for around 48 hours and therefore the cartilage collapsed as it couldn’t support it. I didn’t believe this as I believe it would have most likely been caused by the stress of being in such a small environment. I then asked him what research takes place and how often it does so.

He took another long pause before answering and said that marine biologists from New Zealand came to the park to research why dolphins get caught in the fishing nets. He explained that the research consisted of taking away their vision by using a jelly-like substance and then placing obstacles in the pool and seeing how well they could navigate past these obstacles. At this stage, my mother asked why the pools were so small and he replied that the pools have ample space as they no longer have the need to hunt because their food is provided for them. This makes their return to the wild even more difficult as they have taken away a massively important skill of hunting for them as they don’t make them work for their food. Watching them swim frantically around the pool was making it seem as though the pools are not big enough for them to expend their energy. I don’t see how a dolphin struggling to swim properly in a pool has an ‘ample amount of space.’ 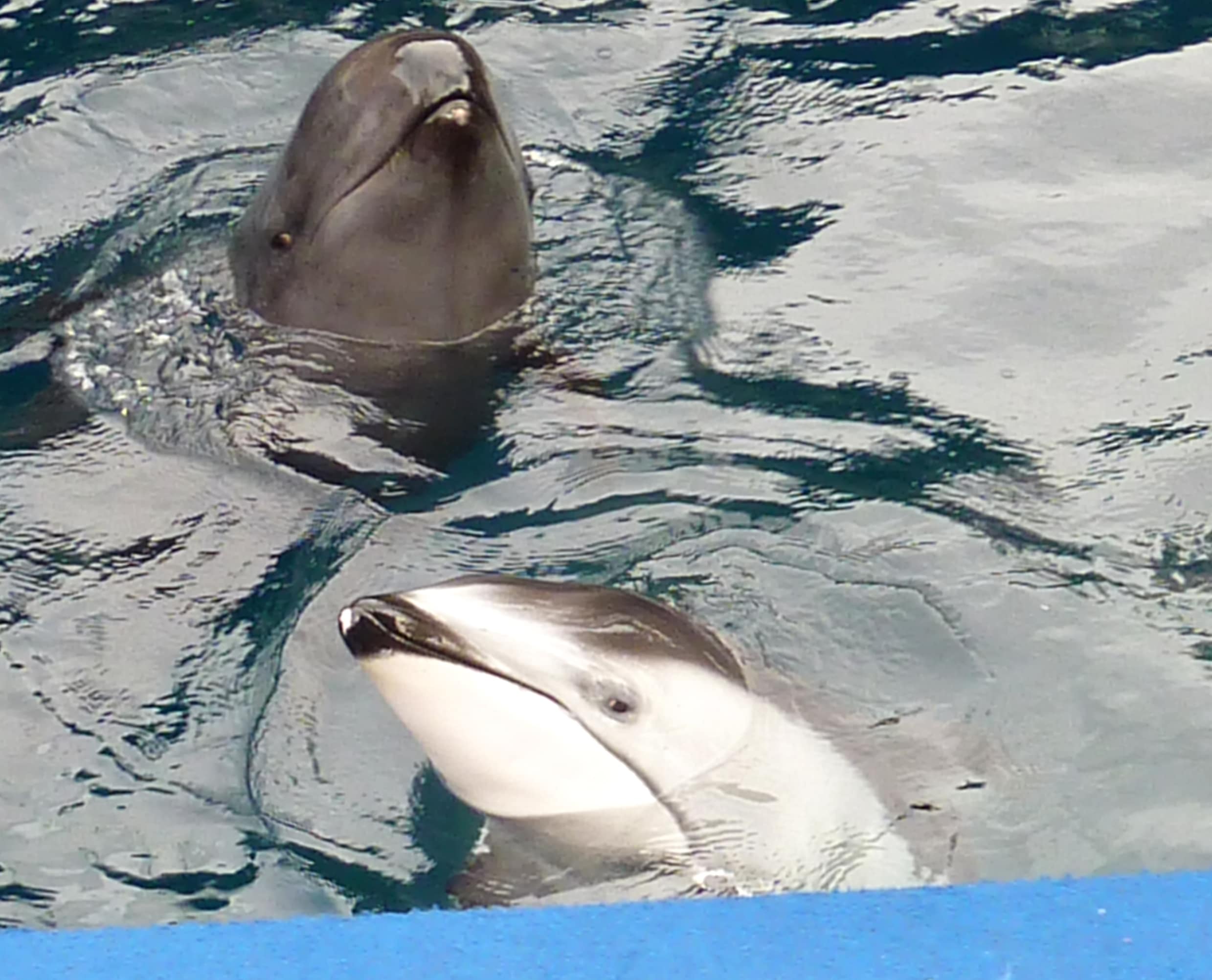 Helen and Chester (now deceased) in the tank they once shared

The pool previously held an orca which I find impossible even though it was slightly bigger as it was a combination of both pools.

The last question I asked the man was why the park lied about information on the information board. I brought this up as on the board talked about how they are used for research, making it sound like it happens regularly whereas the truth behind this is twisted as they have only been used one time in the past so are not currently being used for research – to my mind, the board should explain how and why they have been used for research previously. The man agreed with me but then said that they might be used sometime in the future for more research, but no plans were currently in place for this to happen anytime soon.

I was forced to stop asking questions as a young child had dropped something in the pool and the member of staff had to go to help – ‘saved by the bell’ I’d say, as I had many more questions to throw at him and he was probably very happy to get away from me! I left this area of the aquarium as it was so heart-breaking to watch such majestic creatures live such dull lives.

As I went to the information desk, I found out that a year before two belugas had died in their care. She failed to tell me that it was a mother and its calf as I’m sure she didn’t want me to know at the time. I’m no whale and dolphin specialist but surely the child should outlive the mother?  I have no information on the cause of death, but I would hazard a guess that captivity would have been a contributing factor.

I thought the aquarium was a place that should be educating people but instead all they did was lie and create a place where people can think this is acceptable. I also learnt that I a 16-year-old boy knew more about the whale and dolphins than a member of staff employed by the aquarium.

I feel that the owners are probably laughing at the amount of money they are making whilst they pretend to care and falsely educate young children. I do not feel that it is acceptable to bring children up thinking that this is ok. I fully understand that some whales and dolphins cannot be released back into the wild and that since my visit, Vancouver Aquarium has agreed to end its whale and dolphin displays and so Helen the dolphin will be the last to be held in its concrete ocean. This is a great victory but it’s only the start of a long battle to make this world a more whale and dolphin friendly place.

You can help end the cruelty of captivity.

Make a donation and help WDC make sure whales and dolphins like Chester and Helen can live safe and free.