WDC is deeply saddened to learn of the death of Hardy Jones, filmmaker, dolphin protection advocate and founder of BlueVoice.org. Hardy worked tirelessly to bring the beauty and vulnerability of whales and dolphins to the public’s attention and was a brave campaigner, exposing the threats they faced from drive hunts and ocean toxicity.

Hardy began his career in radio and worked for (amongst others) United Press International and CBS News. He moved into television documentary production in the late 1970’s and produced over 75 films for broadcasters such Discovery, TBS, and National Geographic.

In 2000 Hardy founded ocean conservation organisation Blue Voice, with Ted Danson. The organisation’s mission is to protect and save marine mammals, and to raise popular awareness about toxic chemicals in the oceans.

Hardy will be greatly missed and our thoughts go out to his friends and family at this very sad time. 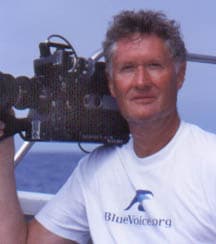