Acclaimed writer, broadcaster and WDC ambassador, Philip Hoare has recently returned from a trip to New Zealand where he was fortunate enough to come across both sperm whales and endangered Hector’s dolphins. Collectively known as New Zealand dolphins, Hector’s and Māui dolphins are dying in fishing nets at a catastrophic rate. Unless we take action, they are heading for certain extinction.

In this excerpt from his travel diary, Philip reflects on his encounters with New Zealand dolphins.

New Zealand is an old-new country bordered by rubble, everywhere, its shores scattered with rocks and boulders as if the builders had only just left.  It was discovered, in the act of rising up out of the sea, by a Dutchman, Abel Tasman, on 13 December 1642, ‘a great land uplifted high’.  Since I last came here it has been lifted up even higher, the result of an earthquake and its even more violent aftershock that shook the land from the sea.  Hundreds of people lost their lives in those ten seconds and what happened afterwards as the soil itself turned liquid, an underground sea.

Two years ago, the land lurched again, and along the coast of this Polynesian island the road to Kaikoura collapsed. It has yet to be properly repaired, so great was the power that undermined it. Here the black rocks rise out of the sea, out of the deep canyon beyond, so deep it could swallow up Christchurch cathedral.  I watch a sperm whale dive into it, raising his huge tail, perpendicularly against the sky, as if in frothed defiance, before plunging below.  It is hard to resist the notion that I might be taken down, too.

I’m out at sea with the Kaikoura Whale Watch, run by Maori people who believe the whales to be their ancestors, in a similar way they believe the whales to be the same as the kauri trees, both grey and wrinkly.  I watch from the upper deck of the boat as a sperm whale surfaces off the bow, the big-headed blower leaving me, raising his tail emblematically against the deepest water I will ever know and the tallest mountains I will ever see, sewing the two together in the form and function of his flukes.  It all seems so perfect, this union.

Further south, where the turquoise water feels the chill of the Antarctic, the colour of interior ice, we sail out for an even more extraordinary encounter.  Only a few minutes out of Akaroa Harbour, we are surrounded by a pod of Hector’s dolphins, the smallest marine mammals of their kind.  They are my size.  Like the guardian whales, I’ve met them before.  They rush up like old friends with long memories.  It is almost impossible to believe how beautiful they are, with their grey, black and white markings, like fine porcelain, complete with rounded dorsal fins that look like the handles on a tea cup.  They occupy these turbid coastal waters because they feel safe from predators here. 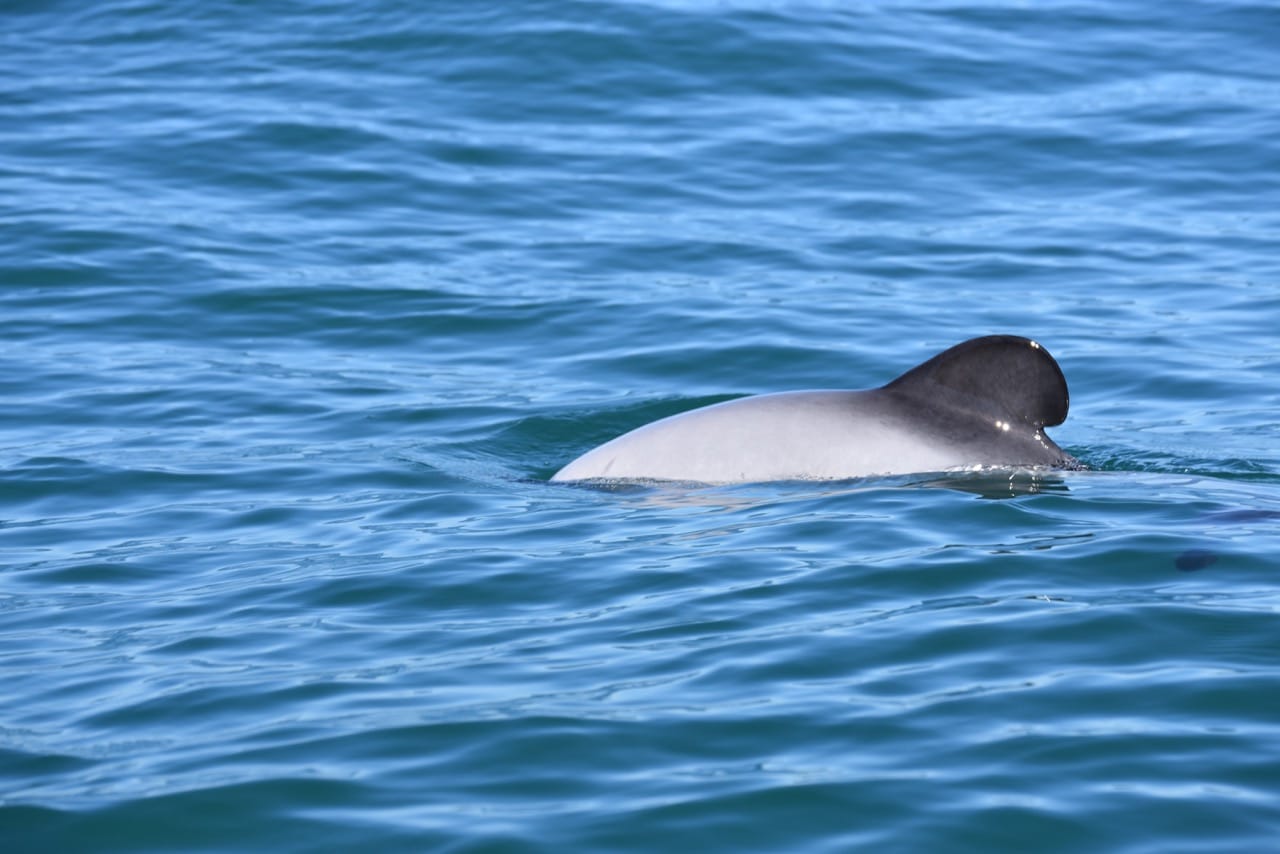 I wonder how they coped with the earthquake and its seismic shocks.  But there are other dangers that they face.  As we leave the pod, close by, fur seals slither in rock pools under volcanic strata, stained with algal growth like a painting.  A body drifts across our bows – a seal whose head has been neatly excised at the neck, bitten clean off.   It is a violent image.  We cannot account for the animal’s decapitation.  Fur seals, like the Hector’s dolphins, are passive and sometimes active victims of the fishing industry here.  It is hard to imagine how this beautiful land, and its beautiful animals and people, can bear witness to such threats.  For all its vast natural beauty, this country, and the sea around it, bears witness to the fragility of our world.  Down here, in the biggest ocean that envelopes almost half of our planet, a tiny marine mammal is fighting to survive.  Like the huge sperm whales of Kaikoura, the fate of the diminutive Hector’s dolphins is in our hands.

As Philip reflects, we share a collective responsibility for the future of these little dolphins and the good news is we can save them. If the New Zealand government keeps its election promise to ban destructive fishing methods from the areas where the dolphins live, they will begin to recover. It’s rare in conservation that the solution to a problem is so clear and this simple. It’s a no-brainer – ban set nets and trawls from the dolphins‘ home and prevent their extinction.