Icelandic whalers out hunting fin whales for the first time in three years appear to have killed a rare, protected blue whale (or blue/fin hybrid) by mistake.

Images documenting the slaughter of what is an iconic symbol of the natural world have deeply concerned international whale experts and confirm the indiscriminate and cruel nature of whale hunting. 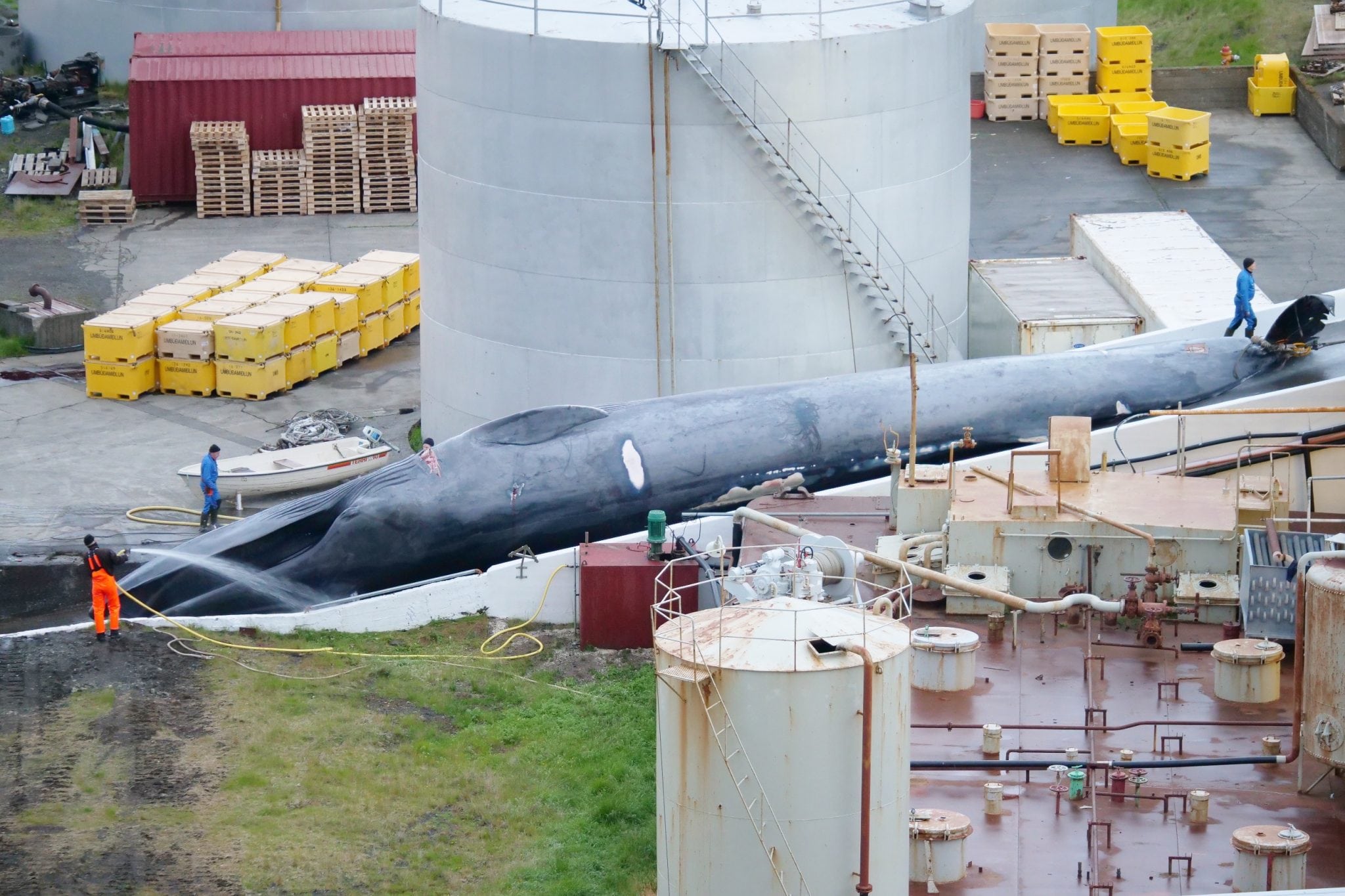 Just before midnight on Saturday, 7th July, the Hvalur hf. fin whaling company landed its 22nd catch of the season at the whaling station at Hvalfjörður, Iceland.

The whale hauled up the slipway immediately caught the attention of Arne Feuerhahn, a German conservationist documenting the hunt as it was strikingly different in appearance to a fin whale.

Whaling company Hvalur hf, lead by CEO, Kristján Loftsson resumed the controversial fin whale hunt on 22nd June after a two year break. The season could see as many as 238 endangered fin whales killed under a self-allocated quota, which defies the international ban on commercial whaling.

Blue whale experts have studied the images of the whale landed last Sunday and conclude that it is a either a male blue whale or a blue/fin hybrid.

Blue whales are the largest creature on the planet. Reaching as much as 33m in length, they are listed as endangered, with a global population estimated at only 10,000 – 25,000 individuals. They have been protected from hunting since 1966 and are the symbol of the mass slaughter that was industrial whaling in the 20th century. It is estimated that up to 90% of the global population of blues was wiped out by commercial whaling operations.

Blue\fin whale hybrids are relatively rare, Icelandic authorities confirm that five hybrids have been identified by researchers since 1986 around Iceland.  Four of these were killed by Icelandic whalers. One has become famous and is very popular with whale watchers off Husavik and was identified as a hybrid using non-lethal methods.

Vanessa Williams-Grey, policy manager at WDC, said: “This incident confirms that whaling is still a serious threat to endangered whales. This industry was out of control in the 20th century and it remains so today. What Kristján Loftsson is doing is nothing short of an environmental crime.”

Arne Feuerhahn, CEO of Hard to Port commented; “This is an unacceptable tragedy that leaves people around the world speechless. It is very unfortunate that the reckless and irresponsible actions of a single individual stain the reputation of this progressive and beautiful country.”

Dr Marianne Rasmussen who heads Project Blue Whale at the University of Húsavík, which maintains a catalogue of 200 blue whales studied off Iceland, commented: “Based on the physical appearance and colouration of the lower jaw and baleen plates, it cannot be a fin whale. The mottled-grey colouration of the body points toward a blue whale, so the whale in question is either a blue whale or a blue/fin hybrid, genetics can confirm this.”

Valgerður Árnadóttir, leader of the Icelandic Vegetarian Society and founder of the group Stop Whaling in Iceland, expressed her utmost concern, saying: “Not only are they killing endangered fin whales but they could also have killed a blue whale: a species protected from hunting for over half a century. The whole business of whaling in Iceland reeks of corruption and there aren’t even any buyers for the meat. In 2016, they had to throw millions of dollars’ worth of whale meat away because it was not even fit for animal consumption.”