To save whales, dolphins and the world, we need a global treaty on plastic pollution

By Sonja Eisfeld-Pierantonio | 16th November 2021
Millions of tonnes of plastic enter the environment every year impacting ecosystems and species. Plastic...

By Julia Pix | 9th November 2021
Salt is a remarkable whale. In fact she's probably the most famous humpback whale in...

Whales, trees and butterflies – how we’re giving a voice to the ocean at COP26

By Ed Goodall | 3rd November 2021
I'm in Glasgow in Scotland representing WDC, Whale and Dolphin Conservation at COP26, the UN's...

Save the whale, save the world – because our lives depend on it

By Ed Goodall | 26th October 2021
Carl Sagan famously called our planet a 'pale blue dot' when he saw the first...

The horror – reflecting on the massacre of 1,428 dolphins on the Faroe Islands

By Astrid Fuchs | 28th September 2021
Like you and millions of people around the globe, I felt horrified by the news...

By Sonja Eisfeld-Pierantonio | 13th July 2021
Plastic is everywhere. When I look around me, I see a gazillion things made of...

Did you know dolphins use tools? Meet the Shark Bay spongers …

By Alison Wood | 29th June 2021
Like humans, dolphins live in societies with unique cultures. Like us, they bond with others...

By Erich Hoyt | 8th June 2021
On World Ocean(s) Day let's remember that there is only one ocean on our world....
Load More

Here’s a sight I hoped never again to witness. A boat being scrubbed and repainted on Reykjavik harbour will generally arouse little attention from passing tourists, but this is different and far more chilling. This is the Hvalur 8. It is a fin whaling vessel and it is being readied to return to the high seas in pursuit of endangered fin whales. 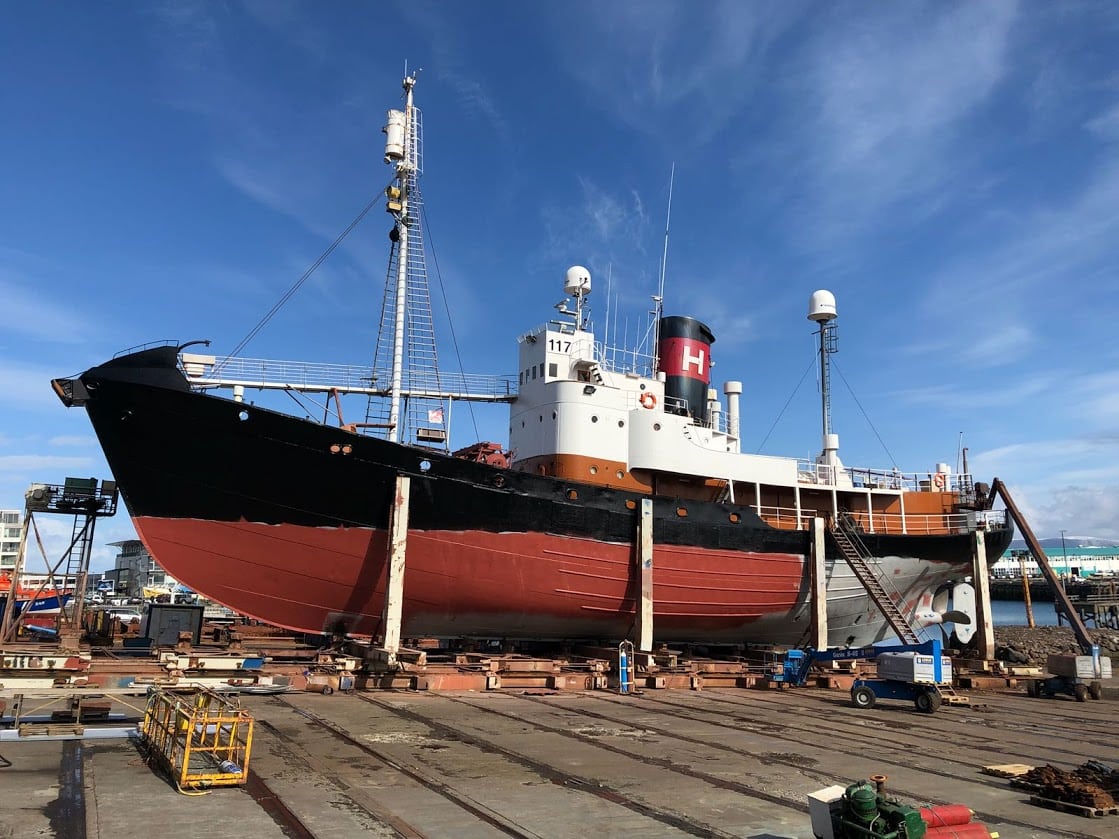 Even the photo makes me shiver. I recall a summer day in 2015; I’m aboard the Elding whale watch boat, taut with excitement as we leave the harbour. I can’t wait to meet the whales and dolphins in Faxafloi Bay! But within minutes, we realise that another vessel is shadowing us, a few hundred metres off our port side. It is trailed by a second, near-identical boat. Even this far away, despite the sunshine and happy expectation of the whale watch passengers, a shadow falls. Somehow, the day is darker and I am not surprised when my binoculars reveal our silent companions: the Hvalur 8 and its sinister twin, the Hvalur 9.

Our guide tells me that we are fortunate that these boats passed us whilst heading out to the fin whaling grounds. The week previously, further out to sea, passengers had witnessed with horror the grim spectacle of a whaling boat heading for the processing station at Hvalfjordur, two dead fin whales strapped to its starboard side.

2015 marked a record catch of 155 fin whales, but then followed a welcome reprieve during the 2016 and 2017 whaling seasons, potentially saving the lives of over 300 fin whales.

This reprieve came, thanks to a very public spat between Iceland’s only fin whaler, Kristjan Loftsson and Japan, his only buyer. Mr Loftsson accused the Japanese of having antiquated methods for analysing whale meat, commenting at the time: ‘if the Japanese do not take up modern research methods, as are used here, so that similar methods are used in both countries, then Hvalur can no longer continue whaling for the Japanese market. Japan is our major market, so therefore [whaling] would automatically come to an end.’ The Japanese riposted that their methods were state of the art and highly adept at identifying contaminated meat!

But this year the hunt resumes – why?
Last month came the news I’d been dreading. Not only will the fin whaling resume from 10 June, but Loftsson has secured a larger quota and extended hunting grounds. This year, as many as 238 fin whales could die, as Loftsson has permission to hunt in the waters to the east of Iceland as well as to the west, vastly increasing his chances of locating the whales.

Grim news indeed. But what has changed? Why has Loftsson, at the age of 74, decided to resume fin whaling, despite his uncomfortable relationship with Japan, despite declining demand for whale meat and despite growing opposition from within Iceland as well as the wider world community?

Nothing if not resourceful, Loftsson realises that appetite for whale meat, even within Japan, is rapidly declining. After devising a long line of gimmicky uses for whale products, including in pet food, as an ingredient in bio-fuel and craft beer, his latest market niche is *fanfare* – dietary supplements.

Yes, Mr Loftsson wants to kill endangered whales in order to use dried whale meat extract in iron supplements for people with anaemia 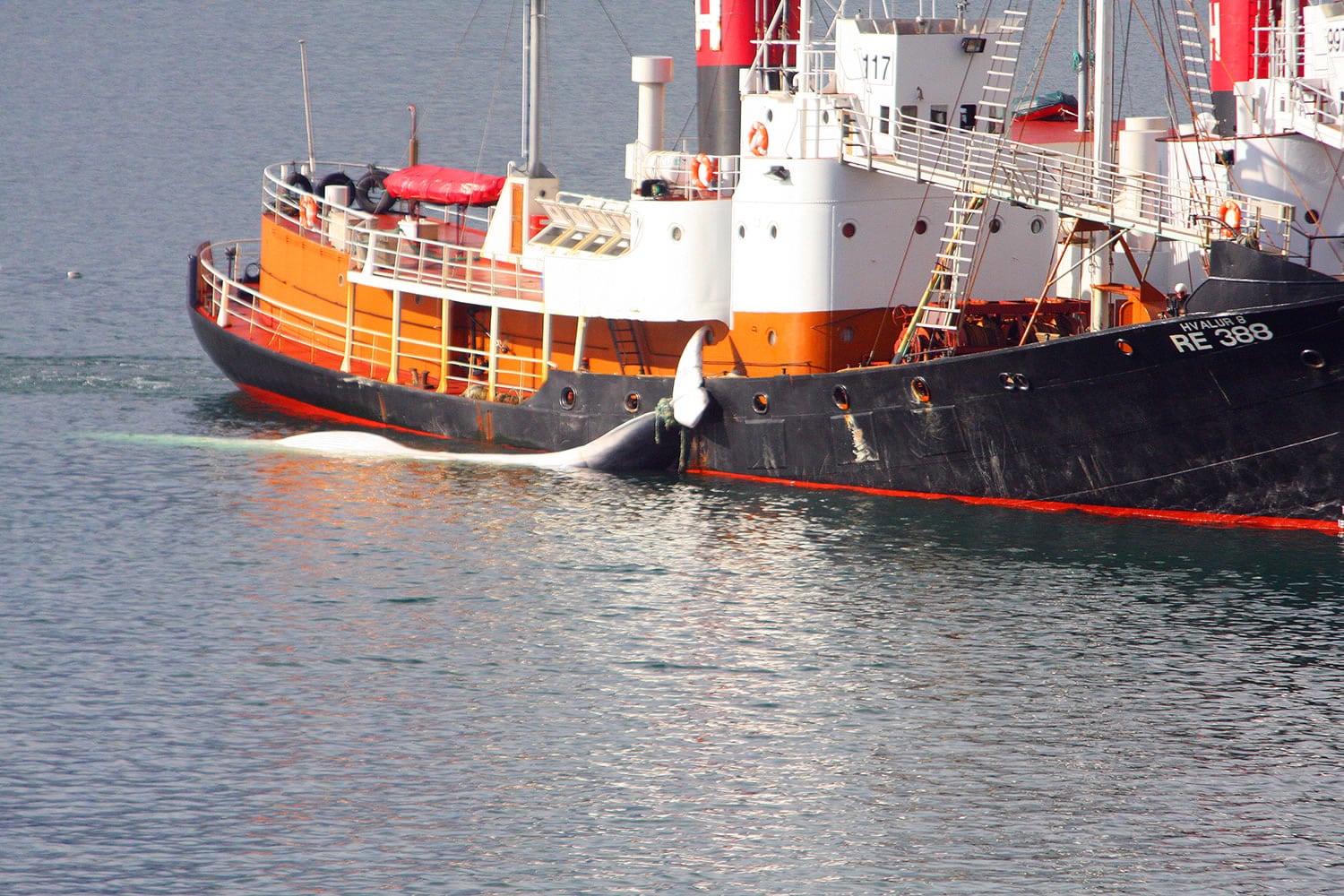 How can we fight this?
We’ve worked hard to expose Loftsson’s crackpot ideas and publicise the links between H B Grandi seafood and his whaling company. In fact, conservation groups have made the concept of seafood linked with whaling such a hot potato that when I met the H B Grandi CEO, Vilhjalmur Vilhjalmsson, at last month’s Global Seafood Expo in Brussels alongside Kate O’Connell of AWI (Animal Welfare Institute), he expressed relief at the recent sale of Hvalur-linked shares in Grandi to Brim, another Icelandic seafood company – and a far less controversial shareholder! We’re also lobbying hard at national level and within the EU for an end to commercial whaling and a ban on the transit of whale meat through EU ports.

Significantly, also, even within Iceland, public support for fin whaling is rapidly falling away. This latest venture is being greeted with derision – a recent newspaper article called it a ‘desperate pretext’.  And a recent survey showed that only 35% of Icelanders support fin whaling.

An appetite for change within Iceland
I’m also incredibly heartened by what appears to be a growing movement to challenge the whaling at government level within Iceland. We are fortunate that the current coalition government is headed by a passionate environmentalist, Katrin Jakobsdottir, leader of the Left-Greens and widely regarded as one of the most popular and trusted politicians in Iceland. Since 2015, the Left Greens have an official policy of opposing whaling, and during her time in opposition, Katrin has tabled probing questions in parliament on whaling.

Earlier this month, it was announced that a review into the future of whaling will be held later this year. Several MPs have called for the review to be overseen by their prime minister and for it to take into account the economic and social impact of whaling upon whale watching and other tourism sectors and also take account of scientific research, animal welfare and other concerns.

Thorgedur Gunnarsdottir, the previous Fisheries Minister, appears supportive. She inherited a whaling quota set by her predecessor, but during her short time in office, she proved that she was no fan of maintaining the status quo without good reason, commenting ‘it’s fairly clear that, in the long run, we are not going to live with this whaling policy for ever and ever’ and has recently asked the current Fisheries Minister some pressing questions on whaling.

Outside parliament, tourism representatives – weary of the negative publicity that whaling brings to Iceland’s door and aware of the grim reality that every whale harpooned is one fewer to be watched – are increasingly vocal on this issue. Rannveig Grettarsdottir, owner of the Elding whale watch company and a senior player in the Icelandic tourism sector, is a long-time friend of WDC.

In a recent article, she states that whaling harms whale watching and has had a negative impact on Iceland’s image and its exports. Rannveig warns that, outside Iceland ‘there will be no understanding of our hunt of fin whales, a species still threatened with extinction. We should not get caught up with national pride when it comes to making sensible decisions to stop whaling.’

This is key. Change is always best when it comes from within and it is clear that Icelanders themselves are seriously questioning the whaling. Loftsson has shown himself to be out of step with the mood of the nation. The voices challenging him are ever louder – you can be sure that we will be supporting them every step of the way.

We need your help to end this cruel practice. Please support our work and make a donation to stop whaling in Iceland. Thank you