WDC has teamed up with Police Scotland and Scottish Natural Heritage (SNH) in a bid to educate watchers on how to stay within the law and other practical guidance relating to the watching of marine wildlife, including whales and dolphins.

The initiative was launched at Chanonry Point on the Black Isle in Scotland, one of the most famous dolphin-watching spots in the country, and public information has been produced for people wanting to watch dolphins or just have fun on the water.  It warns that anyone found disturbing marine wildlife such as dolphins, whales or porpoises could face criminal charges.

Despite whales, dolphins and porpoises being protected in the UK under the Conservation (Natural Habitats) Regulations 1994, a number of incidents were reported in the area last summer involving personal boats and kite surfers risking disturbance to dolphins. 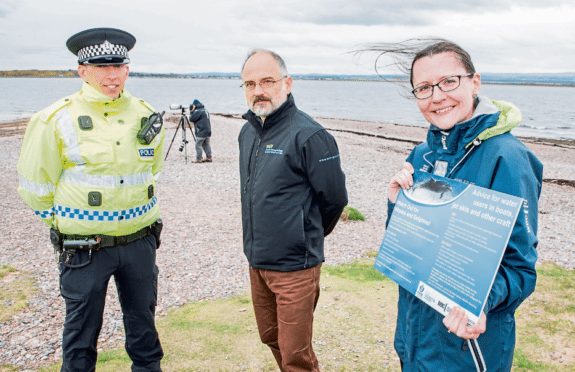 “We want everyone to have fun, but it’s important we are all aware that when we’re on the water we’re sharing that space with whales, dolphins and other marine mammals for whom the sea is their home.”

Local tour boats operating on the Moray Firth have signed up to the Scottish Marine Wildlife Watching Code displaying their dedication to protecting the special creatures found in Scotland’s waters.