Coming in the wake of recent efforts to end the cruel practice of captivity for whales, dolphins, and porpoises in North America, a bill currently in Canada’s Senate, S-203 (the Ending the Captivity of Whales and Dolphins Act), would phase out captivity of whales, dolphins, and porpoises in the entire country, with the exception of rescue and rehabilitation to return them to the wild.  This effort is even more important now, following the death of Chester the false killer whale at the Vancouver Aquarium, leaving Helen, a Pacific white-sided dolphin, as the only individual still held at the Aquarium.

In Canada, Ontario has passed a law to phase out orca captivity, and the Vancouver Park Board in British Columbia has banned whale and dolphin captivity at the Vancouver Aquarium.  While individual provinces and states have been taking steps to end the practice of holding whales and dolphins for entertainment in North America, both the U.S. and Canada have yet to pass nationwide laws addressing whale and dolphin captivity.  In response to growing public opposition to captivity and an increasing awareness of the intelligence and complex social structures of whales and dolphins, many countries, including France, are taking steps to end or phase out captivity.

After being studied and developed for a year, S-203 was introduced to Canada’s Senate this year by Senator Murray Sinclair of Manitoba, and passed out of the Committee on Fisheries and Oceans this October.  It must now pass a third reading and a vote in the Senate before proceeding to the House of Commons and possibly becoming law next year.

A vote has been delayed because of concerns from Conservative lawmakers, which the bill’s coalition of supporters say have been addressed.  Environmental groups in Canada are asking for help in a social media campaign to ensure a reading and a vote before the Senate breaks for the holidays, and to thank Senator Sinclair for his support and for being a voice for captive marine mammals in Canada.  Canadians are encouraged to reach out to their Senators to educate them about the cruelty of captivity and ask them to vote on S-203, and to use social media to put pressure on politicians before Christmas.

The campaign is scheduled for December 5th and 6th, and will be linked by the tags #BillS203 and #cdnpoli.  You can read more about the development and progress of S-203 and the effort to end captivity for whales and dolphins in Canada here: “Bill S-203 Has the Power to End Whale and Dolphin Captivity in Canada”; and Canadian citizens can find out how to get involved here. 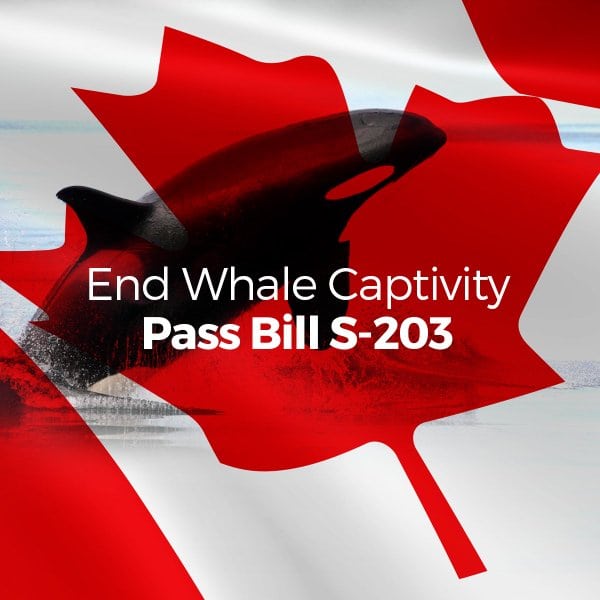