A cruise ship carrying thousands of passengers has arrived at an Alaskan port carrying the carcass of a 6m long humpback whale on its bow.

The Grand Princess, a 290 metre ship pulled into Ketchikan with the whale attached to a submerge part of the bow designed to avoid wave-making. It is not known if the whale, believed to be a juvenile, was alive or dead when the ship struck him or her.

A representative from the cruise line said that ship crews have guidelines on how to operate after spotting whales and alter courses and reduce speed to avoid them. 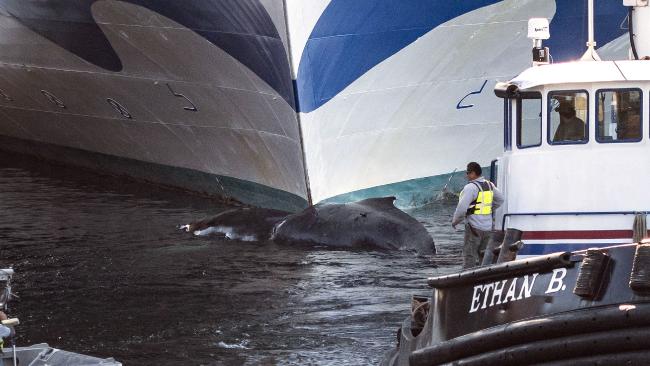 Whales and dolphins are often unable to avoid ships. They may not see the vessel as a threat, particularly in areas of heavier boat traffic where they are used to the noises around them.  In some cases, they may not hear the vessel until it’s too late.  Large ships cause something called a ‘bow null’ effect resulting in the engine noise (at the stern or rear of the vessel) being blocked by the bow.  Therefore, it’s very quiet in front of the vessel and the whale would not even hear the vessel until it has passed.

Many of these collisions go unnoticed meaning that the number of deaths is far higher than figures suggest. Studies in recent years indicate that, for populations in certain areas, up to one third of whales found dead display signs of having died due to a collision with a boat or ship.  Severe injuries may mean that a whale dies as a result many years later, but can also have an impact on the whale’s  social group.

WDC is working with international bodies and on projects to reduce vessel strikes all around the world, including in areas where whales or dolphins are particularly vulnerable. With your support we can continue this good work and prevent more of these needless deaths.