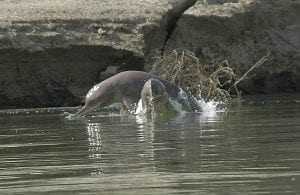 The Ganges River dolphin is one of the most threatened freshwater dolphins in the world. They live in rivers of Nepal, India, and Bangladesh. Nepal’s rivers all flow into the Ganges River in India and the dolphins in Nepal are living in the upstream extremes of their range.

Serious concerns have been raised again in Nepal about its dwindling numbers of endangered South Asian river dolphins. Researchers believe there are now fewer than 50 dolphins left and they have disappeared completely from one of the four rivers they once lived. This population is critically endangered and urgent action to stop its decline is the only way to save the surviving river dolphins of Nepal from extinction.

A recent survey detected only six river dolphins living in the Karnali River as a whole and not a single one in the Geruwa branch of the river where they have been regularly recorded in the past. Two dolphins are known to have died in recent years following accidental entanglement in fishing nets. The Geruwa branch of the river changed course eight years ago following a flood period. Whereas it previously flowed through Bardia National Park which provided some protection for the dolphins, its new path takes it through agricultural land and areas populated by local people. Water is removed from the river to water surrounding crops, lowering the depth in some places to such an extent that river dolphins can no longer live there. This coupled with increased fishing pressure, poses a serious threat to river dolphins especially in shallower waters as they can become accidentally entangled in the nets.

WDC is supporting a new project in the Karnali and Sapta Koshi rivers lead by Shambhu Paudel.  Shambhu plans to develop a science-based river dolphin recovery plan for the Government of Nepal to support and implement in order to save their remaining dolphins. He will be using photo-ID to gather detailed information about the surviving dolphins including their health, behaviour, social relationships, abundance, habitat use, movement patterns, and threats. Better information is urgently required on their critical habitat characteristics. Shambhu has already recommended emergency fishing and water extraction restrictions during the dry season to ensure the rivers retain reasonable depths for river dolphins to live safely.

This could be the last chance to save this critically endangered population of Ganges River dolphins in Nepal.