I have the pleasure of introducing another guest blog by Japanese whale and dolphin advocate Kame-Kujira-Neko. Kame is the author of the novel “Whales Ocean” and he regularly blogs about whaling and dolphin hunting, mainly in Japanese.

On 16th June, the Japanese Parliament passed a terrible new law for wildlife and the marine environment. The bill is called “Law on scientific whale research for the implementation of commercial whaling. I, however, prefer to call it the “Favourite Sashimi Act”.

This Japanese parliamentary term has been dominated by the so-called Conspiracy Bill and PM Abe’s nepotism scandal. Pitted against these, the “Favourite Sashimi Bill”, proposed by pro-whaling politicians, passed in no time and without any discussion except for one opposing question from one brave parliamentarian.

Most people in Japan don’t even know such a law was proposed and passed. There is a serious gulf between parliamentarians – stubbornly sticking to Antarctic whale meat – and the majority of people, who are simply indifferent. Unfortunately, the Antarctic ecosystem appears to have been forgotten. 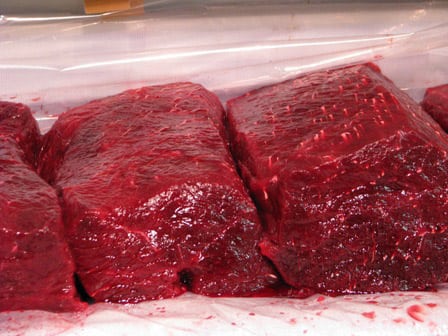 One might wonder why all the parties in Japan have agreed to pass this bill? Well, the ruling Liberal Democratic Party has historically been united with the pro-whaling circle. On the other hand, the All Japan Seamen’s Union (the labour union of Japanese sailors including employers of whaling business company, Kyodo Senpaku), has a strong influence on the opposition parties such as the Democratic Party and the Communist Party. There are no members of the Green Party in the Japanese parliament.

However, the “Favourite Sashimi Act” has many flaws and contradictions. First of all, this act is contrary to international law. Japan’s new whaling programmes, NEWREP-A and NEWREP-NP are almost certainly in violation of international treaties and the International Court of Justice (ICJ) ruling. But NHK, a Japanese public broadcasting company, reported that this domestic whaling law is a new authority for research whaling. How can domestic law justify something which has been proven to be in violation of international law? In my opinion, Japan’s claims are absolute nonsense.

Secondly, this law might infringe on the liberty of people much in the same way as the Conspiracy Act.

Among other things, the “Favourite Sashimi Act” will allow the authorities to refuse foreigners to enter the country if they are viewed as anti-whaling activists. But there is a high possibility that this law will be used arbitrarily. Current law has already prevented some peaceful activists from entering Japan. Who else might Japan reject in the future?

Thirdly, Japan has ratified the UN Convention on the Law of the Sea and has enacted the corresponding domestic law, the “Basic Act on Ocean Policy”. This law has already stipulated the sustainable use of marine resources and so there is no need to make a new law focused only on whales. On the other hand, there is no mention of “international cooperation” and “conservation” in the “Favourite Sashimi Act”. This shows a fundamental lack of international vision and demonstrates the lack of environmental awareness of the pro-whaling politicians.

In addition – and although Japan still needs to get much better with animal welfare – we do have the “Act on Welfare and Management of Animals”, that requires the application of the “3Rs”: i.e. “Replacement, Reduction and Refinement” for animal experiments. However, the “Favourite Sashimi Act” is determined to use mainly lethal methods and does not allow for a process of examining non-lethal methods [as required by the ICJ judgement]. This law is contrary not only to international law but also, in fact, Japanese domestic law. The act also defines “scientific research of whales” in mainly lethal terms, conducted with the sole purpose of resuming commercial whaling. Japan even claims other methods do not constitute “scientific research”.

Then, the law is claimed to also be about the safety of seafarers. In fact, there have been several deaths during research whaling operations, but they were all due to accidents such as fires, or technical failures. On the other hand, approximately 60% of boating accidents in Japan that involve deaths or missing people are in the fisheries industry. The annual budget for whaling should be used for the prevention of these accidents. The bureaucrats of the Fisheries Agency and the parliamentarians are simply lying to the Japanese people when they claim that the bill is to preserve human life.

The “Favourite Sashimi Act” also stipulates the use of whale meat for school lunches. Many Japanese people already shun whale meat, with the result that much of the meat remains unsold and the ICR has incurred an excessive debt during JARPAII. The profitability of research whaling is no longer required, as this new law ensures that taxes are continuously poured into whaling. In addition, whale meat is bought up with the taxes of each municipality and children who do not have the right to choose their own food are forced to eat it primarily as a means of artificially boosting consumption. On the other hand, producers of bean sprouts and tofu, which is a much more important traditional food for ordinary people, are now going bankrupt for a lack of profitability! The Japanese government supports Kyodo Senpaku with huge amounts, while they ignore the plight of these smaller companies.

And lastly, the “Favourite Sashimi Act” is extremely detrimental to efforts to bring back a sound and sustainable fisheries industry to Japan. In 2017, the entire budget of the Fisheries Agency for resource management and research of the whole fisheries industry was only 4.6 billion yen. Yet, despite the fact that marine mammal products represent less than 0.02% of the whole fisheries output, the whaling budget is a massive 5.1 billion yen (over 45 million USD).  Half the fisheries managed by the Fisheries Agency are in a state of complete exhaustion, with threats including overfishing and poaching. Pro-whaling propaganda is used to divert the eyes of fishermen and consumers from this current perilous state of our fisheries. However, all fishermen in Japan are deprived of the necessary budget and suffer negative consequences by the fisheries administration which favours the whaling industry. The problems of Japanese fisheries will be further increased by this law.

Surprisingly, some bills which are very important to Japanese citizens, such as the bill for measures against gambling addiction; a bill for the promotion of women’s political participation and a bill for measures to prevent passive smoking, were shelved during this parliamentary term. Not so the “Favourite Sashimi Act”. Are those issues really a lower priority than “Antarctic favourite sashimi” for Japan? Not at all! This is not the opinion of most of the Japanese people, but rather, the view of many politicians and particularly, the stakeholders of the whaling industry.

Most Japanese don’t believe they need whaling in the Antarctic Ocean, and also feel suspicious about whether this truly constitutes “scientific research”. Unfortunately, this is not yet a strong enough concern to influence elections. This current indifference is used skilfully by the pro-whalers. This time, two members of the House of Councillors were at least able to represent the voice of many citizens. But it is extremely difficult for Japan to change what is clearly a deep, underlying problem.  It is important for the public – Japanese and global – not to believe the Japanese Government’s claims that the promotion of whaling is for Japan´s benefit and happens with the consent of its people.