Georgia Aquarium recently announced the pregnancy of a young beluga whale held at their facility.  Qinu, just shy of 10 years old, was born in 2008 at SeaWorld San Antonio, and is expected to give birth to her first calf in late fall.  The last beluga calf born at the Georgia Aquarium died after less than a month, and its mother, Maris, died shortly thereafter.  A previous calf born to Maris in 2012 also died after just a few short days.  These are the only recorded beluga births at the Georgia Aquarium, and sadly, neither of these two calves survived (source: Ceta-Base).

After losing a multi-year battle to import 18 wild-caught belugas from Russia (from a population now listed as depleted), the Georgia Aquarium announced last year that they would no longer take whales or dolphins from the wild.  Although this is a small step forward, reflective of growing public opposition to holding whales and dolphins in captivity, Georgia Aquarium has not committed to ending its breeding program. 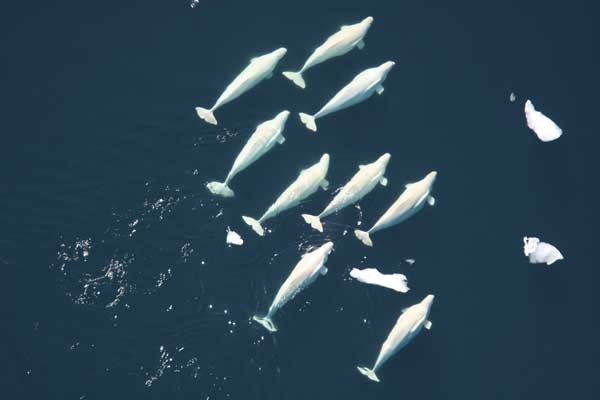 Orcas have been the primary focus of recent efforts to end captivity for whales and dolphins, but they represent just 4% of the total number of captive whales and dolphins in North America.  And although SeaWorld has committed to ending their orca breeding program, they have not made the same promise for other whales and dolphins they hold in captivity – including belugas.  By continuing their often unsuccessful efforts to breed more captive-born whales and dolphins, SeaWorld, Georgia Aquarium, and other captive facilities continue their sad legacy, condemning a whole new generation to a cruel life in captivity, where young whales will be separated from their families and forced to perform for human entertainment.  The number of recent captive beluga deaths in North American facilities – 10 deaths in the last two years alone – shows that these Arctic whales simply do not thrive in captivity.  Georgia Aquarium is ignoring the public’s demand to end captivity for whales and dolphins and placing themselves on the wrong side of history.

Even as we make progress in ending captivity for orcas and establishing the world’s first beluga sanctuary, other whales and dolphins are still exploited and forced to perform circus-like shows and live in tiny, sterile concrete tanks.  Georgia Aquarium’s announcement reminds us that the fight is far from over.  The Forgotten Whales, nearly 600 individual whales and dolphins other than orcas held captive in North America still need our help as we continue to work to end captivity for all whales and dolphins worldwide.

Update: since we posted this blog, SeaWorld announced the death of a newborn beluga at their Orlando location – another sad loss and example of why these whales simply do not thrive in captivity.