The carcasses of some of the hundreds of dead pilot whales that stranded on a New Zealand beach in recent days are being punctured in order to prevent them from exploding near volunteers helping with the operation.

Well over 300 pilot whales died last week when they stranded at Farewell Spit despite a huge rescue operation. Another eight whales stranded yesterday (Tuesday), possibly those that had already been re-floated by rescuers days before.

Heat and the gases that form inside the dead whales can cause violent explosions and so local conservation officers have been taking steps to prevent this.

The dead whales will soon be moved further up the bay, which is on the tip of New Zealand’s South Island, to a location in the nature reserve that’s not open to the public.

Find out more about strandings and how to help WDC. 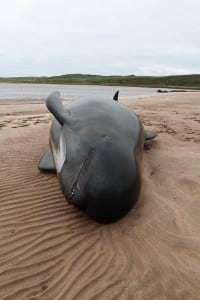