Like most of the Moray Firth in Scotland, the WDC Shorewatch site at Nairn is stunning. We were enjoying the views over the sandy beach and across 5 miles of sea to the entrance of the Cromarty Firth, hoping to catch a glimpse of the world famous Moray Firth dolphins, or maybe a whale, when ‘Baldie man’ appeared. He’s a keen Shorewatcher from Aberdeen and has a habit of being where the action is. The last time I saw him we were watching humpback whales from Aberdeen beach so I was now expecting some whale or dolphin action.

Right on cue, a couple of dolphins appeared and then a few seconds later a few more. But, uh oh, they were on the beach…yikes. We sprang into action.

As we got closer, Nairn beach was covered in people. It was like Brighton beach in the summer! There were drones flying above, cameras with humongous lenses, signs, drums banging, dogs everywhere and the dolphins were…..what? Surely not walking?! Well would you believe it, it was humans … in dolphin suits?! My word, humans really are silly sometimes and they really had me worried for a minute!

There were 500 people there. We all listened to some very nice humans called Cromarty Rising who told us about some other men in suits called Cromarty Firth Port Authority (CFPA). It turns out that I was right to be worried for the Moray Firth dolphins after all. 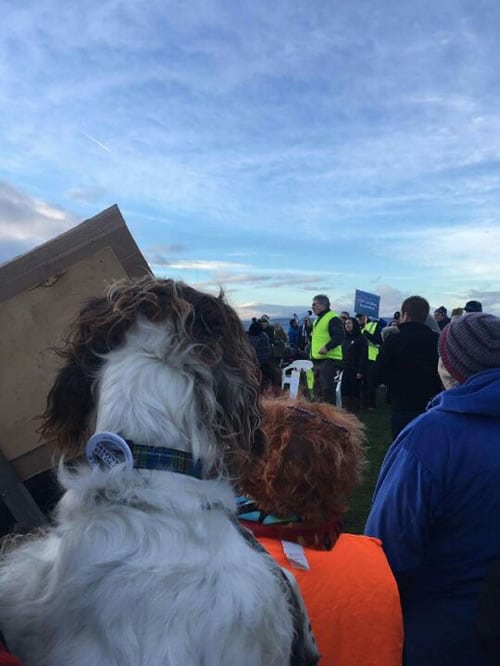 The CFPA want to transfer oil from a ship to another ship, right in front of Nairn, in the middle of the Special Area of Conservation for the world famous Moray Firth dolphins. Now that’s just plain daft, isn’t it? Well, if you’re still not convinced then what if I told you that potentially up to 48 transfers may be made during the better weather i.e. 10 transfers per month during peak tourist season and peak densities of dolphin activity?

Now most people think us Springers are crazy or daft but these men in suits seem to be even sillier than the ones in the dolphin suits.

These businessmen want to make money so let’s look at money and forget the precious wildlife for one second. Apparently the CFPA will make £500,000 per year for these transfers. Not bad but tourism directly related to the dolphins brings in at least £3,000,000 per year. The biggest industry for our region is tourism. Why risk losing all that money each year? One assessment valued tourism relating to the ecosystem being worth £264,000,000 to the region. With such a huge amount of money to the Moray Firth’s economy at stake, isn’t it strange that nobody even bothered consulting anyone who lives on the Moray Firth over these proposals? 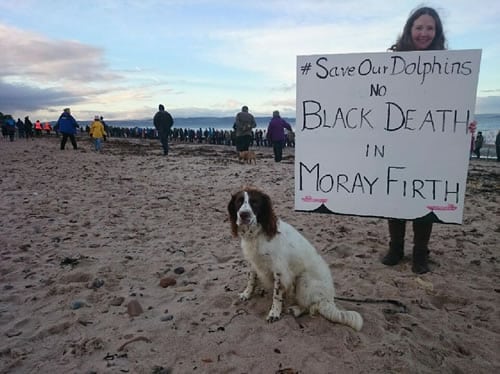 The CFPA also wrote a glossy brochure that tells the other humans that they’ve carried out 250 ship to ship oil transfers safely without incident. This statement is true but like a lot of glossy brochures it conveniently missed a little bit. A big bit. A very great big bit actually. These transfers were all carried out at a place called Nigg Jetty which is located inside the Cromarty Firth, out of the worst of the Scottish weather and out of view from the Moray coastline. The reason that the men in suits have made an application is because their proposal is to do something different. They want to make the transfers of oil out in the middle of the sea in the Moray Firth, right where the highest concentrations of the dolphins are observed. I wonder how they’d like it if I went to the middle of where they live and did my transfers where they eat, play and breed?

At Nigg the ships dock to a jetty. In the new application they’re only at anchor and will move around like my ears in the wind and the strong tidal flows, making it a bit tricky for the workers to keep those hoses full of precious oil connected.

At Nigg they have a facility to sterilise the ballast water of non-native species whereas there’s nothing available at the new location. That could be very bad news for the local fishing industry.

Stinky volatile organic compounds (VOCs) will be released into the air. Not great for the local humans or the whales and dolphins.

A 500m exclusion zone will be imposed around the ships during transfers which will be fun for the cruise ships coming in and out of the Port, as well as fishing vessels and any other boats using the area. The ships used for oil transfers are enormous, this may even mean that recreational boats for wildlife watching or monitoring of bottlenose dolphins (as required under the EU Habitats Directive) might be excluded from the area.

Apparently the CFPA are actually planning to increase the number of cruise ships docking at the Port to boost tourism for the region. At last a good idea but the increased traffic during the short tourist season coincides with the time of the oil transfers taking  place.

So here’s your ingredients list: More big cruise ships, strong tidal flows, Scottish weather, more and larger oil tankers, more tugs, the transfer of millions of litres of oil. Throw all this into a Special Area of Conservation. Add dolphins, a few tonnes of ballast water with a hint of non-native species, all served up under flags of convenience. What could possibly go wrong? Ah but it’s all ok. The men in suits tell us everything will be fine…..but just you remember they don’t tell us everything! 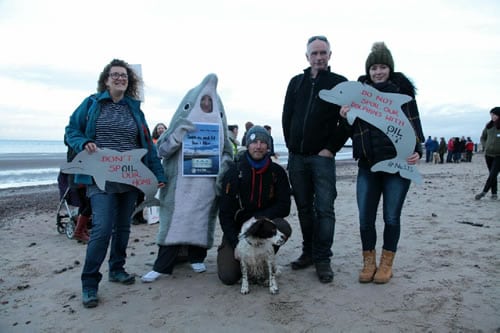 We really need to stop this from going ahead. The WDC Shorewatchers amongst many others and especially Cromarty Rising are doing their best to tell the decision makers that this is the ‘wrong plan in the wrong place’.

My human has written to his MP, Angus Robertson. He hopes that Angus will speak on his behalf to the man who makes the final decision, the Transport Minister Chris Grayling in Westminster, England. Apparently, Angus is still sat on the fence after a whole year which must be painful. I’m not sure which fence it is but I hope it’s not one of those spiky ones. Maybe if enough people write to him to tell him their thoughts we can get him off of the fence before he needs a new suit.

If you want to help the Moray Firth dolphins, the world’s largest bottlenose dolphins, then please ‘Like’ and Follow ‘Cromarty Rising’ on BookFace or www.cromartyrising.com. They have a panel of experts who are researching, campaigning and fighting this very, very silly idea on behalf of everyone and the whole area. On their page you can learn all about the application and you’ll receive regular updates on progress.

Thank you so much for reading,