In 2016, the responsible whale watching program Whale SENSE Atlantic hit two records: the highest number of participants (16) and the most large whale entanglements documented by participants (13). The most recent entanglement was reported by American Princess Cruises out of New York City on December 4, and involved a critically endangered right whale.

“This was our first ever sighting of a right whale on one of our trips,” says Frank DeSantis, owner and captain with American Princess Cruises, “and while we were devastated to learn that it was entangled, we felt fortunate to be able to document its condition and report it in to the authorities.”

Whale SENSE Atlantic is a voluntary program for responsible whale watching offered to commercial whale watch companies from Maine through Virginia. The program, founded by the NOAA Fisheries and Whale and Dolphin Conservation (WDC) in 2009, plays a key role in the conservation and welfare of large whales in the North Atlantic.

“The role of our Whale SENSE partners is more important than ever, as the number of whale entanglements they reported nearly doubled from 7 cases in 2015 to 13 in 2016,” says Dave Gouveia, protected species monitoring coordinator for NOAA Fisheries Greater Atlantic Region. “In several of the reported entanglements, the whale watch vessels were able to stay with the entangled whales until disentanglement teams were deployed, which is essential to the teams being able to find the whale.” 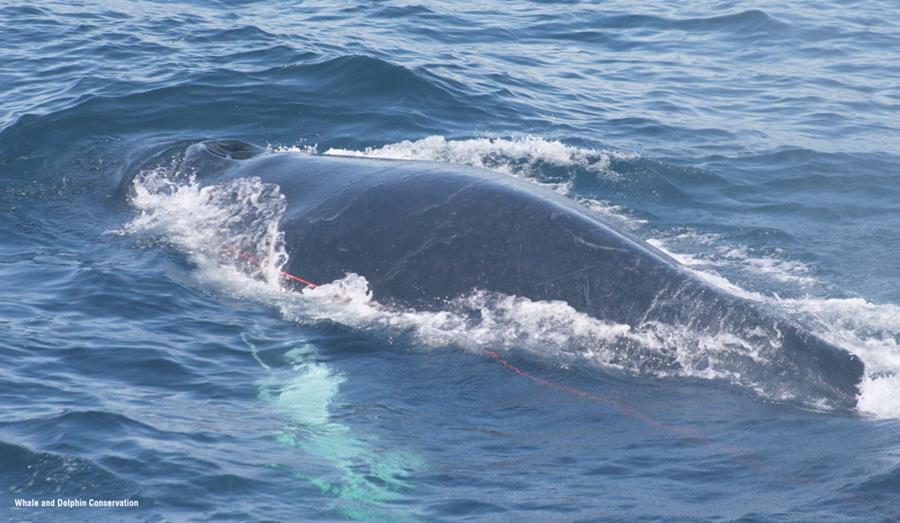 “We have the opportunity to reach thousands of people each year, to not only show them members of endangered whale populations, but to make sure they understand that everyone plays a role in their conservation,” says Zack Klyver with Bar Harbor Whale Watch Company, program participants since 2012. “Everyone can recycle to reduce the plastic debris in the ocean, everyone can limit their energy use by shutting down electronics, and consumers can make informed and responsible decisions about their seafood purchases.”

Whale SENSE participants, along with NOAA Fisheries and WDC, received an Environmental Merit Award from the Environmental Protection Agency on behalf of the program in May.

“We are thrilled and humbled that the EPA acknowledged the great work of our participants, and plan to continue enhancing the program moving forward so we can reach even more whale watch passengers with these conservation messages,” says Monica Pepe of Whale and Dolphin Conservation.

For most whale watching operators, it was a banner year for whale sightings. Humpback whales in the Gulf of Maine were easy to find, and from June through October passengers were often able to witness the whales, sometimes in large groups, feeding on a large abundance of sand lance, a favorite prey. Along the mid-Atlantic, many humpback whales were seen in coastal waters, demonstrating to passengers that humans and the oceans are inextricably interconnected. The whales’ close proximity to shore helps to drive the point home that actions taken on land can quickly impact these majestic creatures.

Although whale watching in the Northeast has ended for the year, whale watching season is just beginning in Virginia Beach, where whales are often seen as they migrate from northern summer feeding grounds to southern winter breeding grounds. Two Whale SENSE participants, Rudee Tours and Virginia Aquarium & Marine Science Center, are starting their seasons ahead of schedule due to the early arrival of whales off the Virginia coast.

“The early return of our annual visitors gives us a unique opportunity to share our scientific research and conservation efforts with even more guests during their Sea Adventures,” says Alexis Rabon, lead naturalist and boat programs coordinator with the Virginia Aquarium & Marine Science Center. “We appreciate the Whale SENSE program, and the accreditation provides that extra layer of certainty that our guests will get an incredible, thoughtful and well-designed trip full of education and excitement.”