Research has shown that the survival of the Southern Resident orcas is closely linked to salmon populations in the Pacific Northwest of Canada and the US.  We have established, earlier in this campaign and in previous efforts, that these orcas are incredibly dependent on salmon, especially Chinook – up to 80% of their diet.  But Chinook have been declining in the Northwest for decades, and recovery efforts to date – much like the efforts for Southern Resident orcas – have not been enough.  We need bold and decisive actions to save salmon and the Southern Residents from extinction.  Today’s #MigrationNation post features a salmon expert’s point of view on Columbia Basin salmon, and why removing the Lower Snake River dams is not only the best action we can take to help salmon (and orca) populations, but is also a chance for the greatest river restoration in history.

Thanks to Tom Stuart (Idaho River United, Save our wild Salmon) for this week’s contribution – read about the history of salmon in the Pacific Northwest, and then join the #MigrationNation! Sign our letter to Federal Agencies demanding the removal of the four Lower Snake River dams to help the Snake River, its salmon, and the orcas that depend on it. 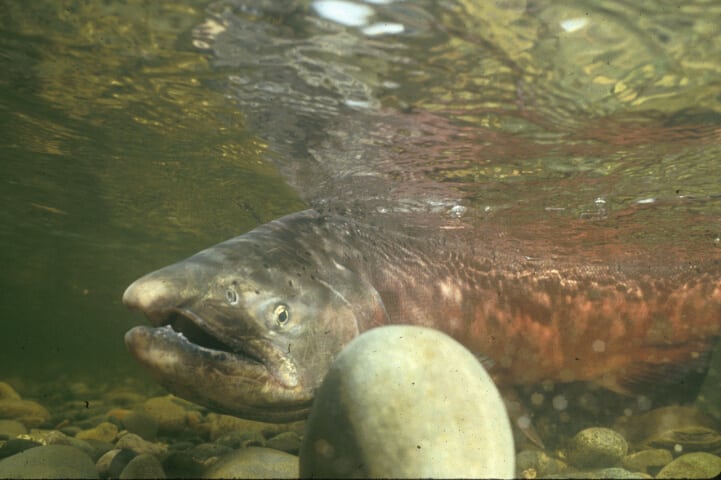 The Columbia River was once the most prolific producer of salmon on Earth.  Some 10-16 million adult salmon returned annually to the watershed, spread across all seasons (1).  A typical year began with spring chinook salmon in huge numbers, quickly followed by even larger numbers of summer chinook and sockeye.  Fall chinook, coho, and steelhead came last, with steelhead continuing to move upriver throughout winter months (2).  Many early European explorers wrote of unbelievable salmon numbers, describing noisy, frothing rivers, and tributaries so full of salmon it appeared one might walk across on their backs.

The largest mass salmon migration came in spring and early summer; ‘June hogs’ weighing as much as 100 pounds were legendary (3).  In this massive salmon run, spring & summer chinook from the Snake River were the most prolific, comprising over 50% of all chinook and steelhead in the entire Columbia basin (4). Two tributaries were special – Idaho’s Salmon and Clearwater Rivers. Idaho’s Salmon River alone produced 40% of the spring/summer chinook in the entire Columbia system; locals called it a “mother lode” for salmon.

By 1860, salmon canneries on the lower Columbia had begun to seriously deplete salmon runs.  Fish traps and ‘fish wheels’ were particularly lethal.  President Teddy Roosevelt reported in 1908 that overfishing in the Columbia was putting salmon runs at risk (5).  Soon after, the State of Oregon imposed new restrictions on salmon fishing, and populations stabilized for a few decades in the 1-3 million range (6).

Starting in the mid-1930s, the Columbia Basin experienced a surge of dam-building unlike any the world had ever seen, with severe salmon impacts.  Over the next 40 years, an average of 1 dam per month was built.  By 1975, when the last was completed on the lower Snake River, over 400 dams had converted a roaring Columbia watershed filled with salmon into a series of slackwater reservoirs with only remnant populations surviving (7). Salmon paid a price for each new dam, as cumulative impacts piled up. 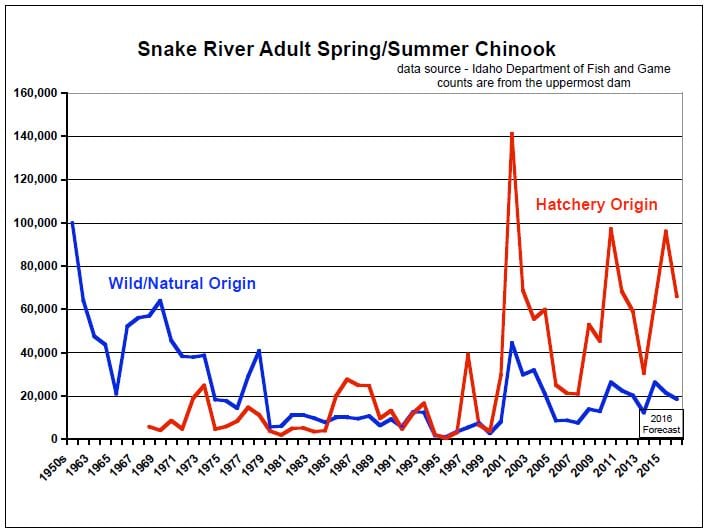 Snake River salmon crashed precipitously when the last four dams were completed, even in the most productive watersheds like Idaho’s Salmon River.  These particularly robust salmon had been able to sustain themselves with a few dams, but the cumulative impact of eight was too much.  By the 1990s, all wild Snake River salmon were listed as threatened or endangered under the federal Endangered Species Act (ESA). Today, even after 20+ years of court-monitored salmon policy and ESA-driven federal actions, these essential salmon populations have not rebounded significantly.  Salmon advocates in Idaho and orca supporters throughout the Northwest are rightly alarmed.  Entire inland ecosystems, and the health of orcas offshore, are at risk because of misplaced federal priorities, and federal agencies protecting four dams that we can easily live without.  Remember, we are talking about only four dams, out of over 400.

The Snake River basin today comprises an estimated 70% of the Columbia basin’s salmon recovery potential (8).  And we know that orcas are starving. So, if we are serious about saving orcas, we must restore Columbia Basin salmon, and to do that, we must restore the Snake River’s salmon runs.  This can only occur if the four lower Snake dams are removed.  Otherwise, survival rates of all Snake River salmon stocks, both wild and hatchery fish, remain too low to allow salmon runs to replace themselves (9), much less provide a food source for starving orcas.

The Snake River basin offers the best salmon recovery opportunity in history. Over 4.5 million acres in central Idaho are protected in federally designated Wilderness areas, along with thousands of miles of protected salmon habitat, some designated Wild and Scenic Rivers. All this excellent salmon habitat is vastly underutilized now.  Think of a 1000-room luxury hotel, with the ‘vacancy’ light flashing for salmon.  This ‘Noah’s Arc for salmon’ can become productive again – if we remove the migratory bottleneck – four low-value dams.

We can easily live without the four lower Snake River dams.  Let’s remove them ASAP – and restore orcas, along with vast wild salmon runs – for our kids and grandkids. 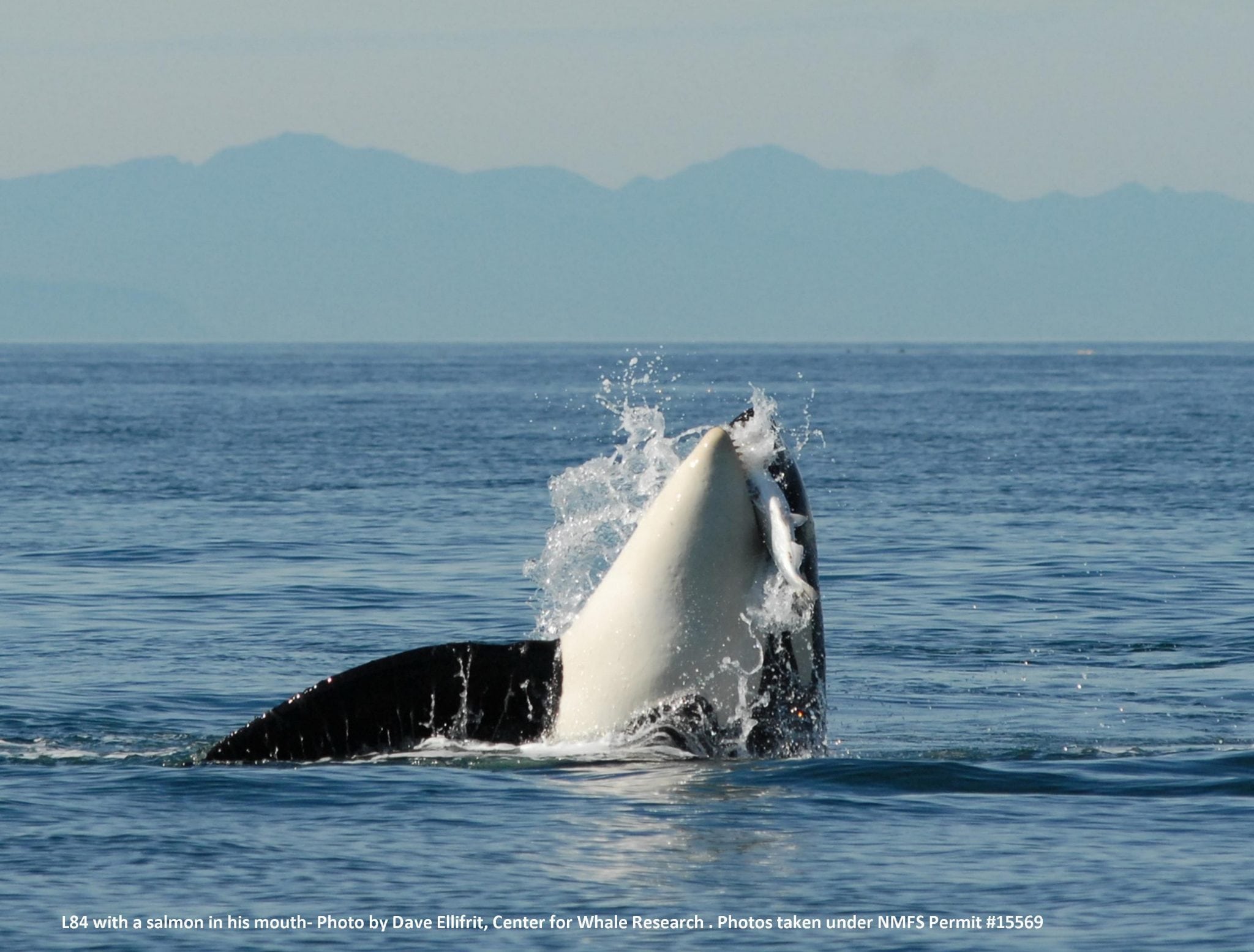 4: Idaho Dept of Fish and Game

8: Idaho Dept of Fish and Game

Tom Stuart has been an active volunteer and spokesman in Northwest/Idaho salmon and steelhead recovery work since 1990 in state, regional, and national efforts. He serves on the Board of Idaho Rivers United (IRU, www.idahorivers.org), and is currently Board Chairman of the Save Our wild Salmon Coalition (SOS, www.wildsalmon.org). SOS   represents 50 fishing, conservation, energy, and taxpayer groups with a total of 6 million members nationwide.  SOS focuses on public education, advocacy, and when necessary, litigation to improve survival of Snake/Columbia River salmon through eight federal dams and reservoirs on the Snake and Columbia Rivers.  SOS supports removing the four low-value, high cost dams on the lower Snake River.  Tom is also active in the Northwest Energy Coalition, American Rivers, National Wildlife Federation, Trout Unlimited, and the Northwest Sportfishing Industry Association.

Tom is a retired US Air Force officer, aviator, and centralIdahobusinessman.  Education includes Bachelor’s Degrees from the USAF Academy in Physics and History, and graduate work at Boise State University in Business and Teacher Education.   He lives in Boise, Idaho with spouse Anne Pasley-Stuart.