As WDC’s office in North America enjoys the Thanksgiving holiday season with family and friends, we would like to take some time to honor the members of the critically endangered Southern Resident orca community who were lost this year.  Southern Resident orcas are incredibly social and family-oriented, and most offspring, both male and female, stay with or very close to their mother for their entire lives.  This community of orcas is matriarchal, which means that groups are led by the elder females.  Granny (J2), is not only the oldest Southern Resident, but also the oldest known orca in the world.  It’s estimated that she’s been leading her family through the waters of the North Pacific for over 100 years.  This year, Granny and the Southern Residents lost four very important individuals, and we are sharing the stories of their loss below, including a touching tribute from Ken Balcomb of the Center for Whale Research.

You can help this critically endangered orca population by signing our letter demanding the removal of four dams on the Lower Snake River.  Join our #MigrationNation to restore salmon and rebuild this critical food supply for the Southern Resident orcas.

A member of L pod, Nigel (L95) was born in 1996 and was just twenty years old when he was found dead in March of this year.  A necropsy indicated that he was suffering from a fungal infection, likely linked to a tag recently applied by the National Marine Fisheries Service in an ongoing effort to determine the extent of the Southern Residents’ winter range.  Male orcas start to reach physical maturity in their mid-teens, and research on paternity in this group has shown that older males father more calves.  At twenty, Nigel was just about to become an important male to the community as he reached sexual maturity.

As a J pod matriarch, 42-year-old Samish (J14), was the leader of her small family and held important knowledge about her home range and the culture of her community.  Her family was particularly important to the Samish Nation, and all of her offspring were given names from the tribe in traditional potlatch ceremonies.

The most recent loss to the Southern Resident orca population is a double heartbreak.  To tell their story, we are sharing a touching obituary from Ken Balcomb, the Founder and Senior Scientist of the Center for Whale Research.

J28 was born in mid-winter 1992/93 in or near Puget Sound Washington, and was the first of four known calves born to J17 in the J9/J5 lineage of southern resident killer whales (SRKW – see family tree) inhabiting the inshore marine waters of the Pacific Northwest. The iconic and world-famous J1, first SRKW ever to be photo-identified, was her father. Photographs of J28 that were taken in the summer of 1993 by Center for Whale Research staff and Earthwatch volunteers show that she was a healthy and vigorous ‘calf’’ among six new calves born that year into the SRKW population.  In late autumn 2002, when J28 was nine years old she acquired a small nick in the trailing edge of her dorsal fin that made her easily identifiable to whale-watchers and the general public, and she became one of the darlings for a growing fan club of humans that were beginning to raise concerns that this iconic population was precipitously declining from around 100 in 1995 to around 80 in 2003. The SRKW population was declared Endangered under the US Endangered Species Act in 2005, and earlier this year it was listed as a “species in the spotlight” by NOAA for its lack of recovery since then.

Sexual maturity for these immensely popular neighbor animals is typically attained in the early to mid teens, and J28 had her first known calf, a daughter J46, in November 2009 when she was sixteen years old. Gestation is approximately 17 months, so we can estimate that J28 became pregnant at age fourteen and a half. In January 2013 (three years after the birth of J46), a freshly dead neonate calf was found on Dungeness Spit and identified from DNA as belonging to J28 with the father most likely to have been L41. The dead calf was not given an alpha-numeric designation because it had not been documented alive. She subsequently (23 months after the dead calf) had her second live-born calf, a son J54, in December 2015 at the tail end of a so-called “Baby Boom” of 2014/15. Regrettably now that mom has died, he will not survive and may already be dead, along with two other “boomers” (J55 and L120).

J28 was noted to be losing body condition in January 2016, presumably from birthing complications, and by July was clearly emaciated. If her carcass is ever found an examination of her ovaries may reveal how many ovulations/pregnancies she actually had, as well as her proximate cause of death (probably septicemia). We estimate that she died in the Strait of Juan de Fuca sometime between 16 and 18 October, prior to her first noted absence on 19 October.

J28 is survived by her Mother, (J17) two sisters (J35 and J53), a brother (J44), a daughter (J46), and a nephew (J47).  Her daughter and her oldest sister (J35) are attempting to care for the orphaned calf, but at ten months of age he is too young to survive without mother’s milk supplement, and he has gone too long with inadequate nutrition.  No other lactating females have adopted him and his grandmother is too occupied raising her own newest calf (J53, born in October last year) to care for him. His sister, J46, had been catching and offering salmon to her mother and little brother for several months while mom was ill, but that was simply not enough nutrition provided to three whales by one little female no matter how hard she tried. The family requests that in lieu of sending flowers and cake*, well-wishers please send more wild Chinook salmon to and from Pacific Northwest rivers.

Reproductive issues for southern resident killer whales are prevalent in recent decades, and there has been considerable research into their probable cause. By simply glancing at the family tree one can see that there is a huge problem, particularly with L pod that has a more coastal foraging distribution. Entire matrilines are dying out, and young productive mothers are dying faster than they are being replaced by maturing individuals. The miscarriage rate is well over 50% of pregnancies. These are facts that cannot be ignored if we are to “Save the Whales.”

The total number of whales in the SRKW population as of this press release on 28 October 2016 is estimated to be 80, with the loss of both J28 and J54 and the mid-summer loss of J14, a 42 year-old female. We have seen virtually no growth in this population in twenty years in spite of large amounts of money spent to study and ‘recover’ them. The important statistic, however, is not simply the total population size but the number of breeding age females in the population and the number of viable calves they produce each year, together with their survival. Very early in our study we observed that a healthy female could produce a viable calf at three-year intervals, and the average calving interval was five years. With approximately thirty reproductive age females in the SRKW population this would mean that on average there would be five to ten viable calves produced each year. In spite of recent “baby boom” hyperbole, this is clearly not happening – the viable calf production is more like an average of three per year for the past twenty years. We knew that calf survival is not guaranteed – early calculations suggested 43% neonate mortality – that is on average 43% of calves die in their first half year of life (the reciprocal is that 57% of calves survive to six months of age). Survival of newborn calves in some years is better than in other years, presumably due to the nutritional condition of the mother and the energetic expense of nursing the baby for almost a year (more food required – nursing is more energetically expensive than gestation). Juvenile survival (age .5 to 15.5 years) has been calculated to be 76% – that is, a surviving post-neonatal calf has a three in four chance of surviving to maturity and recruiting to the breeding population. With such an overall slow population growth rate, this is how a predator population keeps in balance with its food supply – don’t overproduce in the available carrying capacity of prey.

All of the above simplified number crunching presumes that human societies have no effect on what is happening with killer whale natural history and their predator/prey relationship. But, we have thrown a couple of monkey-wrenches into this scenario:

1) We have introduced legacy contaminants into the natural ecosystem that have known adverse health effects on all animal life, including our own. And, we know that the whales have bio-accumulated these contaminants to unsafe levels in their blubber.

And, 2) We have drastically altered the availability of the food supply – preponderantly Chinook salmon – both in abundance/biomass and seasonal distribution. These two wrenches work in tandem to have a profound effect on the SRKW population.

When there isn’t enough food to support gestation or lactation whales metabolize their blubber supply for energetic needs. Their own blubber is now actually toxic to them, and when metabolized and circulated in the blood stream it causes reproductive malfunction, immune-suppression, and nervous system impairment. If a pregnant female gets in this malnourished and poisonous situation it can affect the development and survival of the fetus as well as her own health. If the calf is born alive, the contaminants go directly from the mother’s milk to the nursing calf, creating another set of developmental problems. We have seen multiple instances of this in the past: J28 and her calves provide recent evidence, J32 and her necropsy provide evidence, L60 and L51 and their necropsies provide past evidence; and, we will see more of this evidence in the future until we dramatically increase the abundance/biomass of the whales’ primary food supply (Chinook salmon) and its year-round availability to the whales. 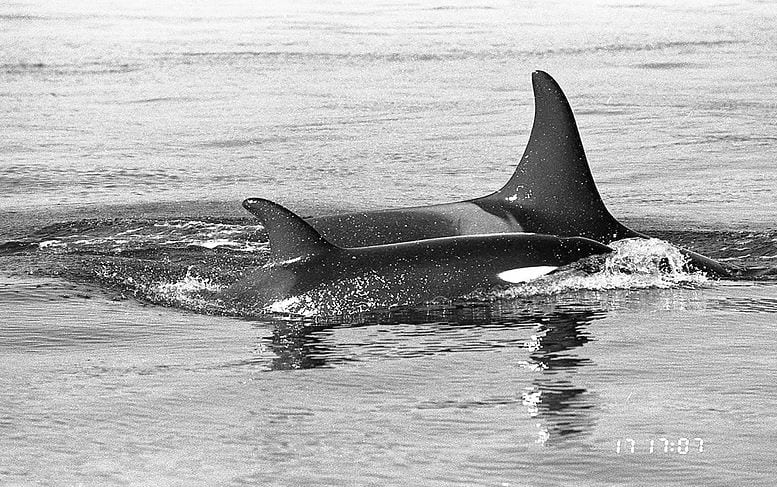 Help WDC fight to restore salmon in the Snake River and help the Southern Resident orcas.  Join our #MigrationNation to be their voice and demand action by the Federal Agencies to remove dams and help salmon!

(* “Cake” refers to a statement made by the pre-eminent dam builder in the pork-barrel era of dam construction, Floyd Dominy, Director of the Bureau of Reclamation: “they can eat cake” he said to fishermen who complained of salmon loss that would inevitably follow due to dam construction on salmon-spawning rivers)