So Denmark has submitted its opening statement to the IWC and I guess the question is, have they learned their lesson since the last meeting? One reading of the statement would suggest that Denmark wants to ‘have their cake’, and, as the old saying goes, quite literally, ‘eat it’. 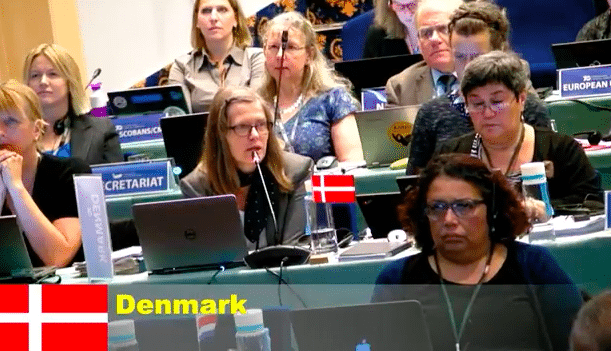 I asked in a previous post whether the Kingdom of Denmark as a ‘Kingdom divided’ was able to comply with its commitments to the EU whilst holding off the pressure from its whalers? It would seem that from this opening statement Denmark is planning a ‘nod towards the EU’  whilst keeping its fingers tightly crossed behind its back.

The opening statement should be read carefully. You will see that in its final paragraph Denmark has reverted to again being the child in the playground that is threatening to not only hold onto the ball unless everyone plays the game it wants but states it’s ‘going to puncture the ball so no one else can play unless it gets its way.’

Just like the child who cried wolf too many times, Denmark again threatens to leave the IWC if its does not get its way.

This threat is aimed squarely at the EU.  Denmark knows it has previously been able to tie the internal EU negotiating process into knots with such threats, but things can change; people can grow tired of the errant partner that threatens and demands too much and their bluff can be called when all their political capital has been extinguished.

From its recent behaviour at Whaling Commission meetings we should not be surprised to see that Denmark claims that ‘The Kingdom of Denmark supports the sustainable use of all living marine resources’. This is despite the fact that under EU law all cetaceans are strictly protected. So how can Denmark take such a position?

Well, it can’t actually, not legally. It can represent Greenland and the Faroese whilst at the IWC with respect only to Aboriginal Subsistance Whaling (ASW) issues, but in terms of being supportive of utilising whales as ‘Denmark’ it is a member of the EU and this statement places it dramatically out of sync with EU law.

Furthermore, Denmark trumpets the ‘failure of the IWC to effectively manage its ASW obligations prior to IWC-65’, whilst failing to mention that it was itself Denmark, in its headlong rush to deliver Greenland’s political grab for extra whales, who triggered the situation on which the EU voted against its excessive demands for more and more whales. This was the same year that Denmark’s IWC Commissioner, Ole Samsing said, “There are no rules and regulation within the IWC as to the humanity of the hunt in aboriginal society. If you can catch a whale with a baseball bat, then you are allowed to do that”.

Seeing Denmark’s opening statement it makes me ask again how complicit is Denmark in helping Japan achieve its ambition to resume commercial whaling? Indeed, Denmark’s unwavering support of Greenland’s definition of local consumption when it comes to selling whale meat to tourists squarely aligns with Japan’s ambitions. But maybe its naiveté rather than complicity; I live in hope.

I would urge the IWC members to look carefully at the contents of the ASW expert working group that Denmark urges the IWC to accept in its entirety. ‘We welcome the outcome of the Maniitsoq expert workshop in 2015 and urge all IWC parties to actively contribute to ensuring follow up in an effective and constructive forward-looking manner’.

One reading of the working group report suggests that it effectively removes legitimate control of future ASW from the competency of the IWC Plenary and leaves it only the role of ‘rubber-stamping’ future, increasing, demands of the ASW whalers.

There are some interesting ideas in the report, but it’s not the simple answer to the future of managing aboriginal subsistence whaling by the IWC. Indeed, poorly handled, the report is possibly the quickest path to delivering commercial whaling in the ASW countries as well as expediting Japanese commercial whaling.

So no, please don’t follow Denmark’s recommendations on this – that way lays nightmares for the world’s whales and an impotent IWC.