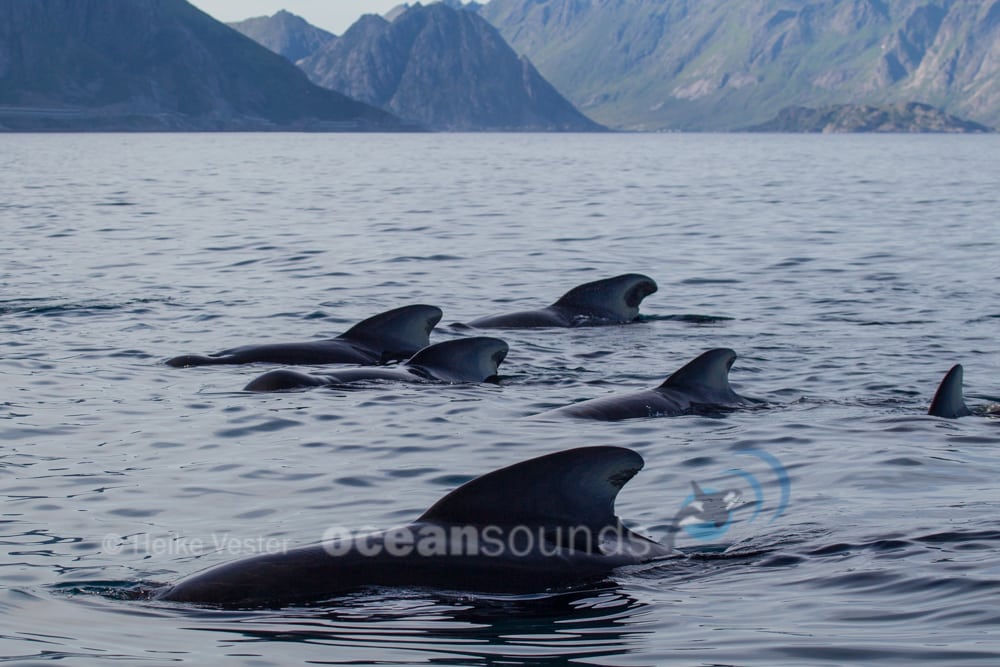 I am delighted to introduce biologist and founder of Ocean Sounds, Heike Vester.  Ocean Sounds is a voluntary organisation working to protect whales and dolphins via acoustic research, education and art projects. Below, Heike presents her experiences studying whales in Norwegian waters, and outlines some of the challenges both she and the whales currently face. Heike’s primary concern is that Norway’s government doesn’t sufficiently protect marine mammals in its waters.   In most cases, Norway exempts itself from following international laws which safeguard cetaceans and instead passes its own rules and regulations, which either ignores marine mammals or treat them merely as resources to be exploited. Here she tells her story.

Whales crowded out by vessels

I started my research in Norway 13 years ago as a naïve field biologist who wanted to study the natural behaviour of whales. In other words, I wanted to get a boat and go out to  sea, find the whales and study who they are, what they do and most of all, how they communicate. Back in 2003, I studied orcas at Tysfjord in northern Norway, assisting other scientists and whale watching companies. With few boats around at the time, we often found the whales feeding alone in a beautiful fjord, which was a perfect location to study their natural behaviour! But quickly word went around and existing whale watching businesses expanded, new ones started up and it became more difficult to find the whales without them being surrounded by boats.

Then in 2007, the whales disappeared from the Tysfjord following a change in herring migration and they are currently concentrated during the winter months in the fjords between Andøya and Tromsø. Sadly, in what looks like a re-run of the situation at Tysfjord, the number of boats has exploded in recent years. In the absence of government regulations or permits, numerous film crews and photographers from all over the world now crowd the fjords, together with fishermen, whale watching companies, private boats and researchers. This winter, the number of boats concentrated in this area might exceed one hundred. 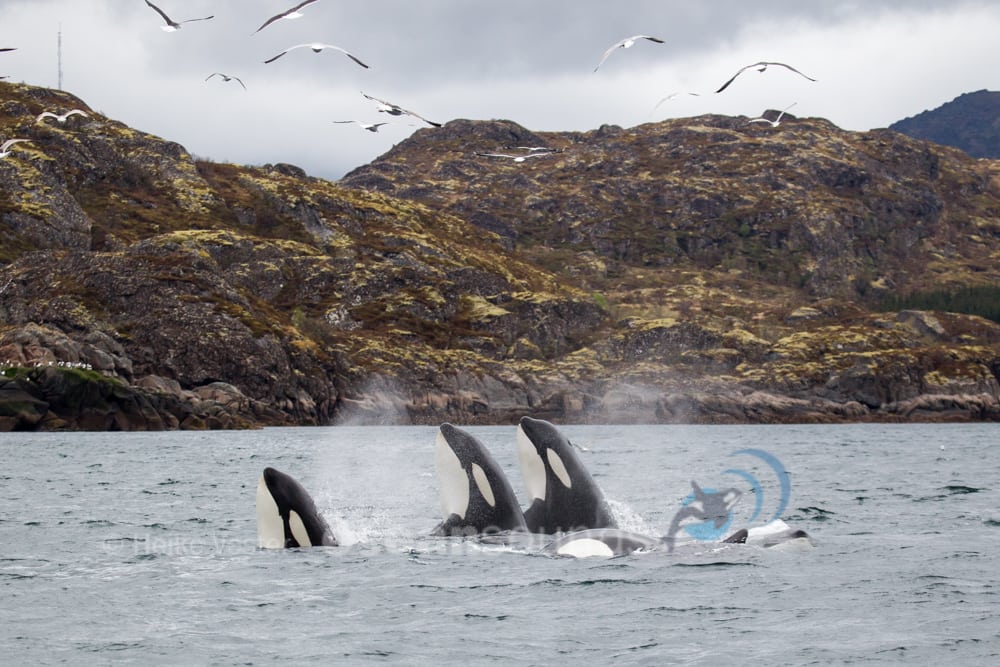 This year, I could only witness boat noise and the sad spectacle of orcas trying to get away from the boats.  As quickly as  one boat left, another one would replace it. The whales were obviously annoyed and tried to escape the vessels by  changing their course or diving for a long time. Not only were there fewer sightings of orca groups, but boat noise and the whales’ avoidance behaviour meant that I could not study their natural behaviour or communication. 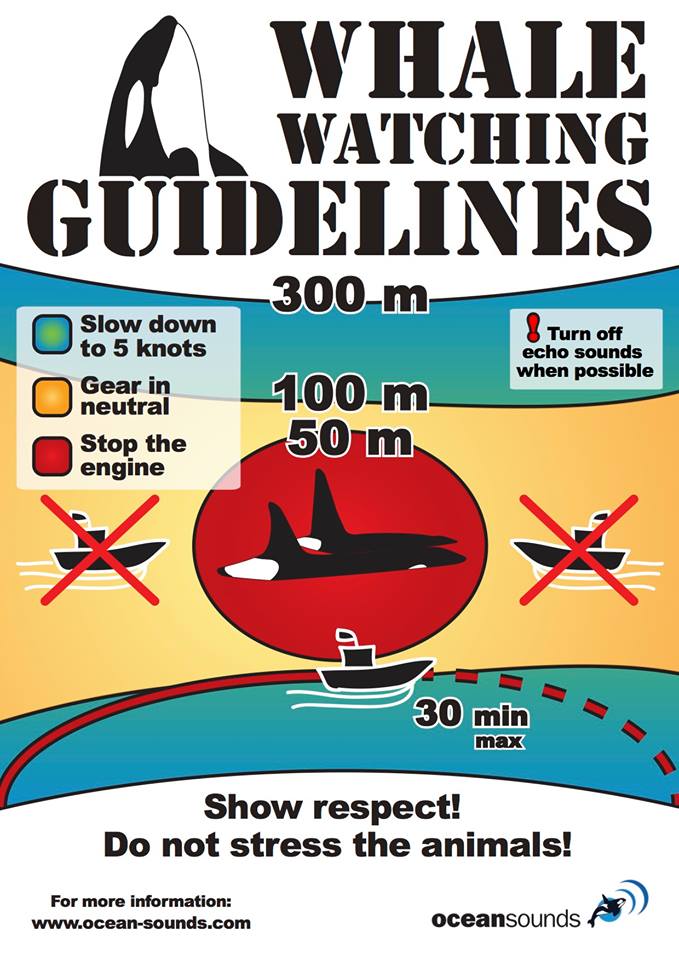 In the absence of official regulations, our response has been to reach out and educate vessel users. We drafted the above guidelines asking people to slow down and  also encourage people to watch the whales from land. This is really easy to do from Lofoten and is a particularly gentle and non-intrusive way to watch orcas since they come so close to the shore and can sometimes be seen for hours! 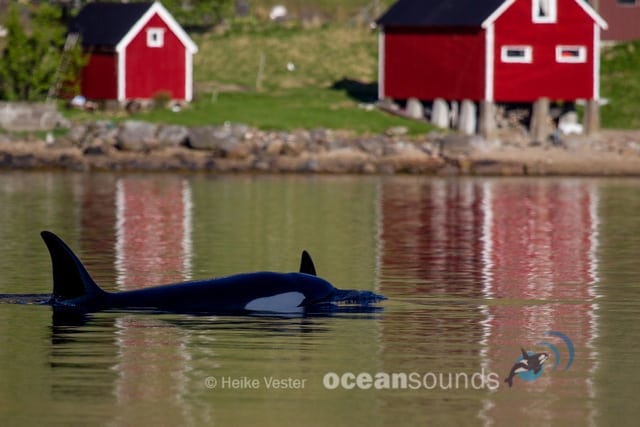 I am also really pleased that our guidelines were used as a basis for the development of more detailed guidelines for Northern Norway. Whilst our aim will be to achieve formal regulations, we hope that these guidelines can provide a good example of best practice for vessel users in the meantime.

When I started Ocean Sounds in 2005 in Henningsvaer, I was fully aware that my presence would add to   controversy on the whaling issue. However, things started well enough and I managed to develop a personal communication with ex-whalers, but the situation became increasingly hostile once the current whalers opened a whale meat processing in Henningsvaer. Norway flouts international law banning commercial whaling and instead, allows minke whales to be hunted in its territorial waters. This year, there weren’t many minke whales in the Vestfjord, yet the area was crowded with whaling vessels searching in vain for whales and many whalers had to go as far as Svalbard in order to meet their quotas.

‘Acoustic wall’ scares off the whales 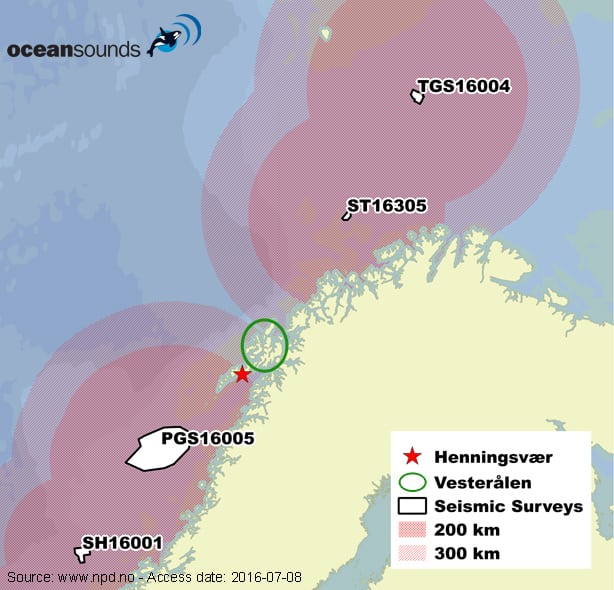 The Norwegian Petroleum Department is conducting seismic surveys for oil and gas along the Norwegian coast. They claim to follow Norwegian rules, but don’t explicitly mention marine mammals and any necessary precautions. Further, they are not required to have trained observers on board and even if they encounter marine mammals, they are not required to pause their operations. Again, Norway is exempting itself from international laws and instead, creating its own.

Sporadically since 2012, I’ve been able to detect the sounds of seismic surveys inside the Vestfjord but this year, continuous surveys have been conducted closer to the protected Lofoten islands than previous years, blocking the entrance to the Vestfjord with an “acoustic wall”. Rather than whale song, seismic blasts every 8 seconds have been the dominant sound source in the Vestfjord! There has been a significant decline in whale abundance and we suspect that the whales are actively avoiding the area.

For the first time since 2007, we could not find pilot whales in great numbers, nor the single humpbacks and fin whales that entered the fjord on their northward migration to their feeding grounds – even the minke whales were rare this year! Orcas were seen in southern Lofoten close to land but not in the northern part, as they have been in previous years and their numbers were well down.

Every May, since 2007, we’ve documented huge groups of pilot whales (sometimes numbering over 200, including many newborns) coming into the Vestfjord to meet, find mates and feed on squid. They could be observed all summer, with some groups staying longer than others.  We saw these same groups and individuals year after year, but this year, the pilot whales did not come into the Vestfjord. 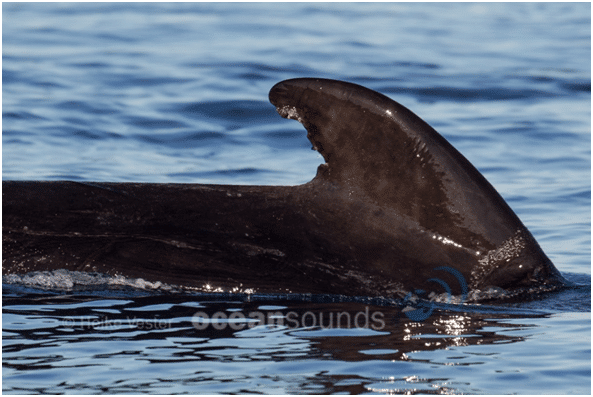 Finally in July, we found 2 groups of pilot whales which turned out to be A clan and B clan.  NPW-A-07 (pictured above), the old male from the A clan, is especially easy to recognize (see picture). However, we saw them only 3 times and after that, the fjord became quiet again – except for the booming noise of the seismic surveys that blasted their energy into the sea every 8 seconds, day and night.

A week ago, a rare beaked whale swam into a bay south of Bodø where it stranded and died. A necropsy was unable to reveal the cause of death, but it appeared to have been a healthy sub-adult Sowerby’s beaked whale. This species is rarely seen because it is found in deeper water and feeds on fish at a depth of up to 700m. Beaked whales are vulnerable to the effects of strong noise disturbance such as military sonar and seismic surveys. We suspect that this unfortunate whale crossed the path of a nearby seismic survey vessel. The intense sound from the seismic surveys might have caused acoustic trauma and decompression sickness and, ultimately, a slow and painful death.

It seems that marine mammals don’t receive the protection they need in Norway and have to choose between adapting to human impacts – if they are able – or else moving to another area.  Significantly, the only area of the Norwegian coast not yet impacted by seismic surveys is outside Vesterålen and this year,  the whale watching boats and researchers noted higher whale numbers, especially pilot whales. I could recognize at least one familiar whale group that now spends the summer months in the Andfjord instead of the Vestfjord. Did this change in distribution occur because of the seismic surveys?

We are currently investigating this and other possibilities, including climate change. We will be writing up our findings and will be sure to share our information with WDC.

Marine mammals in Norway urgently need our help and my hope is that, with the support of WDC and others, we will look for solutions, which include raising public awareness, both within and outside Norway and crucially, approaching the Norwegian government to initiate an open dialogue and bring about much-needed change.