For this instalment in the Forgotten Dolphins series, WDC residential volunteer, Naomi Bentley, shines a light on the plight of captive beluga whales.

SeaWorld’s announcement this year of ending their captive orca breeding programme, and ‘phasing out’ live shows, is news WDC was especially heartened to hear. This means these orcas will be the last generation in SeaWorld’s parks, and paves the way to ending their suffering. The 2013 documentary ‘Blackfish’ brought the horrors of the capture years to the forefront of public attention, revealing an industry which separates juveniles from their family and natural habitat. This film was a major milestone for the captive orca campaign and exposed the lengths the industry will go to keep the public ‘entertained’.

However, while this was good news for orcas, it begged the question as to what will happen to the other 168 whales and dolphins kept in unnatural concrete tanks all across SeaWorld’s parks? This huge number is made up of many species, including 15 beluga whales. SeaWorld holds 3 of these whales in Orlando, 7 in San Antonio and 5 in San Diego. Half of them wild caught from Hudson Bay in Canada.

A popular attraction at marine parks for decades, belugas have proven to be a big hit with the public partly due to their striking white appearance and peculiar characteristics. Belugas have the ability to move their heads freely – due to their non-fused vertebrae – and the capacity to change their facial structure. 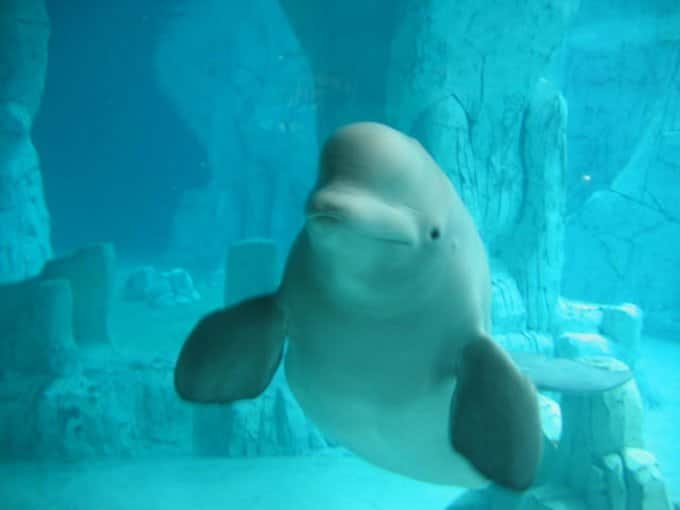 Common practice in all marine parks is transferring belugas between different locations. On February 7th 2016, six belugas were traded between SeaWorld Orlando, Chicago’s Shedd Aquarium, Georgia Aquarium and Mystic Marinelife Aquarium in Connecticut. The pools were drained out and the belugas were harnessed before transfer by plane. Each time is a major stress-inducing experience for the whales.

One of the oldest captive belugas in the world today is a male named Ferdinand who was captured in 1975. He spent his first thirty years in a tank at Duisburg Zoo in Germany before being transported to SeaWorld San Diego in 2004, where he remains today.

In the wild, belugas are distributed in the Arctic and sub-Arctic regions of the northern hemisphere. Discrete populations are found from the west coast of Greenland westwards to Svalbard and all along Russia’s northern coastline. Resident populations also occur in Cook Inlet in Alaska and the St. Lawrence River system in Canada.

Many populations travel hundreds of miles in summer months to reach calving grounds, demonstrating an impressive annual migratory pattern and showing just how far ranging their habitat use can be. It is not possible to replicate any aspects of this environment in a tank. Echolocation and vocalisations are used not only to communicate with each other, but also to hunt prey: a behaviour which is made redundant in captivity as they are routinely fed dead fish.

Daily life for belugas in captivity is repetitive and mundane. Their new home will be a barren tank where they will spend the rest of their short life, with no natural currents or live food to hunt. They will not see their pod members again; nor will they travel miles freely every day like their wild counterparts. Belugas in the wild can live up to 60 years and yet in captivity they rarely live beyond 30, and frequently do not pass 25.

Trainers teach the whales to perform tricks in exchange for dead fish from a bucket. This ‘performance and reward’ concept is an age-old method to get a a whale to comply: what SeaWorld’s portrayal of care and ‘conservation’ is built upon.

During shows, the whales are expected to perform the repetitive routines and tricks for the amusement of paying customers, all with the white noise backdrop of rock music. When the show is over, the belugas can only swim within their confinement while onlookers press their faces against the glass of their small tanks.

Beluga capture is still legal in Russia and is no less cruel than orca capture or dolphin drive hunts. Ripped from their family groups and ocean home, it is the youngsters that are targetted as they are the ideal, easily-trainable choice for export to international marine parks in China as well as fuelling the trade for the Russian domestic market. The young belugas are encased in nets, loaded onto trucks and transported many hundreds of miles across country to their new home. Mothers and other pod members are left in the aftermath of the capture and cry out for their young long after they are taken away.

Last year, Georgia Aquarium was stopped from acquiring permits to import 18 belugas which had been caught from the Sea of Okhotsk in Far East Russia as the legislation in Russia allowing the capture fell far short of US standards.

In the wild, females mate only when a large group of males are in attendance. In a captive environment, this cannot be replicated as the choice is limited to the only other available mates at the park, and therefore many breeding attempts fail.

The figures speak for themselves as they show since 1992 in five different U.S. marine parks, 49 belugas have died prematurely. Again, in the last 9 years five belugas have died at Georgia Aquarium: and in 2015 a calf was born and died after less than a month.

SeaWorld’s ‘care team’ who oversee the belugas’ welfare often prescribe a perpetual regimen of antibiotics and anti-anxiety medications. If mood stabilising drugs and constant medications are needed is this not evidence to prove that they are not suited to their captive environments? If belugas thrived in captivity as they do in the wild, they would not need to be so heavily medicated in order to survive in their confinement.

Belugas and all captive cetaceans need your help. What can you do to help put an end to this? It is easier than you think: just never buy a ticket to a place where whales and dolphins are held captive.

WDC’s latest campaign is asking British Airways to stop selling trips to SeaWorld. A recent survey found that 86% of British people do not agree with captivity, and so surely the UK’s largest airline should reflect this public opinion!

Please support our campaign and sign the petition now.