Four orcas, including a young calf, who had become trapped in ice near Sakhalin Island just metres from the shoreline have been successfully freed. Rescuers, along with volunteers from the local community, worked together to break up the ice and initially two females and a calf were able to escape. The team then had to wait for a high tide and worked through the night to help the remaining male orca, who the team had named “Willie”, to escape the ice. He was eventually escorted out to deeper ice-free water. With little food, the whales would have faced exhaustion, and ultimately, death by starvation or suffocation when trapped like this. 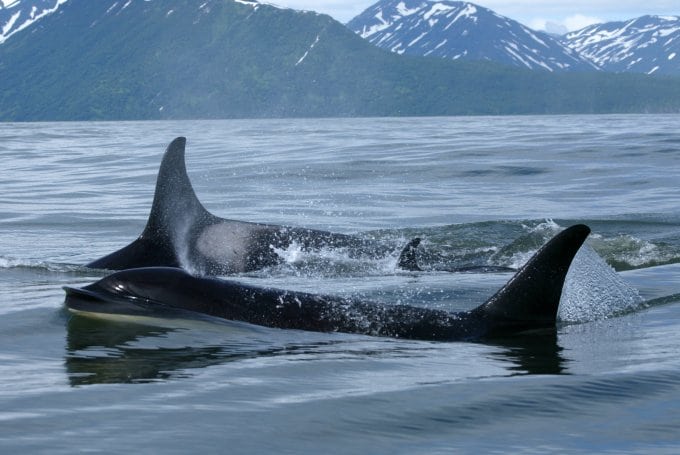 WDC’s Research Fellow, Erich Hoyt, has provided this update after talking to colleagues at the Far East Russian Orca Project:

The incident took place in the ice off Southeast Sakhalin Island, not far from Yuzhno-Sakhalinsk. Yesterday, three of the whales were freed and able to swim away, and the ice field was still wide at that time. There is a good chance that they have survived. That left a big male, who in the videos (see link below) looks to be a mammal-eating killer whale. He couldn’t move at all. (Apparently, there may have been a fifth whale trapped some 40 kms from the village, too far away to attempt a rescue. There is no further news on this possible fifth whale.)

Yesterday as the tide was going out, local people worked hard to keep the big male alive. He was exhausted and getting very weak. At one point in the video you can see that he rolls on his side. People, entering the water, managed to right him, and then he spouted. Eventually the sea began rising and, in the night, some of the ice cleared. People stayed with the big male and began to clear the remaining ice to create a corridor. After the waters reached about 2m deep, the male still wouldn’t move, so the local people tried to guide him. Eventually in the night he did start moving and swam off to the open sea, hopefully to recover.

The Russian TV news RT ran various news clips showing the workers and volunteers freeing the whales from what would have been certain death. You can see a summary of their report in English. And there is a story with more video and good photos from Roman Grishanov.

So who is this remarkable instant Russian rescue team coming to the aid of wild orcas? It seems that it included a wide range of people. The Ministry of Emergency Situations sent a team who were allowed to conduct what were surely risky operations. The local collective fishing plant (kolhoz) was there, plus a local vet, divers, and volunteers from the Yuzhno-Sakhalinsk community including the youth eco-education and tourism Club Bumerang, with the head Vyacheslav Kozlov. Coordinating all this effort was the marine mammal coordinator from Sakhalin Energy, Peter Van Der Wolf who contacted scientists and other specialists. Without all these people working together, the operation might not have been successful.

Bravo and huge thanks to the Yuzhno-Sakhalinsk community for helping to save these orcas.