Dr. DA Giles is the research director for the Center for Whale Research (CWR), now in its 40th year of studying the Southern Resident orca population.  In the first of a two-part Q&A packed with information about this unique community, she covers the history of the Southern Residents and where the population stands now.  In part two (coming later this week), she shares with us the history of CWR and the changes they’ve seen in decades of observing whales.

WDC: Currently, all orcas are considered to be the same species, but are they all genetically and culturally the same?

DG: In the midst of more than a decade of whale removal from the wild for captive display (which ended in 1976) early killer whale researchers in the US and Canada realized that each individual whale could be identified by their unique white markings and by the shape and size of their dorsal fins.  They also discovered that there were different kinds or “ecotypes” of killer whales frequenting the waters of BC Canada and Washington State; one group ate only mammals while the other group ate only fish.  The fish-eaters, traveling in larger groups and returning to the inland waters of the Salish Sea each spring became known as “Southern Residents” and “Northern Residents,” while mammal-eaters became known as “transients.”  Interestingly, although their ranges overlap, Northern and Southern Resident fish-eating populations do not interbreed.  Further, while the fish eating and mammal eating orca populations are often seen in the same waters at the same time of year, they also do not interbreed, and appear mostly to ignore each other.  We now know that there are at least 10 genetically and culturally distinct “ecotypes” of killer whales found throughout the world’s oceans. 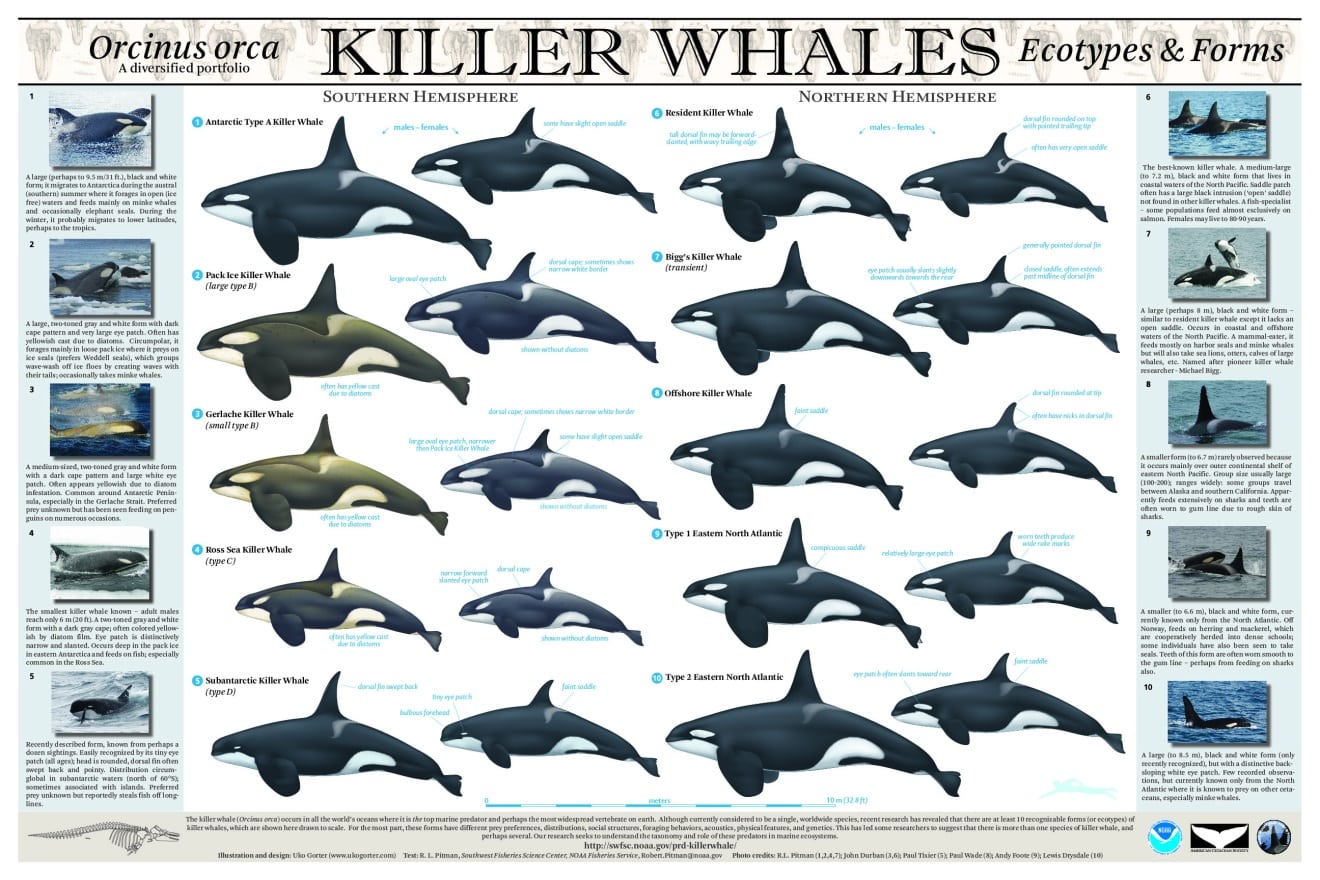 WDC: Who are the Southern Residents and why are they a “Distinct Population Segment?”

DG: Resident killer whales are unique because they live in highly structured matrilineal societies and because neither sex disperses from the natal group (both male and female calves stay with their mother).  They are most often observed in groups of related individuals known as pods, with each pod having a unique dialect. Pods that share overlapping vocal calls with other pods are considered to be in the same clan. Whale pods frequently observed together in the same range are considered to be members of the same community or population. The Northern Resident community is comprised of three clans, and the Southern Resident community is considered to be a single clan. The two “resident” populations are acoustically, culturally, and genetically distinct, and both are recognized and managed by the U.S. and Canadian governments as distinct stocks or populations.

There are currently 85 killer whales that have the legal designation of being a “Southern Resident” killer whale (SRKW); 84 animals swimming free in the wild and one captive female being held at a marine park in Miami, Florida.  As mentioned above, research on the mitochondrial DNA of these whales show them to be a genetically and culturally distinct population of killer whales that have not interbred with the local mammal-eating killer whales for more than 700,000 years.

WDC: This population is listed as endangered under the U.S. Endangered Species Act: What brought this population to the brink of extinction and what is impeding their recovery?

DG: Three key issues that are negatively affecting the SRKWs are decreased food availability, toxicity build-up over time, and increasing vessel traffic and associated noise.  Each threat compounds the effects of the others; for example, food-stressed individuals metabolize their blubber stores, releasing toxins that can impair immune and reproductive functions. Noise from all types of vessels may increase the difficulty of foraging and/or cause the whales to expend more energy to find prey and communicate.

WDC: As an indicator species, Southern Residents reflect the health of their ecosystem. To what extent is their decline and struggle to recover an indicator of broader ecosystem problems? In what ways could increased habitat protection address their problems?

DG: SRKWs are important from a global ecological perspective because, like all whales, their large biomass allows the marine realm to retain more carbon compared to having a large number of smaller animals that would eat the same amount of food.  Furthermore, when whales die, their carcasses sequester carbon at the bottom of the sea, and provide habitat and nutrient-rich detritus for plants and animals lower in the food web.  Whales have also been identified as ecosystem engineers that feed the environment and promote biodiversity via fecal deposits that disperse nutrients such as iron and nitrogen which are quickly utilized by phytoplankton at the very bottom of the food chain.  Birds and fish have also been observed foraging on killer whale fecal matter floating on the surface of the water or in the water column. 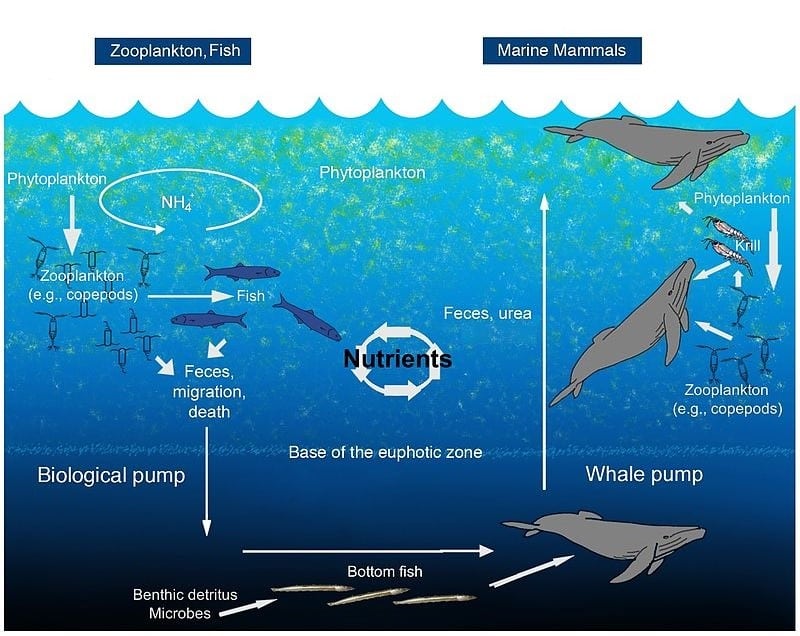 The SRKWs are of great ecological and scientific importance when it comes to assessing the risks and impacts of environmental factors on human populations, and for other fish-eating marine mammals such as seals and porpoises.  Quite simply, the salmon they eat are the salmon we eat; the toxins they ingest are the toxins we ingest.  The SRKW Recovery Plan listed excessive toxicant exposure as a primary risk factor to this whale population.  Persistent organic pollutants (POPs) are a group of toxic chemicals associated with adverse health effects including endocrine disruption and reproductive failure.  The SRKW diet of Chinook has been highlighted as their most likely source of exposure to POPs.  These toxicants are extremely lipophilic (readily stored in fat) which promotes bioaccumulation, particularly in those at the top of the food web.  Studies examining SRKW exposure to POPs have reported levels of PCBs, PBDEs, and DDTs that far exceed an established health-effects threshold.  Research findings have linked exposure to these contaminants to a range of deleterious biological impacts, including disruption and/or suppression of the reproductive system, thyroid dysfunction, and increased risk of infection.  As the population faces lack of prey, added stressors from multiple sources force them to burn their blubber layer, which releases these dangerous toxins into their systems.  With humans similarly residing at the top of the food chain, the ills that have befallen the SRKW provide a disturbing preview of the potential harm to humans should we fail to address the threats facing this population.  The SRKW population is providing us with the opportunity to learn about the deadly consequences of human behavior from an ecological and scientific perspective.  It is up to us to acknowledge that saving the SRKW and other similarly vulnerable species ultimately means saving ourselves.

Join us on Friday for the second installment of our Q&A with Dr. Giles, when we focus on the work done by the Center for Whale Research, and what they’ve learned about the Southern Residents since the 1970s.