In a report published today by Royal Society Open Science, researchers studying southern right whales in New Zealand have been able to estimate the impact of whaling on these whales and how their numbers have recovered in recent years.

Using various sources of data such as sightings, genetic analysis and known catch numbers, the team was able to work out that there were between 28,800 and 47100 whales at the start of the 19th century before whaling started. By the early part of the 20th century the population had been reduced to just 30-40 mature females. Further illegal whaling by Soviet whalers further reduced the population. Today, numbers have recovered to over two thousand, around 12% of the original numbers. The population is thought to be growing at around 7% p.a.

Southern right whales visits the coastal waters of New Zealand and other southern hemisphere countries such as Brazil, Argentina, Australia and South Africa to give birth every two to three years, which made them an easy target for whalers.

The New Zealand whales are part of the southwest Pacific population which includes whales that breed off southeast Australia. In New Zealand most of the surviving whales are found in the sub-Antarctic Auckland Islands, and the researchers believe some of these whales are new recolonising the waters around the mainland. 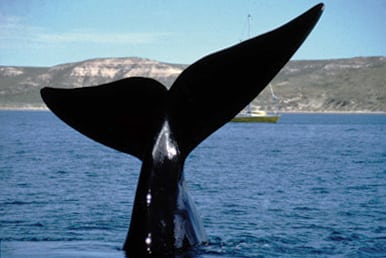