There are a wider variety of whales, dolphins and porpoises in the seas around Europe, and many opportunities to see them. We asked writer, conservationist and TV presenter, Mark Carwardine to answer a couple of questions from WDC supporters regarding whale watching.

In which country of Europe one can see the most variety of whales and dolphins species in one week time and in which period of the year?

Mark: It’s difficult to name just one, as there are many outstanding whale watching opportunities in Europe (and, of course, a lot depends on luck). For sheer variety of species, Norway is particularly good in mid-winter; for summer whale watching, it is quite possible to see several different species in a single day in Iceland, the Bay of Biscay, the Azores, the Canary Islands, France, Italy and Ireland. But, with a little luck, that’s possible in other countries, too (on several occasions, I’ve seen five species in a day in the UK).

Do you think that whale populations are in general rather profiting or suffering from whale-related tourism around Europe? Do you see chances or risks?

Mark: This is an important question. There is no doubt that whales, dolphins and porpoises can all be sensitive to disturbance by intrusive whale watching and poor boat handling; and, in the worst cases, they can be injured or even killed by propellers or collisions. Fortunately, in my experience, the majority of whale-watch operators in Europe are very professional. They care about the whales and are well versed in whale etiquette, abiding by local regulations or codes of conduct (careful and considerate whale watching is not only better for the whales, it is also better for whale watchers – the probability of a close and prolonged encounter increases the more relaxed the animals are). The best operators also put something back to benefit the whales: they help to raise money for whale conservation, for instance, and provide free places for biologists (who can’t afford their own boats) to do urgently needed research; and, with experienced naturalists on board, and informative commentaries, they drum up public support for whales. Whale watching can also be a major source of income for local communities, who are then more likely to take an active interest in protecting ‘their’ whales. So I believe that responsible whale watching can definitely benefit whales. We just need to encourage more regulations and codes of conduct, to ensure that it is done responsibly throughout the region, and we need to make sure that all whale-watch operators put the welfare of the animals before everything else.

Where in Europe is best for land based whale and dolphin watching?

There are so many places it’s hard to know where to begin! In the UK alone, I would suggest Lizard Point and Gwennap Head, in Cornwall; various vantage points in Sunderland, such as Souter Lighthouse and Whitburn Observatory; St. David’s Head and Strumble Head, in Pembrokeshire; New Quay in Ceredigion; Tiumpan Head on the Isle of Lewis; Rubha Hunish, on the northernmost point of Skye; Ardnamurchan Point, close to the most westerly point on mainland Britain, and Duncansby Head, overlooking Pentland Firth, in the Highlands; Chanonry Point, on the Moray Firth; Broughty Ferry, Dundee; and umpteen places in the Orkneys and Shetlands. It is even possible to watch bottlenose dolphins from the heart of the city of Aberdeen (Girdleness, where the River Dee reaches the North Sea at the city docks, is as good a place as any).

What’s the best way to watch whales and dolphins without causing any disturbance to them?

There is no universally accepted ‘good practice’ for whale watching, because the details inevitably vary according to the location and species. Some existing regulations are quite lenient, for example allowing an approach to within 30 metres, while others are much stricter (no closer than 300 metres). But, in very broad terms, here are some key considerations (this is not an exhaustive list):

* observe the animals carefully before approaching, to evaluate their behaviour and direction of travel

* never approach head-on, from immediately behind or from an angle of 90 degrees

* approach slowly (at a ‘no-wake’ speed)

* if the animals show avoidance behaviour, leave them alone

* do not stay too long

* when leaving, move off slowly (at a ‘no-wake’ speed) until the boat is at least 300 metres away

Mark Carwardine’s Guide To Whale Watching In Britain And Europe is comprehensive and authoritative guide coving everything you need to know about where, when and how to watch whales and dolphins. Whether you want to watch Blue whales in Iceland, bottlenose dolphins in Wales, narwhal in Greenland or sperm whales in Greece, this comprehensive guide is the ideal companion. More details here. 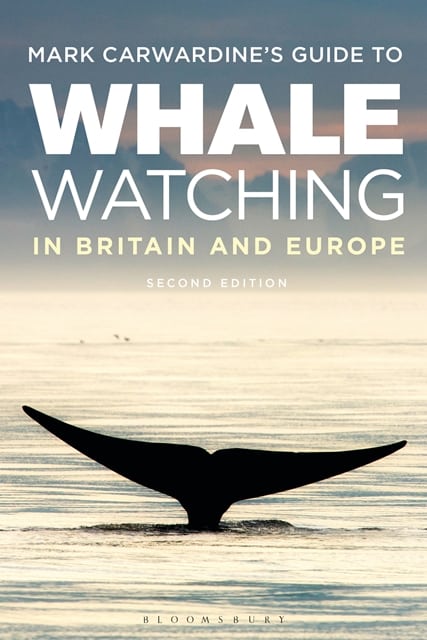