The death of any North Atlantic right whale (NARW) is bad news, especially when the death is accidental and avoidable. It is rare that any good comes out of such a situation. 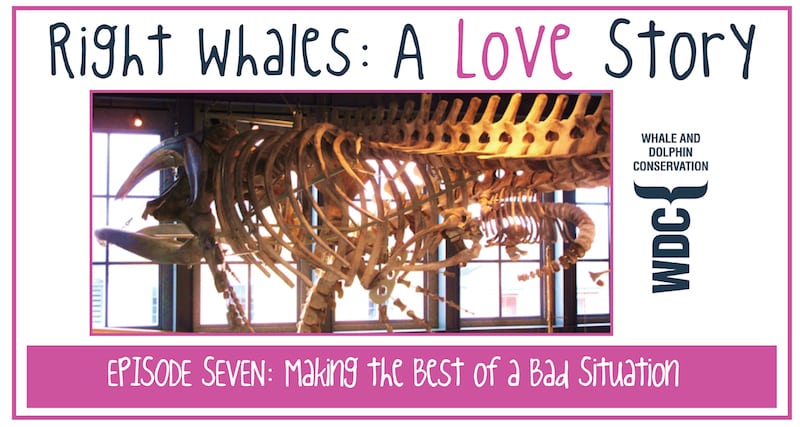 But, much like the data collected at necropsies can be used to help formulate measures to protect living whales, so too can the display of a skeleton be used to educate the public about the lives of right whales. So, when the New Bedford Whaling Museum’s President received a phone call in November 2004, from then-Trustee Michael Moore, of the Woods Hole Oceanographic Institution, about a NARW that had been found dead on a beach in North Carolina, we knew we could not pass up the opportunity to obtain this animal. Thus began the journey of Eg1909 from North Carolina to New Bedford. Ultimately, this 49 ft (14.9m), 15 year old female and her female fetus of 10 months, would be lifted to the ceiling of our Jacobs Family Gallery in November 2008. She would come to be nicknamed, Reyna, a variation on the Spanish word for queen, reina, an appropriate name for a whale hanging next to the blue whale skeleton, KOBO, King of the Blue Ocean.

Having these skeletons hanging in our lobby provides us with a teaching tool that is more powerful than mere words or a handful of bones that visitors can touch.

We have visible proof that ship strikes kill whales; that one deadly incident can kill multiple generations.

We have a rallying point for conservation efforts, no matter what their level of complexity may be. We can reach a wide audience of people, from several countries, and share the story of a whale species that may not have been known to them.

Since November 2008, nearly 540,000 people have come through the Museum’s front doors and have viewed this poignant pairing of a mom and her fetus, most likely the first such display in the United States. A large percentage of these individuals have read the panels that tell of Reyna’s story and have gained a greater understanding of the issue of fatal ship strikes.

Out of the crowd of half a million people that have seen our skeletons, more than 50,000 are students who came with their classes for our school programs. Having Reyna here generates a lot questions from these students, questions that delve into her story and the pain of getting hit by a propeller.

We have asked many of these students to be careful with their trash, to keep it out of the water and to recycle whenever possible. This is the easiest and cheapest (FREE!) way that they can be part of the solution…and they’re happy to do it.

Reyna has been the centerpiece of an event that we created here at the NBWM in 2010, Right Whale Day. Each year colleagues from Whale and Dolphin Conservation (WDC), New England Coastal Wildlife Alliance, NOAA, and artist/author Peter Stone have joined NBWM’s High School Apprentices to provide a variety of craft activities, artifacts, right whale drawing lessons, a coastal hazards obstacle course, and Delilah the inflatable right whale, for hundreds of kids who attend each April.  This year, Massachusetts Environmental Trust will join us.

On a more personal note, bringing Reyna back to New Bedford, with Michael Moore and Dave Taylor, and then later leading the project that got her composted, cleaned, articulated and hung, with all of the requisite meetings with engineers, architects, ceiling representatives, riggers, articulators and window installers, has created a connection to this species that exists in a small but lucky number of individuals.

So, when I was asked to participate in the campaign to eliminate the ‘sunset clause’ on the Ship Strike Rule, there was no hesitation. We got to feature Reyna in the “Act Right Now – Save a Species” campaign video and use Right Whale Day as a venue for getting conservation-minded people to sign the petition. 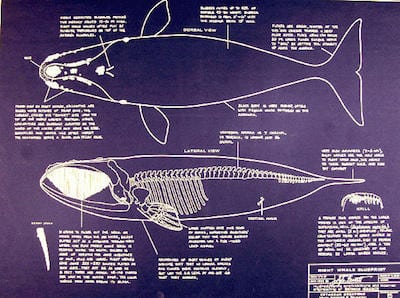 As a parallel to the campaign, Monica Pepe (WDC), Anne DiMonti (Audubon Society of RI) and I meet monthly to develop outreach materials, both printed and electronic, focused on the NARW. To date, we’ve created a CD for educators with a Power Point presentation and a variety of activities. We developed a Facebook page called Face-ing Extinction: The North Atlantic Right Whale, and through the generosity of several members of the North Atlantic Right Whale Consortium, we put together a slide show of impressive photographs. This slide show, titled The Journey of a Right Whale, is now available on Vimeo.

So, count on us to keep working together as honored hosts and active members of the North Atlantic Right Whale Consortium to expand protections for this endangered and beleaguered species. Their survival depends on these collaborations.

Bob Rocha is the Director of Science Programs at the New Bedford Whaling Museum and a friend WDC is lucky to have. WDC is grateful to our guest bloggers and value their contributions to whale conservation. The views and opinions expressed by our guest bloggers are those of the author, and do not necessarily represent those of, and should not be attributed to, WDC.

Make sure to sign our petition to increase Critical Habitat for North Atlantic right whales and help prevent tragedies like Reyna’s!