That was the first question I heard when I began to learn about the story of the North Atlantic right whale. It seemed a fair one to ask, and might have applied to any number of species. Who does care? Why not worry about other creatures, the bugs or birds or bears that also inhabit this earth?

It turns out that in such questions lies the answer. For when we consider the web of life that in reality “takes care” of us, we soon find that every organism plays a role in sustaining that web.

The more scientists I spoke to—beginning with Michael Moore at Woods Hole Oceanographic Institute, and Amy Knowlton, Scott Kraus and Moira Brown at the New England Aquarium—the more it seemed that not only science could teach us about the importance of every species in the ocean. It was actually a whale from whom we could learn.

That was the revelation to guide the mythological journey called Waltzes with Giants. A journey through twilight.

Built upon questions, the book aims to tell a science story, one based upon decades of passionate research, through a literary voice and visual art. While following the migration route of this perilously endangered mammal, those questions—asked by scientists and artists—also highlight the music of the oceans in poetic language and mystical images.

But how can we find poetry in arguments between scientists and governments, environmentalists and industries? Why should we care about creatures entangled in lobsterpot lines and not about the lobsterman trying to make a living and feed his family?

The book’s foreword asks these things and more.

What could be more imperative than the U.S. Navy’s ability to train and test personnel and weapons, ships and submarines, without being restricted by the presence of something that few of us will ever see? Suppose we don’t even know whether an animal is vital to the health of the lands and waters that nourish us?

Ah, but can we afford to take that chance? 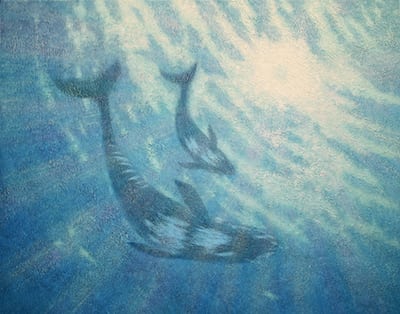 You see? As with good science, once you start asking questions, it’s tough to stop.

What if there is knowledge out there that we have yet to acquire? “We are terrifyingly ignorant,” says farmer and author Wendell Berry. “…The acquisition of knowledge always involves the revelation of ignorance.”

Besides, even if some of us don’t care, is it our right to vanquish any other being from the realm of existence? And what are the costs of throwing away several hundred million years of evolutionary wisdom that each species possesses?

In other words, can we afford to miss the real-time lessons learned from an organism we have studied in great depth? Perhaps we need to regain a sense of wonder for the world around us, to observe and imagine, and to learn some humility and respect for the things we do not know.

The passion of many dedicated scientists is behind what we do know of this endangered creature. It also fueled the paintings and words that were inspired as much by the right whale itself.

Yet, the North Atlantic right whale is still highly endangered, impacted daily by the pressures we consumptive two-legged creatures place on the oceans.

Because the story is not yet done. Keep in mind the image of twilight. Twilight does not only precede the descent into darkness. Half the time, it foretells the coming of the dawn. 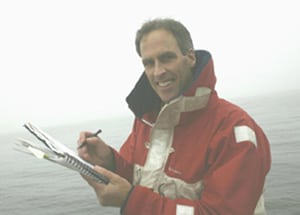 Peter C. Stone’s Waltzes with Giants, The Twilight Journey of the North Atlantic Right Whale (Skyhorse, 2012) is a selection of the Children’s Book-of-the-Month Club and a winner of the USA Best Book Awards in Children’s Hardcover Non-Fiction.

His newest book is Dreams to Dance in Moonlight, Ways of Seeing Feeling & Imagining (Outskirts, 2014).