Yesterday, China broke the news that it was finally to recognise and address animal welfare within its national legislation. Wildlife in China is currently protected by “The Protection of Wildlife Law” introduced back in 1988. However, the welfare of the individual animal isn’t recognised. This is a crucial omission as authorities are hampered by the current law and its restrictions. As it stands, the law is actually far from protective as there are no regulations to punish those who hurt or abuse wildlife. Given that the bill also only covers wildlife “in the wild”, those held in captive facilities are not protected by existing legislation and there are no standard regulations covering living or breeding conditions of captive wildlife – something this amendment will be looking to address. WDC hopes that this step will help address many of the issues affecting the import and keeping of whales, dolphins and porpoises currently in captivity in China. 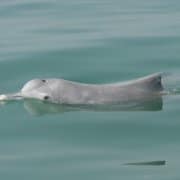 An in-country source told WDC “This is wonderful news that will improve both conservation and welfare efforts for China’s wildlife. I admire China’s continued strengthening of wildlife policy and look forward to seeing the success of this bill.”

This is a big step for China and one that should be applauded however before the world could catch up, half way around the world another story broke, this one detailing the barbaric capture of dozens of baby elephants in Zimbabwe, destined for parks and zoos in China. As they are seen to give with one hand, they take so painfully with the other. The circumstances surrounding the capture of these young elephants remains unknown but their fate does not. Already being transported overland to Mozambique, they will be loaded onto a sea container where they will slowly make their way to their new homes, thousands of miles away from their families. Although the fault for the capture must lie at Zimbabwe’s door, the demand came from China, where the legislation to consider and enact animal welfare provisions is even more important than ever.

Clearly there is a long way to go on the animal welfare road in China but … as the Chinese philosopher Lao Tzu said “the journey of a thousand miles starts begins with a single step”. Let’s just hope it’s a sprint to the finish line!