This week, guest blogger Jeff Ventre helps to explain the devastating legacy of captivity for the Southern Resident orcas – why they are still affected by captures that happened decades ago.  These efforts devastated their population, and they are still struggling to recover.  Today, they face threats like prey depletion, pollution, and noisy waters.  Helping to restore salmon populations in the Pacific Northwest is one way we can fight threats to the Southern Residents – please add your voice to our Letter of Support for removing the four Klamath River dams! 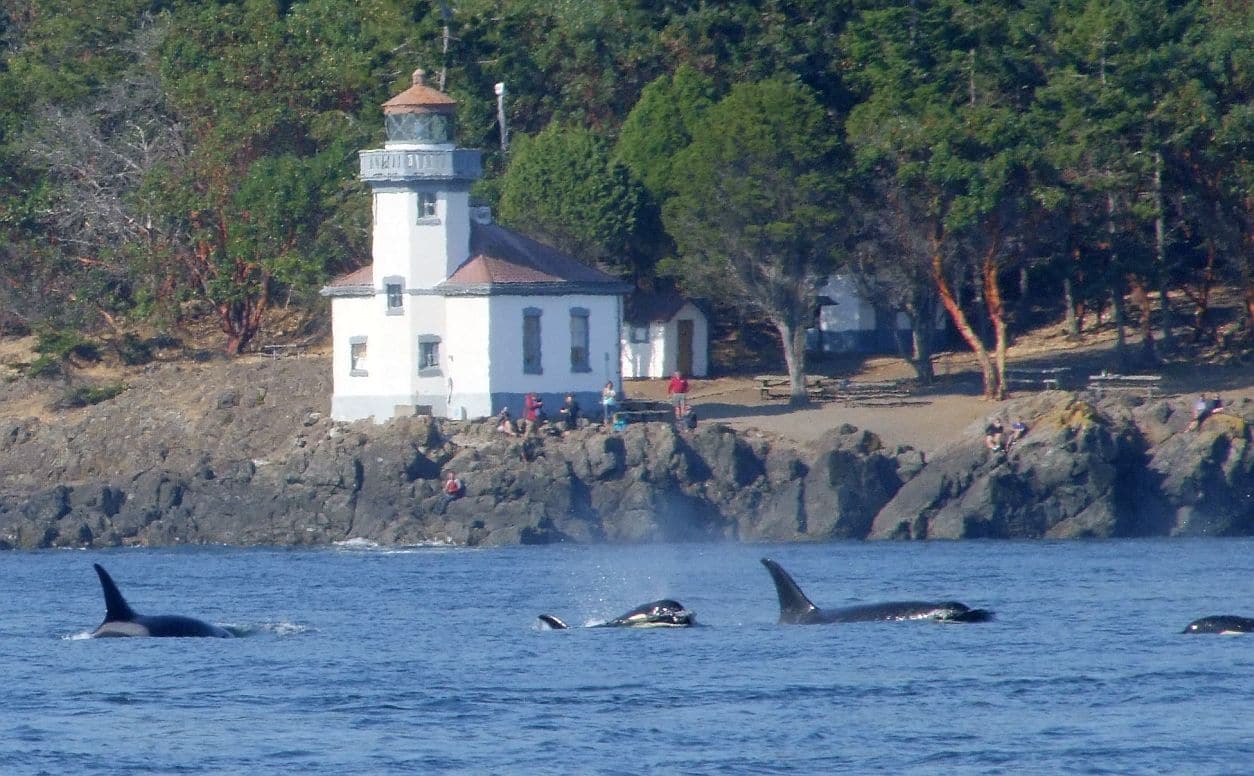 As a former trainer at SeaWorld, I had first-hand experience providing misinformation to the public, examples of which are depicted in the movie “Blackfish.”  This included parroting false lifespan data during “education shows,” claiming that dorsal fin collapse is commonplace in wild orcas (it’s not) and also calling teeth drilling & flushing “superior dental care.”

Another line repeated to the public was that food deprivation was never used. We’d say, “the whales get their food every day, regardless of behavior.”  Not true.   The whales were routinely withheld food, especially in the context of VIP shows, like when August Busch would visit the park, or when key animal separations were needed. The command was, and still is, “hold the animals at half-base.”

Translation:  If an orca, such as Tilikum, received 220 pounds of food as a daily base amount, it was an order to hold him at 110 pounds to ensure that he was “properly motivated.”

In general, SeaWorld spends a lot of time grooming its trainers, animal care specialists, and education staff with corporate talking points that promote captivity and portray the happy Shamu image.  For trainers, this included mandatory public relations classes to learn the “correct answers” to questions and voice training lessons to project your lines with confidence and authority. And if you wanted to stay employed, or have access to whales, you did what you were told.  Based on conversations with current trainers, things haven’t changed.

One of the most dubious claims made by SeaWorld trainers is that having orcas in their concrete tanks helps to conserve wild populations. They cite the decline of the Southern Resident killer whale (SRKW) population as a prime example as to why captivity is necessary. I cringe when I hear that whopper, like at the end of this interview with a current trainer.

Here’s the rub. The Southern Residents, with over 120 members before the capture era, pre-1965, are endangered because of SeaWorld, and remain that way due to dwindling salmon populations. This clan, the J, K, and L pods, has been unable to rebound from collections that removed greater than 40% of their members, leaving just 70 whales by 1976. At that point, SeaWorld was kicked out of Washington State. Here’s a video of former Washington Secretary of State, Ralph Munro, describing what he witnessed in March of 1976, at Budd Inlet.

Griffin and his partner Don Goldsberry focused their energies on the acquisition of more live orcas. In October of 1965, at Carr Inlet, Washington, USA, they collected a young Southern Resident killer whale after harpooning and killing her mother.

“Shamu” was Griffin and Goldsberry’s first successful live orca capture. She was 14 feet in length and approximately 2000 pounds.  “She-Namu” was originally intended as a companion animal for Namu. But putting a young Southern Resident female with an older Northern Resident male didn’t work out.

“When I [was] in the water with Namu, even riding him, this whale would ram Namu with such force that it might have killed me. And when I was [swimming] in the water with Namu, the whale would ram me, but not as [seriously] as some of the times that she rammed Namu. I thought this was child’s play at first but it became quite serious. SeaWorld had come to Seattle and was very interested in acquiring a killer whale for their new facility in San Diego. They wanted to call the whale Namu and they wanted the rights to the name, and I wouldn’t do that. So they said okay, we’ll… call her Shamu, and that’s how it all started. So Shamu went to San Diego and Namu stayed in Seattle.”

The orphaned Southern Resident “Shamu” was sold to SeaWorld for $75,000, and thus began the company’s decimation of SRKWs in the Pacific Northwest. Keep in mind that SeaWorld has never released a killer whale back into the ocean, argues against sea pens or release for captives, and has no intention of letting “corporate assets” out of its concrete enclosures.

According to the Center for Whale Research, 45 Southern Resident killer whales were delivered to marine parks around the world, with the most going to SeaWorld parks, and at least 13 more were killed during the capture operations. As reported by diver John Crowe in Blackfish, the hunters preferred smaller, younger animals. So, if you count the larger, undesirable animals that were corralled and released, the total number of Southern Residents “caught” is well over 200. This includes 80 orcas rounded up at Penn Cove in August of 1970. And these numbers do not include some Northern Residents (like Namu) or Transients (mammal-eating orcas), like Kanduke, who died at SeaWorld of FL from a mosquito borne virus in September of 1990. 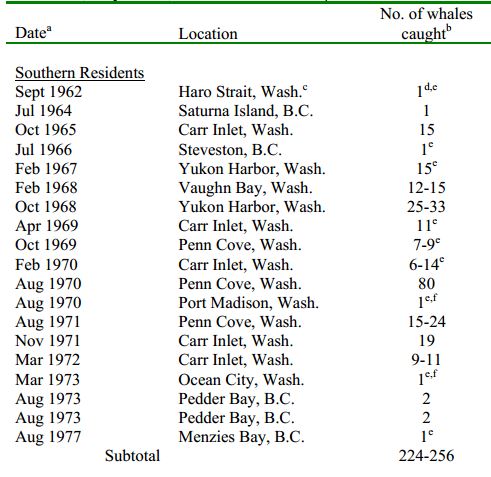 According to an investigative report by ABC10 News, in 2007:

“Griffin made no apologies about the whales that died in the hunt, including Shamu’s mother. Griffin shot her with a harpoon and she drowned.”

The profits from Namu and Shamu triggered the formation of a multi-billion dollar franchise and marine park industry. Griffin and Goldsberry became the primary whale hunters for SeaWorld, with Goldsberry reportedly becoming SeaWorld’s “Vice President of Animal Collections,” and both accrued immense wealth. Unfortunately for the whales, Namu survived only 381 days at the Seattle Aquarium, and Shamu lived only six years at SeaWorld in California. But a new lucrative business model had emerged; one that relied on a fresh supply of live-captured orcas to replace the ones who died young. From 1965 to 1976, the whale hunters collected and delivered (or killed) about 58 SRKWs. Watch another former SeaWorld orca hunter, Jeff Foster, describe hunting killer whales in this recently released footage via CNN. 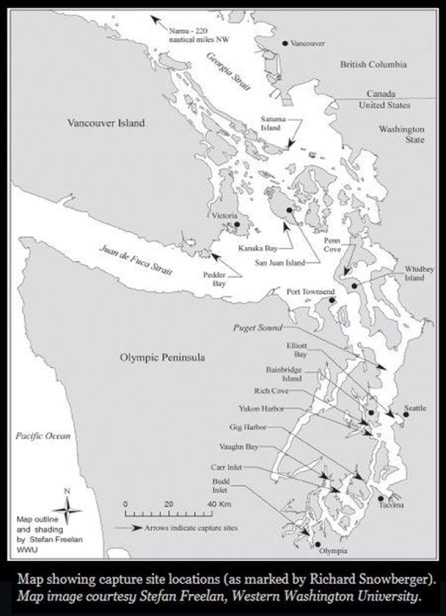 Map from “Puget Sound Whales for Sale” by Sandra Pollard.

Public concern over the captures, among other factors, helped trigger the passage of the Marine Mammal Protection Act by the U.S. Congress in 1972. In Washington State, public outcry over live captures led to the ejection of SeaWorld, by name, from those waters in 1976. After that, Goldsberry, a SeaWorld Vice-President, moved on to Iceland, as did Jeff Foster (mentioned above). Griffin had stopped. But this business model remained operational for two decades, until Kalina, the first “Baby Shamu,” was born in 1985.

From a population standpoint, the damage was significant. For reference, wild killer whale females have their first viable calf around the age of 14, have about a five-year birthing interval and require 17 to 18 months of gestation to produce a 300 to 400 pound calf. Even under optimal conditions, it would be difficult to replace the missing members of the clan, but especially when younger animals have been taken. To make matters worse, salmon populations have declined steadily over the years due to loss of wetlands and riparian areas, toxins from industry, factory fish farming, and the negative impacts from hundreds of dams in the region.

History aside, SeaWorld has an opportunity to help increase salmon for the Southern Resident killer whales; a chance for a karmic pay back, per se. It could use its influence to aid salmon recovery efforts in California, Oregon, and Washington.  Political leaders could be encouraged, by SeaWorld, to vote for the removal of unnecessary dams that block salmon migratory pathways far inland. As an example, The Elwha River Restoration Project has been both a great success and one of the most heart-warming environmental stories in decades. The corporation could develop true educational shows that reach out and activate millions of guests to “save the whales.” It could teach children water conservation steps and adults how to reduce the use of pesticides and lawn products which contaminate waterways and hurt fish. SeaWorld could join corporate partners, especially large grocery stores & restaurant chains, to discourage them from purchasing and selling farm raised salmon. With its large marketing and public relations resources, this gesture could become a national effort to save a unique and iconic group of whales. An effort like that would earn the respect of a new generation of guests for their parks. It would be a win for the whales, a win for the environment, and a win for SeaWorld.

Footnote: A female named Wanda lived for a day at Marineland, in Los Angeles, after being harassed and netted by hunters of the now defunct Marineland of the Pacific; and after swimming into Newport Harbor, CA, in 1961. And yes, Moby Doll lived several weeks after being harpooned & shot several times by the Vancouver Aquarium in 1964; but the beginning of the industry began with Namu, who was successfully captured in good health, and with the intent to display. 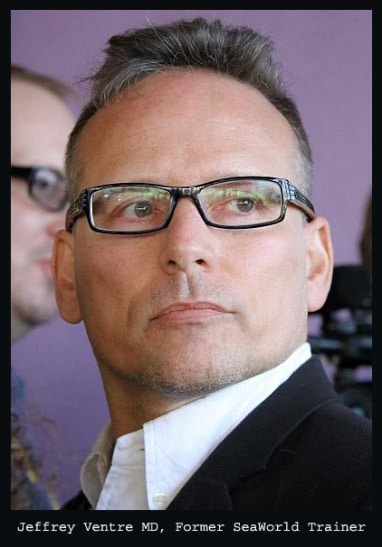 Bio: Jeffrey Ventre is a medical doctor licensed in the state of Washington and is a board certified specialist in the area of Physical Medicine and Rehabilitation. He treats patients with disabilities ranging from spinal cord & brain injury to low back pain, carpal tunnel syndrome, and amputations. He is (also) a doctor of chiropractic, and continues to use spinal manipulation as a complementary therapy in his medical practice. Jeff was a marine mammal trainer at SeaWorld from 1987 to 1995. He worked with John Jett PhD, Samantha Berg, and Carol Ray, at SeaWorld in Orlando. The four ex trainers continue to spread the word regarding cetacean captivity as a group known as “Voice of the Orcas.”