Reports of dead dolphins washing ashore with gunshot wounds in the Gulf region have been scattered throughout the media since 2012, suggesting that a more recent and disturbing trend of targeted vandalism might be surfacing. Compounding the concerns surrounding these earlier reports was the fear that these carcasses, washing ashore in Louisiana, Mississippi, Alabama, and Florida might just represent only a few of the many possible incidences of such lethal interactions between humans and wild dolphins. 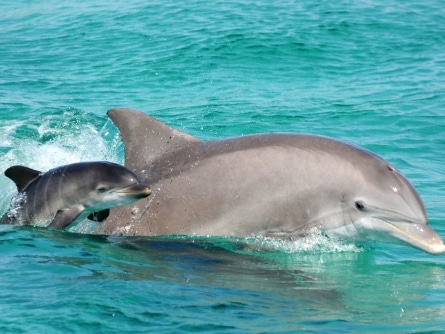 These fears may be well-founded. The National Oceanic and Atmospheric Administration’s (NOAA) Office of Law Enforcement is investigating the most recent dolphin crime involving a pregnant bottlenose dolphin found dead on Miramar Beach in the area of Destin, Florida. A necropsy revealed the dolphin died of a gunshot wound. She was within weeks of giving birth.

Necropsy results showed the animal was shot on the upper right side, likely with a small caliber firearm. The bullet was discovered lodged in the dolphin’s lung. It’s possible the dolphin may have been shot 1-2 days before it was recovered.

WDC is offering a $2500 reward for information leading to the identification, arrest and conviction of the person or persons responsible for the illegal and cruel acts that led to the death of a protected bottlenose dolphin.

Harassing, harming, killing or feeding wild dolphins is prohibited under the US Marine Mammal Protection Act of 1972.  Violations can be prosecuted either civilly or criminally and are punishable by up to $100,000 in fines and up to one year in jail per violation. The Marine Mammal Protection Act is a federal law which makes it illegal to harass, hunt, capture, or kill, or to attempt to harass, hunt, capture, or kill, any marine mammal in waters under the jurisdiction of the United States. The Act protects all species of dolphins, as well as other marine mammals such as whales and seals.

Horrifying attacks on protected bottlenose dolphins in panhandle region of the Gulf of Mexico have occurred over the past several years and appear to be on the rise. Since 2002, there have been at least 17 documented cases of stranded dolphins with evidence of gunshot wounds, and with the majority (70%) occurring since 2010, revealing a continuing need for long-term vigilance and for the public to come forward with information to support law enforcement efforts. For some of these cases, it is unknown whether the gunshots happened before or after the dolphin’s death.

Unfortunately, other types of vandalism are also occurring. In June 2012, a dolphin was identified alive with a screwdriver lodged in its head and later found dead near the Florida-Alabama state line in Perdido Bay.

Last year, and in response to this large number of dolphin deaths over the period of just a few months, WDC established a reward for information leading to the identification, arrest and conviction of the person or persons responsible for these illegal and cruel acts. This reward is meant to assist ongoing and longer term efforts to prosecute these and other violations of the Marine Mammal Protection Act (MMPA) and support the continuing need for long-term vigilance from the public to come forward with information to support law enforcement efforts.

WDC does not take these crimes lightly. Unfortunately, the byproduct of dolphin habituation to human interaction in the region, including activities to swim with or feed these animals, is resulting in closer proximity and access to wild dolphins. The loss of fear and the expectation of being fed can result in dolphins approaching recreational and commercial fishermen looking for a hand-out, or stealing bait and catch from their lines. Dolphins can also feed on discarded fish from fishing boats and learn to associate these boats with an easily-accessible food source. Dolphins can be seen as a nuisance as a result, and are at risk for retaliation or vandalism from the public, as well as injuries from boats and propellers.

Dolphins in the region continue to face impacts from the Gulf oil spill, fishing gear entanglements, and habitat loss. WDC is disheartened that they are also subjected to these brutal attacks, and continues to seek information from anyone who may have details pertaining to these incidents, including any photos or video.

WDC supports the efforts to investigate and prosecute these depraved crimes. NOAA’s Office of Law Enforcement is actively investigating a number of other possible dolphin shootings along the northern Gulf Coast since 2012.

Anyone possessing information relating to such an incident is requested to contact NOAA Office of Law Enforcement at 1-800-853-1964 or a state wildlife law enforcement agency. Individuals can leave anonymous tips or identify themselves when providing their reports on the incident.