L120, the new calf who was just born in early September, has sadly gone missing and is assumed to have died.  L120 was the first new calf in the critically endangered Southern Resident population since 2012, and offered some hope for the group after two other members of L pod were confirmed missing and likely deceased this summer. 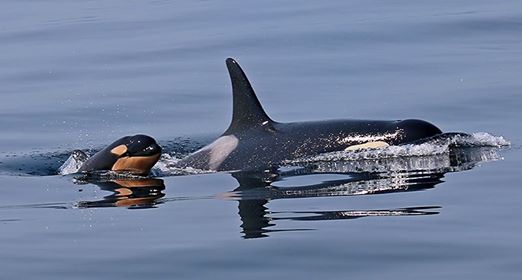 L120 was the third calf for Surprise! (L86), but was not seen with Mom in recent sightings by the Center for Whale Research, the organization that maintains the annual census of the Southern Residents.  Surprise’s second calf, Sooke (L112), died in February 2012 at 3 years old, and a necropsy revealed signs of severe acoustic trauma.

Southern Resident orcas are threatened by biocontamination – the accumulation of toxins and pollutants in their environment and subsequently in their bodies – and calves often bear the brunt of this danger as nursing mothers metabolize and offload their own toxic buildup through their milk.  Prey depletion is also a major threat to Southern Residents, and prey shortages can intensify the effects of other threats. Numbers of their preferred prey, Chinook salmon, have declined drastically in the Salish Sea and in rivers along the west coast in the last century.  Many salmon populations are endangered, threatened by habitat degradation and the loss of access to spawning grounds.  Increased vessel noise and traffic can cause acoustic masking for the orcas, making it more difficult to forage and locate prey.

This heartbreaking loss brings the Southern Resident population down to just 78 individuals, 20 members less than their peak count in 1995, and 10 fewer than when they were added to the Endangered Species List in 2005.  To help these beautiful and iconic whales recover, we must address the threats on multiple fronts – help restore salmon populations and habitat, reduce the amount of toxins both already in and entering our oceans, and minimize stress from vessel noise and traffic.  The amplifying effect of each threat upon the others means that there is no easy fix or single problem to solve.  It’s a complicated battle, but one worth fighting so we can give the next new calf their best chance at survival.