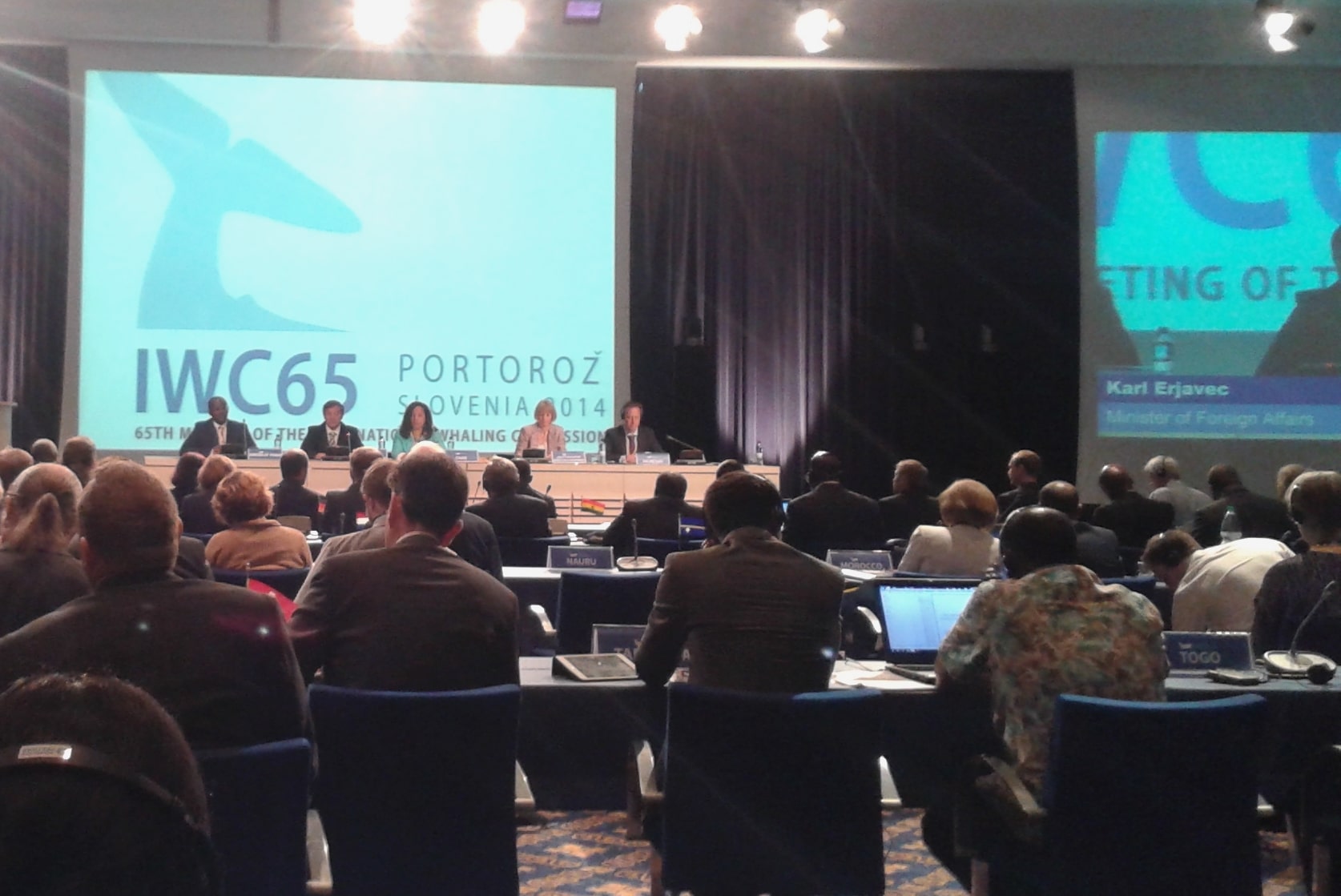 To an outside observer, meetings of the International Whaling Commission (IWC) can look like a throwback to one of Hans Holbein’s 16th century Danse Macabre woodcuts, with most delegates’ overtly ‘respectful‘ interventions a mere varnish on the vainglories of the whalers as they attempt to lay the groundwork to once more pursue whales to the brink. Yet the IWC, for all its apparently archaic protocols, remains the stalwart against the resumption of commercial whaling. Within its meeting rooms, the strategy of the whalers and their rhetoric of their allies are laid bare.

The IWC is not only a platform that allows whaling interests to pursue their course, but crucially, it also provides a forum for WDC and conservation-minded governments and NGOs to counter the whalers’ thrusts and advance conservation initiatives.  This year maybe, just maybe, will see a turning point when we look back on the successes and failures of the IWC in the 21st century.

Following the welcome decision of the International Court of Justice (ICJ) back in March to order a halt to Japan’s so-called ‘scientific whaling’ in the Antarctic, many pro-conservation countries came to this year’s IWC in the hope that the judgement would make Japan reflect on its abuses of ‘Special Permit’ whaling under Article VIII.

Japan had been staggered by the judgement of the United Nations’ highest court and may even have thought about abandoning its Antarctic whaling altogether, but the Japanese Ministry of Fisheries apparently still carries a lot of influence over other Japanese ministries and Japan decided to pursue a strategy of steering its way through the IWC meeting, almost as if the Court case had never taken place.

New Zealand came to the meeting determined to see the ICJ judgement appropriately reflected in the workings of the IWC but, despite its best efforts, was unable to get Japan to sign on to their proposal. This was all the more strange since  Japan, New Zealand and Australia, all directly involved in the ICJ case, are legally bound by the judgement. For Japan to reject the joint efforts made at the IWC to implement the ruling now puts it in a precarious position. The Court was clear in its expectations that its decision should be implemented by the competent body recognised by the Court, the International Whaling Commission.  In voting to accept New Zealand’s proposal, IWC members have begun the process of creating a new protocol on how to deal with Special Permit, or so-called ‘scientific whaling’.

Historically, countries wishing to issue themselves a ‘scientific’ whaling permit merely had to submit a proposal to the IWC Scientific Committee. From now on, proposals will be subject to some objective tests: is the hunting programme, including sample size, reasonable in relation to achieving the programme’s stated research objectives? Does the hunt actually contribute information useful for whale conservation and could research objectives be achieved by non-lethal means?

Importantly also, the resolution requests that no further special permits for killing whales are issued, either under existing research programmes or any new programme of whale ‘research’, until the Commission has decided that the ICJ judgement has been fully integrated into the working of the Commission and fully tested against its new criteria.

If Japan openly flouts the will of the ICJ by going against the IWC’s agreed procedures for Special Permit whaling, it will, at least in our view, be in contempt of the Court. What the international community then chooses to do, we shall have to see.

Whilst Japan’s Special Permit whaling is a significant part of its strategy to resume commercial whaling, its head-on attack on the global moratorium on commercial whaling came in the form of an attempt to obtain a quota of 17 minke whales from the Okhotsk Sea, east of Japan, for its commercial whaling programme. (These are the same whalers who already kill significant numbers of small cetaceans and who have been taking part in the Japan’s self-allocated ‘scientific’ whaling programme in the North Pacific.)  Whilst Japan’s allies in Africa, the Pacific and the Caribbean, obediently voted for the resolution, an overwhelming majority voted against Japan’s proposal, sending a message that, thankfully, the IWC still has the appetite to defend the IWC moratorium.

WDC also welcomes the Resolution on Civil Society Participation, which was passed by consensus! This basically means that NGOs will be able to have more of a say during IWC meetings in the future – a clearer voice for the defence of whales and dolphins.

We were delighted that highly-migratory species (including dolphins and other small whale species) received a very necessary boost!  A proposal by Monaco to address cooperation between the IWC and the United Nations on highly-migratory species of cetaceans split the IWC, with the whalers predictably opposed. However, there was outspoken criticism of small cetacean hunts by conservation-minded countries and great support for better protection measures for endangered species, including the Vaquita, Franciscana, Amazon River dolphin and the New Zealand (Maui’s) dolphin and the proposal was passed, meaning that the IWC has now challenged countries to do all they can to stop the whales´ smaller cousins from going extinct and allows the issue to be raised at the United Nations.

Unfortunately, a proposal by Latin American states for the designation of a South Atlantic Whale Sanctuary was once again defeated.  Frustratingly (but also encouragingly) falling only a little short of the required three-quarters majority. Again, it was the usual suspects who voted against the Sanctuary. Antigua and Barbuda were very enlightening when nailing their flag clearly to the Japanese flagpole, declaring that they would “only vote for such a sanctuary if the proponents voted for Japanese whaling”.  Despite this transparent and rather clumsy attempt by Japan’s allies to play ‘tit-for-tat’, the Latin American countries seemed encouraged by the support received and appear determined to bring the proposal back at the next meeting when it will hopefully receive the required majority.

A proposal by some of Japan’s recent African recruits – in effect, a thinly-veiled attempt to gain endorsement for future commercial whaling dressed up in a demand for ‘Food Security’ – floundered (this time at least) due to lack of support. This failure could be interpreted as a success of course, but remains a concern to us since the pro-whaling nations employed considerable emotive language around the issue, suggesting that it was vital to combine what it termed the “sustainable use of our oceans” with “satisfying the right to food and nutritional security of millions of people”. In other words, suggesting that it was a ‘basic human right’ to allow coastal communities to utilize whales as a means of reducing poverty and hunger. In dismissing the many developing countries who have instigated their own whale watching industries, the pro-whaling nations bitterly attacked what some regarded as NGOs and other conservation-minded nations making money out of whale watching and, tellingly, revealed that they, too, wanted “a piece of the whale action”.

What became clear to everyone but the European Union Commission, it would seem, was that Japan had embarked upon an emergent joint strategy between itself and Greenland to stand together in calling for ‘sustainable whaling’. Both nations also seemed to be using the concept of ‘food security’ to back their proposals, with Greenland arguing that it alone should be able to specify what it needs to feed its inhabitants and tourists – as long as its whaling was ‘sustainable’ – and Japan arguing that its whaling was, materially, no different to Greenland’s!

Unfortunately, the EU Resolution on aboriginal subsistence whaling passed and Greenland´s increased quota was granted. Whilst WDC fought hard against these two proposals, we were pleased that neither was passed by consensus, thus demonstrating that our concerns are shared by many countries.

So, in conclusion, it was a long and complicated meeting, but WDC certainly played its role. IWC65 was the culmination of months of effort and commitment as we lobbied and supported conservation-minded governments in order to get the best possible outcome for the whales. That work, of course, continues apace.

We will be seeking to:

Indeed, the decisions made at this IWC and their impact upon the various forms of whaling will continue to be a significant aspect of our work in the coming months and years.

You can see how the whole meeting panned out day-by-day and all the decisions taken at the meeting.

Thank you for your backing. None of this is possible without your continued support. We will continue to campaign for a world where every whale and dolphin is safe and free.